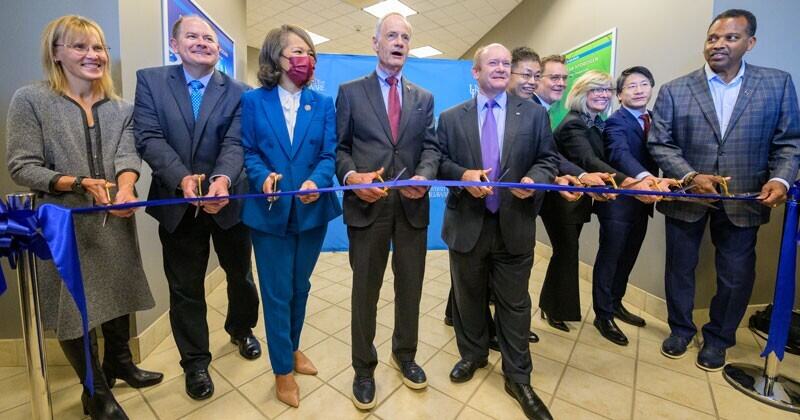 Clean hydrogen is a chemical and fuel that can be used to make many sectors of our economy carbon free. Its adoption, however, has been hindered by its lack of affordability.

The University of Delaware has launched the new Center for Clean Hydrogen to accelerate the transition to clean energy by reducing the cost of hydrogen and hydrogen-related technologies. Fueled by an initial $10 million in funding from the Department of Defense, the center will be led at UD by Yushan Yan, Henry Belin du Pont Chair of Chemical and Biomolecular Engineering.

By bringing together leaders in the hydrogen field from academia, industry and the federal government, the new center will serve as a one-of-a-kind facility for fabricating and testing hydrogen technologies such as fuel cells and electrolyzers at commercial scale. The center, located in Delaware Technology Park near the UD campus, also will help train the highly skilled clean energy workforce of the future. Additional funding and collaborators are expected as the center’s research and projects expand.

“Through the new Center for Clean Hydrogen, leading University of Delaware researchers will collaborate with their peers in industry and government to develop breakthrough innovations and shape the talent and workforce to leapfrog into the future. UD faculty and students will discover new ways to accelerate energy transition by reducing the cost of clean hydrogen and related technologies,” said UD President Dennis Assanis. “The center will be a real game-changer in clean energy research as a catalyst for positive impact on our planet.” 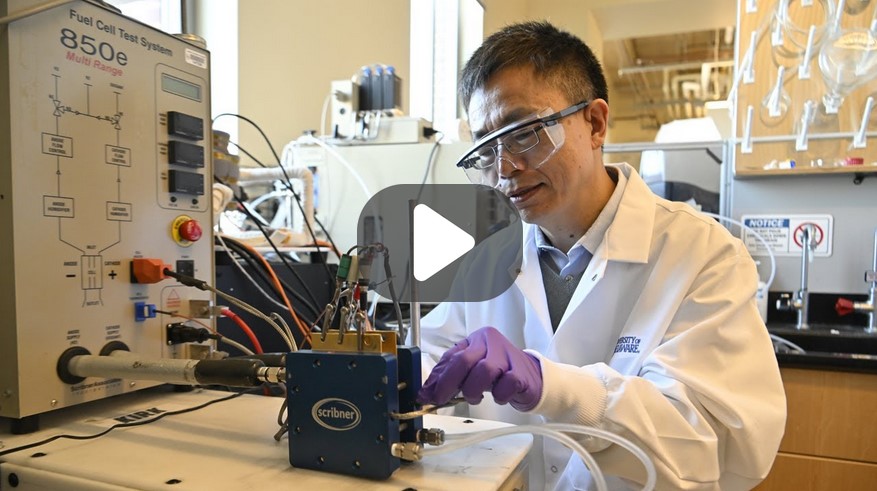 Collaborators in the new UD center include Chemours, Plug and the U.S. Department of Energy’s National Renewable Energy Laboratory (NREL), in addition to DOD. Chemours, which established its Discovery Hub on UD’s Science, Technology and Advanced Research (STAR) Campus in 2020, is a leading supplier of Nafion™ ion exchange membranes that are at the center of electrolyzers, devices that can split water into hydrogen and oxygen using electricity, and fuel cells, which combine hydrogen and oxygen to generate electricity.

Plug, headquartered in Latham, New York, is a leader in the manufacturing of electrolyzers and fuel cells, and NREL is leading the world in hydrogen research, safety and the development of building and equipment codes and standards for hydrogen production, storage and use.

Participants in the new collaboration, along with Delaware’s Congressional delegation, gathered Wednesday, Oct. 19, in Delaware Technology Park for a ribbon-cutting to mark the center’s official launch.

“Our planet is on fire, and if we want to combat the existential threat of climate change and position our economy for the future, we need to ensure that we are creating a nurturing environment for clean energy production,” said U.S. Sen. Tom Carper, chair of the Environment and Public Works Committee. “Clean hydrogen has a critical role to play in strengthening our country’s industrial sector and moving us closer to net-zero emissions by 2050. I am proud to help secure the funding for this partnership. Together, we can combat the biggest threat to our society today and grow our economy at the same time.”

However, the hydrogen used today is mostly produced from natural gas and has a huge carbon footprint. Therefore, clean hydrogen is critical in society’s effort to create a sustainable energy future. 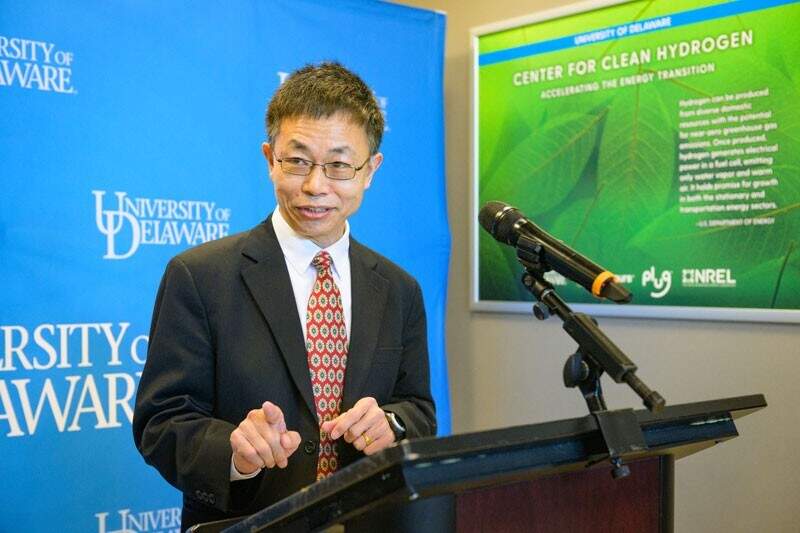 Speaking at the ribbon-cutting ceremony is Yushan Yan, who is leading the new Center for Clean Hydrogen.

“Solar and wind can do a lot, but without the help of clean hydrogen, there will be sectors of our economy that just can’t be decarbonized,” said Yan.

To advance this new energy frontier, the center will focus on developing better materials, designs and manufacturing processes at scale, all under one roof. This includes developing and testing water electrolyzers, carbon capture technology and heavy-duty fuel cells with the ability to bring cleaner transportation, energy storage and metals refining methods within reach. 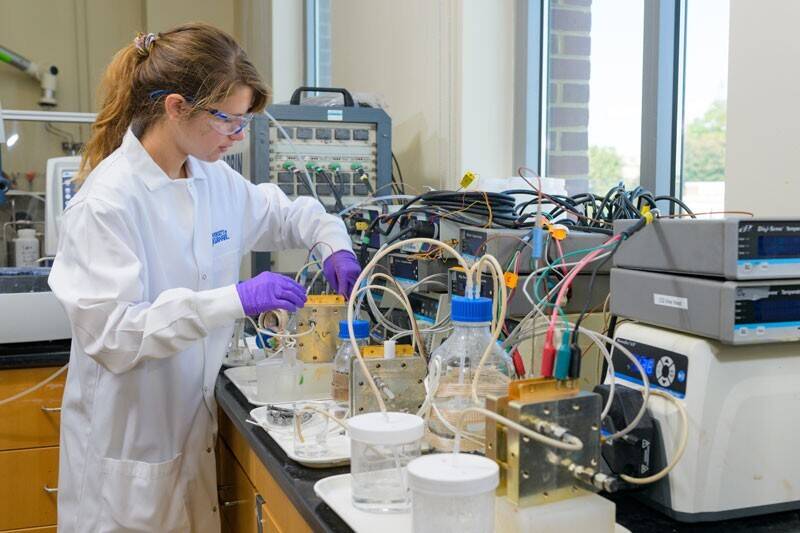 Rebecca Beswick, senior chemical engineering major, works in one of Yushan Yan’s labs. The new center will serve as a one-of-a-kind facility for fabricating and testing hydrogen technologies such as fuel cells and water electrolyzers at commercial scale, to bring cleaner transportation, energy storage and metals refining methods within reach.

Enabling this transition to zero-emission energy sources will require a shift in both energy technology and thinking.

“We’re trying to solve the most significant problems the field is facing, in order to accelerate the technology development so that hydrogen is economically competitive in many applications,” said Yan.

A place for collaboration, testing, training

The Center for Clean Hydrogen will be both a proving ground for new technologies and a training ground for the highly skilled workforce of the future, with UD graduate and undergraduate students involved in the work.

“Securing a clean energy future, utilizing sources such as hydrogen, creates a stronger workforce, a more robust and resilient economy, and a better, brighter future for our public health,” said Rep. Lisa Blunt Rochester. “The Center for Clean Hydrogen, a remarkable partnership between the University of Delaware, Chemours and the National Renewable Energy Laboratory (NREL), will be a hub for the research, development and innovation needed to help us secure that clean energy future.

“As a member of the House Energy subcommittee and the founder and co-chair of the bipartisan Future of Work Caucus, I know that we cannot secure that future without ensuring we are preparing the workforce of the future and creating good-paying jobs,” Blunt Rochester continued. “The Center for Clean Hydrogen will help us do both. I’m proud to join all the partners, including Senators Carper and Coons, to support the Center for Clean Hydrogen so that we can realize a safer, cleaner future for all.” 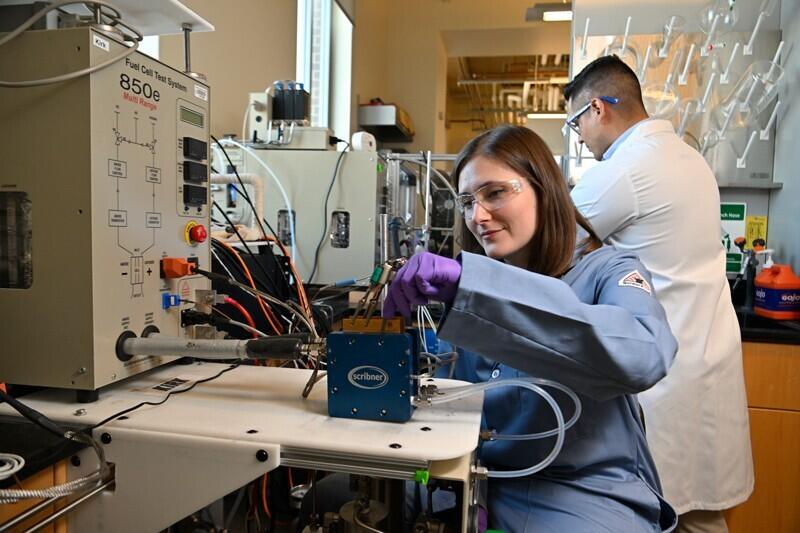 The center also will provide a training ground to equip the highly skilled workforce of the future for this new frontier of engineering, with UD undergraduate and graduate students involved in the work. Doctoral student Stephanie ‘Stevi’ Matz is shown here working on fuel cell technology.

With one of the top-ranked programs in chemical and biomolecular engineering in the United States, UD has deep research expertise in water electrolyzers, hydrogen fuel cells and carbon capture technologies.

Electrolyzers use renewable electricity to split water (H2O) to generate green hydrogen for decarbonizing heavy industries. Fuel cells convert hydrogen’s chemical energy directly into electricity and can be used to power zero-emission transportation, such as heavy-duty long-haul trucks. Meanwhile, carbon-capture technologies can reduce carbon emissions by removing carbon dioxide from point sources, such as smokestacks or ships, and the air.

Additionally, clean hydrogen can help the Department of Defense to reduce its operational carbon footprint. The UD center will also enhance the protection of troops by making critical contributions to military vehicles due to the low thermal and acoustic signatures of fuel cells, Yan said.

“Electrochemical engineering is going to be a new frontier of engineering, and through this new center we can train a lot of students for jobs that will be in high demand,” said Yan.

According to a Hydrogen Economy report, industry estimates anticipate the hydrogen economy could drive 700,000 jobs in the United States by 2030.

“Today’s Center for Clean Hydrogen announcement is just one example of the collaboration between industry, academia and the federal government that makes the First State a world leader in clean energy innovation,” said U.S. Sen. Chris Coons. “As a member of the Senate Appropriations Committee, I was thrilled to secure this funding to support critical research into clean hydrogen technologies that will help us reduce emissions from our manufacturing and transportation sectors and combat climate change. I’m grateful to the University of Delaware and Chemours for their leadership that will create manufacturing jobs right here in Delaware, and I will continue to fight alongside Senator Carper and Representative Blunt Rochester for federal funding to grow these types of partnerships.”

The future belongs to sustainable energy

UD is well positioned to do this work.

A member of both the National Academy of Engineering and the National Academy of Inventors, Yan is an expert in electrochemical engineering for sustainability, with more than two decades of research and discovery in the field. His group’s work with fuel-cell technology ultimately led to a new family of polymers that can be used in fuel cells, green hydrogen generation and carbon capture. One of his most recent projects involves using hydrogen to capture carbon dioxide from the air to help advance more environmentally friendly fuel cells. 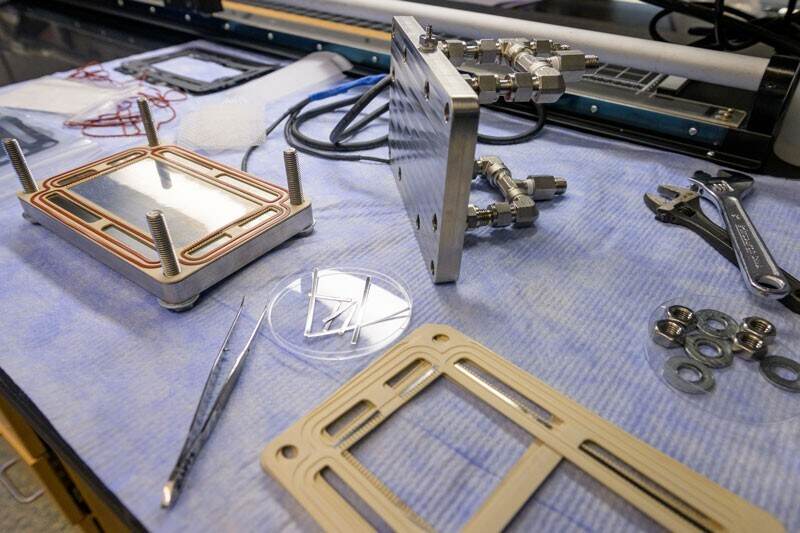 These components go together to make fuel cells that work by converting fuel chemical energy directly into electricity. They can be used in transportation for things like hybrid or zero-emission vehicles.

Other UD faculty with relevant expertise connected to the center include Ajay Prasad, Engineering Alumni Distinguished Professor and chair of mechanical engineering, whose long-standing hydrogen fuel cell bus research through the Center for Fuel Cells and Batteries includes work to eliminate the need for expensive catalysts in fuel cell membranes.

Feng Jiao, Robert K. Grasselli Development Professor of Chemical and Biomolecular Engineering and director of the Center for Catalytic Science and Technology, is exploring inexpensive oxygen electrocatalysts for creating green hydrogen from water, while Joel Rosenthal, professor and chair of chemistry and biochemistry, is developing potential low-cost hydrogen catalysts for electrolyzers and fuel cells. Kun “Kelvin” Fu, mechanical engineering assistant professor and affiliated faculty in the Center for Composite Materials, has interest in materials and manufacturing innovations. Pierre Yao, assistant professor of mechanical engineering, will be developing in situ techniques for understanding electrochemical interfaces found in electrolyzers and fuel cells.

“To reduce the cost of clean hydrogen and hydrogen-related technologies, we need to look at the whole supply chain for the manufacturing of the stacks where the electrochemical reactions occur,” said Yan. “The problems we need to solve are large in scale and complex in nature and therefore close collaborations between academia, industry and the government laboratories are essential.

“We also need contributions from different academic disciplines. The new Center for Clean Hydrogen at UD has all the right ingredients for success, and I am honored to lead it at its inception.”