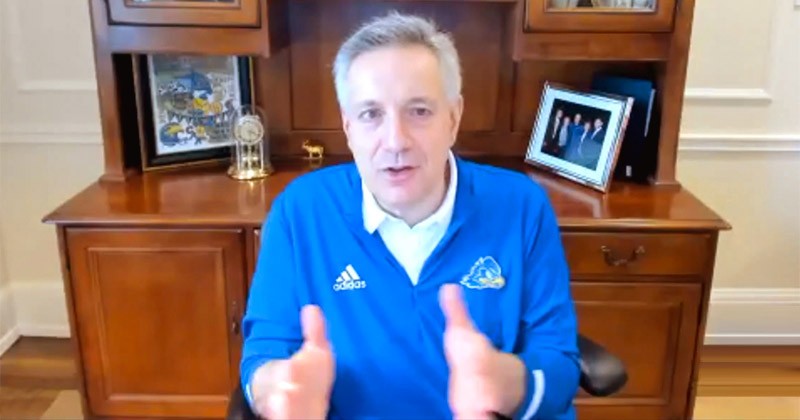 UD President Dennis Assanis addresses more than 1,300 members of the campus community during the General Faculty meeting, held via Zoom and UDLive.

As institutions of higher education across the globe face unprecedented disruption during the coronavirus pandemic, the University of Delaware has the chance to become a “university of the future,” President Dennis Assanis said at the General Faculty meeting on May 11.

Assanis addressed more than 1,300 members of the UD community via a Zoom session streamed by UDLive. His message — delivered in a presentation followed by a question-and-answer session moderated by Provost Robin Morgan — was one of resilience and opportunity during a time of uncertainty and evolution. He assured the audience that the University’s mission, ethos and institutional values will remain steadfast.

“Is innovation still important? Absolutely, it is,” he said. “Is commitment to student success relentless and exactly the same as before? Yes, even more than before…. What has changed is the approach and the tactics to make sure this strategy is realized.”

The challenges are unprecedented. Assanis cited UD’s estimated financial impact at $52 million so far, a number that accounts for the $6 million given to UD in federal CARES Act funding and the $16 million that’s been recouped through mitigation measures. However, it does not account for unquantifiable factors, like the impact of lost fundraising and uncompleted research. Several other unknowns loom large, including the impact that COVID-19 will have on athletics, state appropriations and enrollment.

In navigating these challenges, the University has adhered to three guiding principles: a commitment to positive societal change, a commitment to academic excellence, and — “my number one priority,” Assanis said — a commitment to the health and safety of people in the UD community and beyond. These principles have shaped the University’s COVID-19 response thus far, including the quick transition of more than 6,400 classes to an online format, the communication of essential information through a coronavirus call center and other methods, and the sharing of personal protective equipment and other resources with the wider community. UD scientists have also conducted impactful coronavirus research and developed 3-D printed face shields.

UD — which has launched an internal planning task force and health-advisory group — is working closely with state leaders and public health officials on a plan of action. Assanis is also representing Delaware on a seven-state council of higher education leaders launched by New York Gov. Andrew Cuomo.

Pending the health-and-safety situation, the goal is to begin a phased reactivation of campus activities beginning June 1, with a return to in-person instruction for the fall semester. Multiple contingency measures will continue to be considered, including the possibility of a delayed start to the fall semester of around Oct. 1, which could cause the cancellation of UD’s Winter Session. That decision will likely be made in July, Assanis said. Either way, COVID-19 testing and personal protective equipment would need to be readily available on campus, with spaces designated for isolating positive (or presumed positive) cases. Contact tracing protocols would also need to be in place.

New safety procedures would include increased sanitation of public spaces and, an adjusted course schedule allowing for more than 15 minutes between classes, to avoid crowding. In many cases, the structure or format of individual courses will need to be adjusted to avoid having too many students in one classroom at a time.

“Right now, we know that we will have significant limitations on the number of students we can put in our classrooms safely,” Assanis said. “So that means large classes that were held in auditoriums would need to transition to a hybrid model, with lectures delivered online and possibly recitations in smaller settings. Also, those courses that simply work better in a digital format might continue operating online.”

As for housing, the goal is to still offer the residential experience, albeit modified. In other words: Triples are likely out of the question, Assanis said.

Assanis also highlighted that this disruption will bring along longer-term changes to higher education. For instance, this creates an opportunity to innovate, evolve and support the academic community with the space needed for meaningful collaboration.

With regard to campus physical space, “in many cases, the paradigm has changed,” he said. “We don’t need as many compartmentalized offices and small labs. We need to … make sure there are lots of spaces for students to interact and intermingle with professors. We need to be thinking at the higher level about more open, blue-sky types of environments. That’s going to be critical for our ability to remain relevant in the world and to make the contributions we can.”

Assanis recognized some of the faculty and students who embody this spirit of innovation and perseverance, including Norman J. Wagner, the Unidel Robert L. Pigford Chair in Chemical and Biomolecular Engineering and the recipient of the 2020 Francis Alison Award, the University’s highest faculty honor.

Also recognized were students Bianca Mers and Arnav N. Prasad, winners of the Emalea Pusey Warner and Alexander J. Taylor awards, respectively, which honor an especially high-achieving woman and man from the senior class. Rebecca King was acknowledged as the first UD student to receive both a Boren Award and Critical Language Scholarship, enabling her immersive language study in Russia and Kyrgyzstan. Meanwhile, a Goldwater Scholarship went to Lucas Attia (chemical engineering, Class of 2021), while Ariel Hannum (biomedical engineering, Class of 2020) was recognized as a finalist in the Gates Cambridge scholarship program, which covers the cost of a full-time postgraduate degree at the University of Cambridge.

“Our institution is firing on all cylinders,” Assanis said. “We have amazing momentum.”

Momentum, he added, that will carry the University through this trying period: “We are in this together, all of us. I can assure you: We will persevere.”

Editor’s note: A video of the meeting is available online. President Assanis thanked the members of the University community who have stood together, responding to the pandemic and ensuring academic continuity for UD’s students.