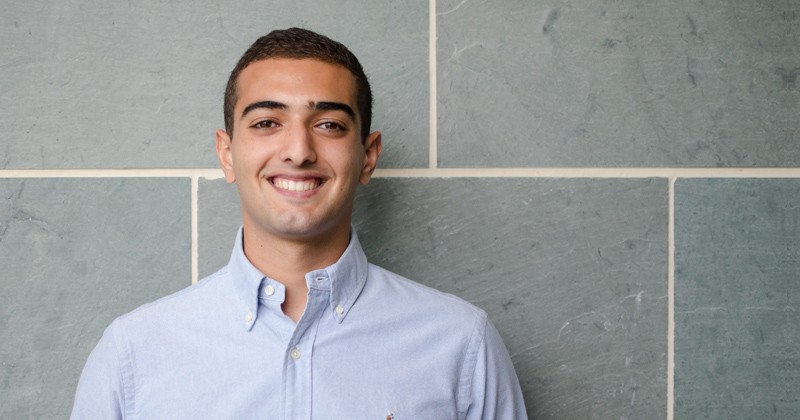 University of Delaware junior Lucas Attia checked his email one day over spring break and was humbled by a message waiting in his inbox — an email notifying him that he had been selected to receive one of the most prestigious scholarships in the natural sciences, engineering and mathematics in the United States: the Goldwater Scholarship.

Attia, an Honors chemical engineering major from Hockessin, Delaware, was recognized for his promise to become a leader in industrial pharmaceutical research someday.

Attia has already demonstrated extraordinary potential in this area as an undergraduate researcher in the laboratory of Assistant Professor Cathy Fromen, where he studies aerosolized nanoparticle drug carriers, tiny particles that could deliver medicine to lung tissue in people afflicted with respiratory diseases.

“The Goldwater Scholarship is all about identifying really exceptional undergraduate researchers, and that’s him to a T,” Fromen said of Attia.

Attia joined Fromen’s lab during the fall of 2017, his first semester at UD. It was Fromen’s first semester at UD, too, and Attia was intrigued by Fromen’s work in drug delivery and pharmaceuticals to treat lung diseases. He was drawn to the opportunity to improve lives and maybe even save them through research.

Like many new lab members, he started by carefully following the steps laid out for him by more experienced graduate students. But it wasn’t long before Attia was ready to do more.

Even as a first-year student, before he had completed foundational chemistry and engineering courses, he would read academic papers and ask questions to advance his knowledge — and the group’s understanding of new problems. “He really has always been very engaged in asking questions when he doesn’t know things, and I think he’s very scientifically curious,” said Fromen.

Within his first year, Attia began working on a project to characterize tiny metal organic framework nanoparticles and found that the tiny particles displayed unexpected fluorescence. There was a background spectrum of light the team hadn’t expected to see.

“Then he kind of dove into why this happens, which has to do with the molecular orientation of the ligands and how electrons are moving around within this confined nanoparticle space,” said Fromen. “Having not taken physical chemistry, quantum physics, or organic chemistry at that point, it was very outside the scope of what you would expect an undergraduate to do.”

Attia was a co-author on a paper about this phenomenon that was published in 2019 in the journal Chemistry of Materials.

Before the pandemic temporarily closed the research lab, Attia was synthesizing more tiny particles and then studying how they would behave while carrying medicine in a model human lung.

This is the kind of experience he came to UD’s world-renowned chemical engineering program for. When he graduates in 2021, Attia will be well equipped for success, and he plans to pursue a doctoral degree.

“The chemical engineering curriculum really instills in you a strong work ethic, which is something I’m going to carry with me forever,” said Attia. “Even if I don’t use all of the information I learned, I’m always going to use that work ethic.”

Even in the coronavirus (COVID-19) pandemic, he is thinking of new ways to succeed. With lab operations shut down, Attia is tapping the skills he has learned as a computer science minor, finding new ways to use software in his research.

Outside the lab, Attia is involved with UD’s Engineers Without Borders chapter.