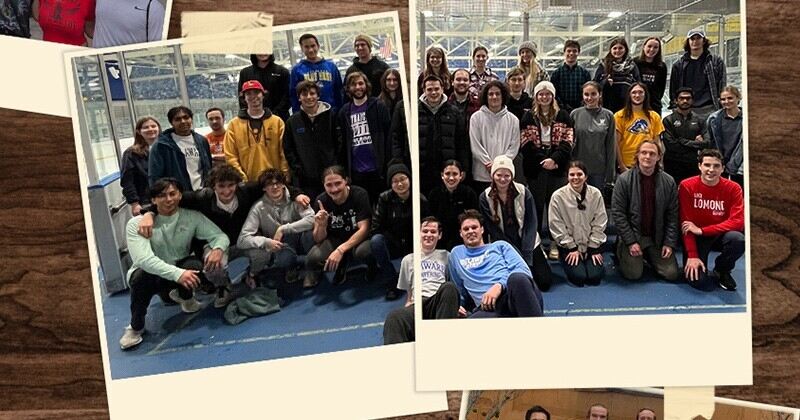 On a chilly Wednesday evening just before the Thanksgiving break, mechanical and chemical engineering students at the University of Delaware convened at the Fred Rust Ice Arena to play broomball. The event brought together 40 students who squared off on the ice with brooms for a bit of friendly competition and to let off some steam before the end of the fall semester.

Hosting this and a variety of other activities throughout the year is UD’s chapter of the American Institute of Chemical Engineers (AIChE). Not only is the student chapter of this professional organization a place for socializing, networking and community engagement, UD AIChE also promotes a sense of community for students in this top-ranked chemical engineering undergraduate program.

UD AIChE’s goal is to provide students in the College of Engineering’s Department of Chemical and Biomolecular Engineering with networking, mentorship, professional development and outreach opportunities throughout their undergraduate careers.

Each month, nearly 80 chemical engineering students get together during UD AIChE’s general body meetings, which feature talks from industry representatives that this fall have included Merck, Evonik, ExxonMobil and Ingredion. The group also hosts professional development and networking events, group study halls, faculty breakfasts, graduate student panels, and local industry tours, which have grown in popularity this year now that pandemic restrictions have been lifted. 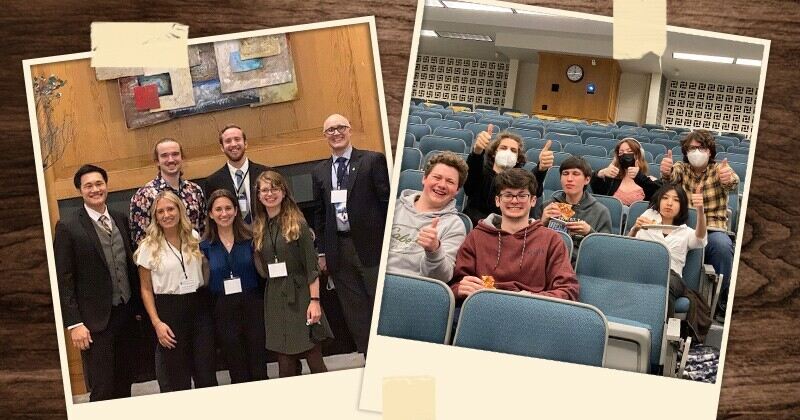 UD AIChE is entirely student-led, with two presidents, seniors Lydia Kowalski and Katie Graboski, who oversee the inward and outward-facing aspects of the group’s activities respectively. Junior John Dehais is the UD AIChE treasurer and junior Rachel Dick is the group’s secretary.

One advantage of the group’s committee structure, explained Kowalski, is that students can get involved with planning and coordinating activities early in their undergraduate careers, with the opportunity to dive into the group’s activities in public relations, community outreach, recruitment, professional development or academics as soon as they get started.

Along with its professional development goals, AIChE is also a “social space for chemical engineers to come together,” Graboski said. This fall, the group has hosted nearly one social activity each week, including an October trip to Milburn Orchards, a Halloween movie night and costume contest and a first year student welcome night.

Beyond its goals of being a professional and social space, another key thing that UD AIChE does, said Joshua Enszer, associate professor and the UD AIChE faculty adviser, is help build a sense of community in the department. 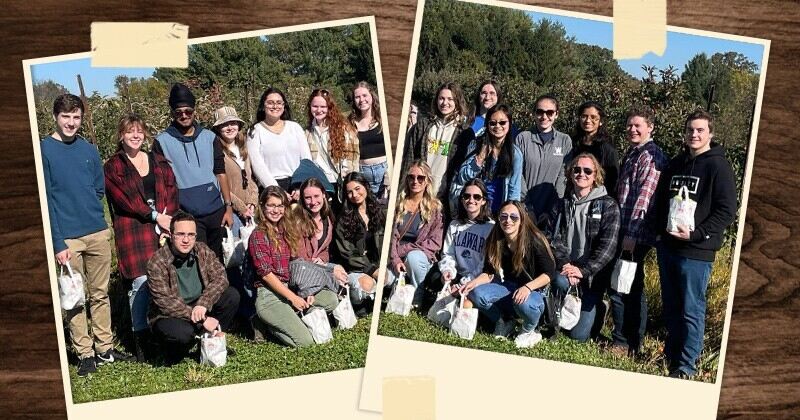 During the fall of 2022, UD AIChE hosted nearly one social activity each week, including an October trip to Milburn Orchards (pictured here), a Halloween movie night and costume contest and a first year student welcome night.

“AIChE is a major tool we have for helping students find one another and to start developing that chemical engineering identity,” said Enszer, adding that it helps achieve objectives such as retention, success and persistence. “The community the students have built is one of the most attractive things about our program, and with AIChE, not only do you get to interact with your peers outside the classroom, you also get to see what other years are doing and interact with them.”

This community is part of what attracted junior Tiffany Jung to UD in the first place. “It’s a very interconnected major, and AIChE, with all the events they run, helps you become more connected,” said Jung, who is now the chair of the recruitment committee and helps coordinate department tours for UD’s Blue and Gold days. She added that finding student volunteers to lead the tours is usually an easy task because “people generally love talking about the department and they love the culture the department has.”

Another way that UD AIChE helps build community is through the group’s mentorship program. Previously organized by Recruiting, Engaging, Advancing Chemical Engineers (REACH), these activities were incorporated into AIChE in 2020. Now, UD AIChE organizes a mentorship program that pairs first year students with upperclassmen so students can both meet their peers while receiving support and encouragement throughout the year. Nearly a quarter of chemical engineering undergraduates are involved in the program, either as mentors or mentees. 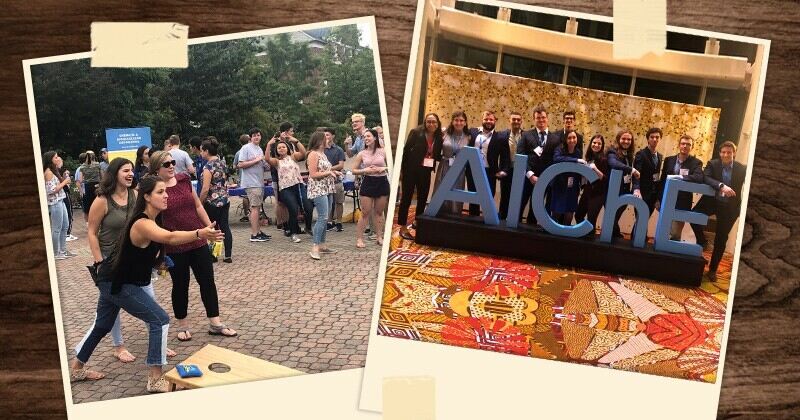 “Mentorship helps guide students and reduces impostor syndrome, showing them that people who have similar backgrounds have succeeded,” said senior Rebecca Beswick, the academic committee chair of AIChE. “I have had countless mentors who have shaped my thoughts of chemical engineering and have set me up for success, and I believe mentorship is one of the most critical parts of ensuring as many students are as happy and successful as possible.”

Kowalski added, “AIChE’s community and mentorship program really helps students learn about possible career paths in chemical engineering. From interacting with upperclassmen and industry professionals, AIChE covers a wide range of opportunities after graduation, whether it be a traditional industry role, graduate school, and even consulting or law school. Many students have found AIChE’s community really helpful in finding what path is right for them.”

UD AIChE members can look forward to recurring 2023 spring semester events including t-shirt tie-dyeing, a Super Smash Bros. competition, a volleyball tournament and the possibility of a soccer tournament this spring.

Beswick, who was recently recognized for her efforts launching the mentorship program with the Donald F. and Mildred Topp Othmer Scholarship Award at the AIChE annual meeting, said that one of the things she likes the most about the group is connecting with students in other years of the chemical engineering program as well as hearing and sharing advice.

“AIChE allows chemical engineering undergraduates to make connections with both their peers and professionals,” she said. “Creating this network at any point in your undergraduate career gives you a huge step up on your future opportunities.”