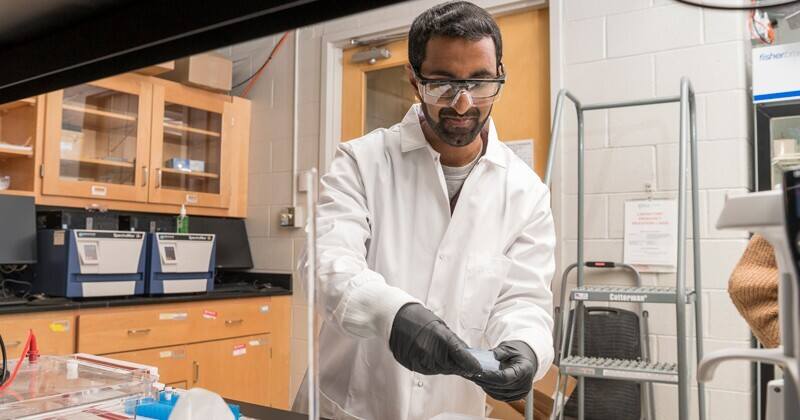 The University of Delaware’s Aditya Kunjapur, an assistant professor in the College of Engineering, has received a 2022 National Institutes of Health Director’s New Innovator Award. This award recognizes early career researchers who propose innovative projects to address high-risk, high-impact questions in biomedical and behavioral areas of research.

Kunjapur and members of his lab work on fundamental and applied research to expand the types of metabolites (such as sugars, vitamins, and antioxidants) and proteins that bacteria can synthesize. The impacts of their synthetic biology research can be felt across a wide range of fields, from the ability to produce chemicals and materials more sustainably to designing new types of diagnostics, therapeutics and vaccines.

A member of UD’s Department of Chemical and Biomolecular Engineering, Kunjapur is one of 72 of this year’s New Innovator Award winners, a prize that was established in 2007 as part of the NIH’s High-Risk, High Reward program.

“The science advanced by these researchers is poised to blaze new paths of discovery in human health,” said Lawrence A. Tabak, who is acting director of NIH. “This unique cohort of scientists will transform what is known in the biological and behavioral world.”

With $2.4 million in funding over the next five years, Kunjapur’s New Innovator Award will focus on designing low-cost, shelf-stable vaccines that could be delivered orally by “teaching” bacteria to produce an amino acid that elicits an immune response. Kunjapur will collaborate with CBE Assistant Professor Catherine Fromen, whose lab and expertise will play a key role in designing and executing immunization studies. 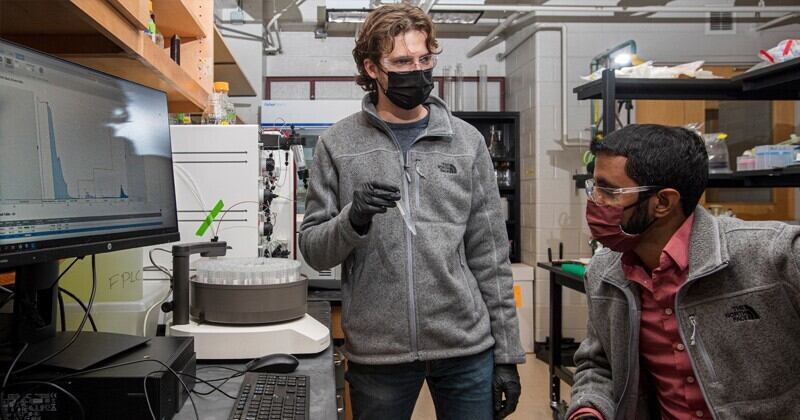 Graduate student Neil Butler (left) works in the lab of assistant professor Aditya Kunjapur in the Department of Chemical and Biomolecular Engineering. Kunjapur will continue working on designing low-cost, shelf-stable vaccines that can be delivered orally thanks to the research efforts by Butler on protein-mediated immune responses.

Kunjapur said he was very honored by this recognition, especially as a researcher who started his journey in more traditional areas of chemical engineering before transitioning to non-biomedical research applications of biotechnology.

“During my training experiences I realized that microbial engineering could have immense value for medicine — not just using microbes to produce therapeutics in a vat, but to design living organisms that can interact with patients to help treat or prevent disease,” Kunjapur said. “When my students and I originally came up with some of these ideas, I worried that the ideas might be too risky or that I might be an impostor. Receiving the NIH Director’s New Innovator Award provides reassurance that this is worthwhile, that we have the right capabilities and that it is never too late to get out of one’s scientific comfort zone.”

The long-term goal of this research will be to pursue preclinical testing and commercialization of vaccine candidates, the latter as part of Kunjapur’s start-up Nitro Biosciences. Kunjapur was also recognized for this work in 2021, when he received the Langer Prize for Innovation and Entrepreneurial Excellence to design bacterial strains that can elicit immune responses using unnatural protein chemistries.

Kunjapur credits the support of his mentors, collaborators, students, and peer reviewers on helping him construct a higher risk research program that made this NIH Innovator Award possible.

“My initial approach to proposal writing was to play it safe, to write about tackling a research problem that we knew we could deliver upon in a few years. But after more interactions with mentors and students, we shifted away from this mindset,” Kunjapur said. “The academic research environment provides a unique space to test transformative ideas. People essentially told me ‘We aren’t sure if you’ll be able to do this, but if you can then it will make the world a better place. So please try.’ Conversations like that were really encouraging.”

Kunjapur has been at UD since 2019, after earning his doctorate in chemical engineering from MIT in 2015 and completing a postdoc at Harvard, and has long been interested in harnessing the power of synthetic biology. “There was previously a tendency to think you had to work with mammalian cells for your work to be biomedically relevant, but there are numerous biomedical discoveries and inventions that come from bacteria, like CRISPR, or are bacteria, like engineered probiotics” said Kunjapur. “This award is a reminder that bacterial engineering has a role to play in biomedical research.”

Along with this New Innovator Award, this year Kunjapur was recognized by the Office of Naval Research Young Investigator Program and the New Innovator in Food Agriculture Research Award and in 2020 was part of the American Institute of Chemical Engineers (AIChE) “35 Under 35” list. His research group is part of UD’s Chemistry-Biology Interface Program and the Center for Plastics Innovation and is also affiliated with the Delaware Biotechnology Institute and the Delaware Environmental Institute.

“Professor Kunjapur’s incredible creativity and courage to think outside of the box, coupled with his deeply collaborative mindset, have sparked multiple new research avenues at University of Delaware,” said Millicent Sullivan, who is the Alvin B. and Julie O. Stiles Professor and Chair of the Department of Chemical and Biomolecular Engineering. “The work he will undertake as a result of this award is a wonderful example of the ways that Professor Kunjapur is applying his unique microbial engineering skills to address human health challenges in a fundamentally new way, paving the way for new vaccination strategies in the long-term while also significantly impacting the research and educational environment at Delaware.”