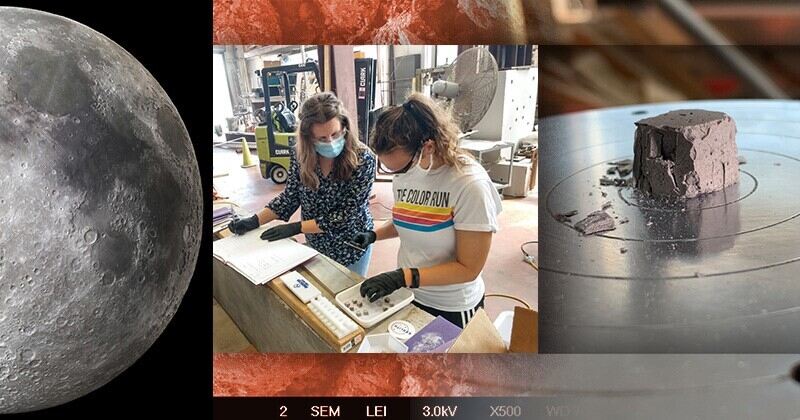 University of Delaware researchers mixed simulated lunar and Martian soils with a high-pH solution to create geopolymer bricks, then crushed the bricks to see how strong they were. The experiments are helping them work on ways for astronauts to create building materials in space.

So, where do you turn for construction materials when they are too big to fit in your carry-on and there’s no Home Depot in outer space?

“If we’re going to live and work on another planet like Mars or the moon, we need to make concrete. But we can’t take bags of concrete with us — we need to use local resources,” said Norman Wagner, Unidel Robert L. Pigford Chair of Chemical and Biomolecular Engineering at the University of Delaware.

Researchers are exploring ways to use clay-like topsoil materials from the moon or Mars as the basis for extraterrestrial cement. To succeed will require a binder to glue the extraterrestrial starting materials together through chemistry. One requirement for this out-of-this-world construction material is that it must be durable enough for the vertical launch pads needed to protect man-made rockets from swirling rocks, dust and other debris during liftoff or landing. Most conventional construction materials, such as ordinary cement, are not suitable under space conditions.

UD’s Wagner and colleagues are working on this problem and successfully converted simulated lunar and Martian soils into geopolymer cement, which is considered a good substitute for conventional cement. The research team also created a framework to compare different types of geopolymer cements and their characteristics and reported the results in Advances in Space Research. The work was highlighted recently in Advances in Engineering.

Geopolymers are inorganic polymers formed from aluminosilicate minerals found in common clays everywhere from Newark, Delaware’s White Clay Creek to Africa. When mixed with a solvent that has a high pH, such as sodium silicate, the clay can be dissolved, freeing the aluminum and silicon inside to react with other materials and form new structures — like cement.

Soils on the moon and Mars contain common clays, too.

This made Maria Katzarova, a former associate scientist and member of Wagner’s lab at UD, wonder if it was possible to activate simulated moon and Martian soils to become concrete-like building materials using geopolymer chemistry. She proposed the idea to NASA and obtained funding via the Delaware Space Grant Consortium to try with the help and expertise of then-UD doctoral student Jennifer Mills, who studied terrestrial geopolymers for her doctoral dissertation. The researchers systematically prepared geopolymer binders from a variety of known simulated soils in the same exact way and compared the materials’ performance, which hadn’t been done before.

“This is not a trivial thing. You can’t just say give me any old clay, and I’ll make it work. There are metrics to it, chemistry that you have to worry about,” Wagner said. 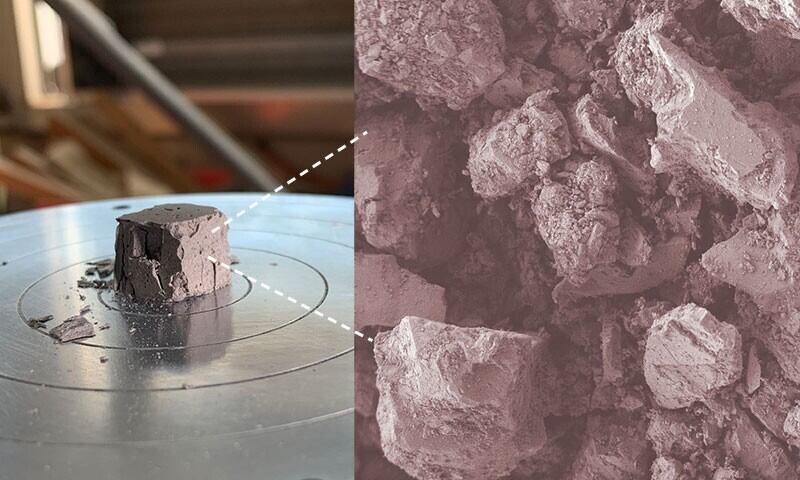 A crushed geopolymer cube made from simulated lunar topsoil, inset shows magnification of lunar topsoil particles which have been activated and reacted to form the geopolymer binder.

The researchers mixed various simulated soils with sodium silicate then cast the geopolymer mixture into ice-cube-like molds and waited for the reaction to occur. After seven days, they measured each cube’s size and weight, then crushed it to understand how the material behaves under load. Specifically, they wanted to know if slight differences in chemistry between simulated soils affected the material’s strength.

“When a rocket takes off there’s a lot of weight pushing down on the landing pad and the concrete needs to hold, so the material’s compressive strength becomes an important metric,” Wagner said. “At least on Earth, we were able to make materials in little cubes that had the compressive strength necessary to do the job.”

The researchers also calculated how much terrestrial material astronauts would need to take with them to build a landing pad on the surface of the moon or Mars. Turns out, the estimated amount is well within the payload range of a rocket, anywhere from hundreds to thousands of kilograms.

The research team also subjected the samples to different environments present in space, including vacuum and low and high temperatures. What they found was informative.

Under vacuum, some of the material samples did form cement, while others were only partially successful. However, overall, the geopolymer cement’s compressive strength decreased under vacuum, compared to geopolymer cubes cured at room temperature and pressure. This raises new considerations depending on the material’s purpose.

“There’s going to be a tradeoff between whether we need to cast these materials in a pressurized environment to ensure the reaction forms the strongest material or whether can we get away with forming them under vacuum, the normal environment on the moon or Mars, and achieve something that’s good enough,” said Mills, who earned her doctoral degree in chemical engineering at UD in May 2022 and now works at Dow Chemical Company.

Meanwhile, under low temperatures of about -80 degrees Celsius, the geopolymer materials didn’t react at all.

“This tells us that we might need to use some sort of accelerant to achieve the strength we see at room temperature,” Mills said. “Maybe the geopolymer needs to be heated, or maybe we need to add something else to the mix to kickstart the reaction for certain applications or environments.”

At high temperatures, about 600 degrees Celsius, the researchers found that every moon-like sample got stronger. This was not surprising, Mills said, given how the kinetics were hindered at low temperatures. The research team also saw changes in the physical nature of the geopolymer cement under heat.

“The geopolymer bricks became much more brittle when we heated them up, shattering as opposed to becoming compressed or breaking in two,” Mills said. “That could be important if the material is going to be subjected to any type of external pressure.”

Based on their results, the researchers said that chemical composition and particle size may play an important role in material strength. For example, smaller particles increase the available surface area, making them easier to react and potentially leading to greater overall material strength. Another possible factor: the amount of aluminosilicate content in the starting materials, which can be tricky to estimate when added solutions may also contain small concentrations of these materials and contribute to material performance.

What does it all mean?

Well, Amazon doesn’t offer two-day delivery to space, so designing the right formulation of starting materials to take matters. Understanding what affects material strength is important, too, since astronauts will be sourcing our topsoil materials from different places on planets — and maybe even different planets altogether.

These results also can be used to make geopolymer cements on Earth that are better for the environment and can be sourced from a wider variety of local materials. Geopolymer cements require less water than is needed to make traditional cement, too, because the water itself is not consumed in the reaction. Instead, the water can be recovered and reused, a plus in water-limited environments from arid earthly landscapes to outer space.

Today, two of Wagner’s current graduate students are exploring ways to use geopolymer cements to 3D-print houses and to activate geopolymer materials using microwave technology. The work is a collaborative project, funded by the National Science Foundation, with researchers at Northeastern and Georgetown universities. Similar to the microwaves you use to reheat your morning coffee, microwave heating can accelerate geopolymer curing and may one day provide a way for terrestrial builders — or astronauts — to cure geopolymer concrete in a targeted way.