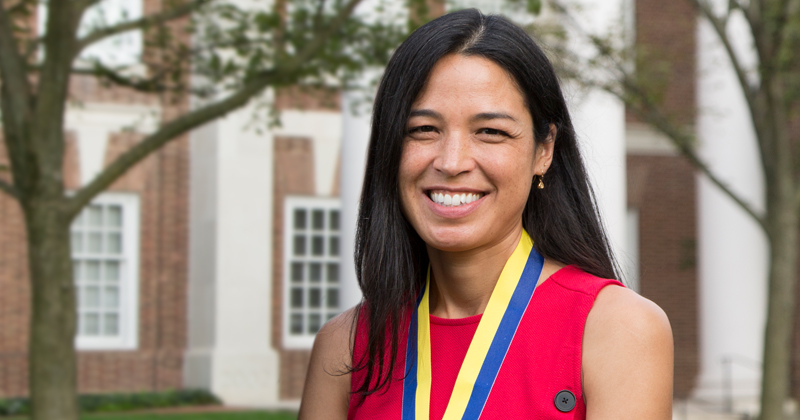 Sullivan joined the College of Engineering faculty in 2006, and holds a joint professorship in the Department of Biomedical Engineering. She received her undergraduate degree in chemical engineering from Princeton University, and her doctorate in chemical engineering from Carnegie Mellon University. She is an expert in drug and gene delivery, biomaterials and regenerative medicine, and served as associate chair of the department from 2018 to 2021.

Sullivan, who also is the director of the Biopharmaceutical Sciences MS Program at UD and director of a study abroad program in Melbourne, said she’s been inspired by the new people and new ideas she’s exposed to year after year at the University.

“The Department has a deep sense of collaboration that I really appreciate, along with a group of incredibly creative and energized people who have different ideas, diverse perspectives and a willingness to learn from each other,” she said. “That willingness to problem-solve amidst people who think about things differently brings out the most innovative ideas and the most likely potential solutions, and it produces a research and educational environment that I love.”

She said she looks forward to the growth of the field and the Department, as the fundamentals of chemical engineering have broad potential for problem-solving applications far beyond the chemical industry, from synthetic biology to new materials to finding better ways to collect and harvest energy.

“The fundamentals that are at the core of chemical engineering can be applied to all of these different application spaces, highlighting the versatility of the basic tool set,” she said. “I’m really excited about the ways that we can grow our department, by bringing in new faculty, recruiting new students and ultimately positioning ourselves to tackle some of these really big problems.”

She said she hopes to expand interdisciplinary collaborations with experts outside of the department and to grow both graduate and undergraduate education programs in ways that enable students and future engineers to solve open-ended problems that may not have clear solutions.

Sullivan succeeds Eric Furst, who joined the UD faculty in 2001 and has served as department chair since 2017.

In addition to her accomplishments at UD, Sullivan also is a Fulbright Future Scholar at the University of Melbourne, an American Institute for Medical and Biological Engineering Fellow and has earned numerous accolades, including a National Science Foundation CAREER Award (in 2008).