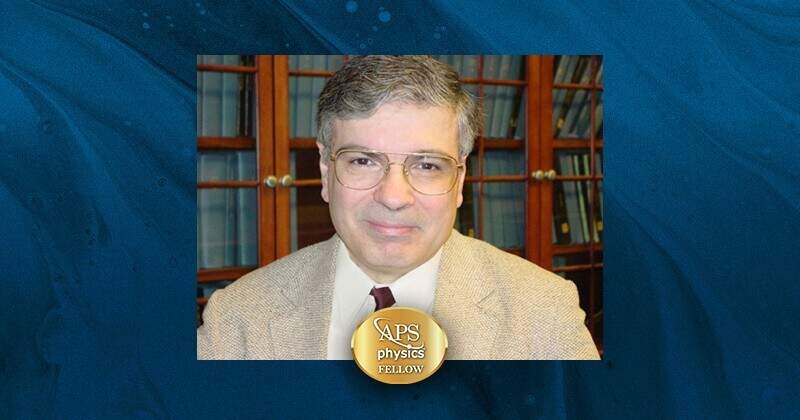 Antony Beris, Arthur B. Metzner Professor in the University of Delaware’s Department of Chemical and Biomolecular Engineering, has been named an American Physical Society Fellow.

Like many of the most gifted engineers and computer scientists, Professor Antony Beris is not in this line of work for the accolades. He’s in it to make the world a better place.

His humble nature has kept the Arthur B. Metzner Professor in the University of Delaware’s Department of Chemical and Biomolecular Engineering focused on advancements in his field, where Beris has advanced scientific understanding of the theories of fluid mechanics and thermodynamics.

“My recent award is not so unique with so many faculty, students and staff doing wonderful things,” said Beris, a chemical engineer. “There are definitely very good collaborators that I’ve had over the years that helped me with this kind of work.”

Beris recently received a long-deserved recognition as he was named an American Physical Society (APS) Fellow in 2021 for “groundbreaking contributions to the theory and computation of viscoelastic flows, specifically for an innovative nonequilibrium thermodynamics-based formalism for complex fluids, and for pioneering and insightful computational studies of viscoelastic instabilities and turbulent drag reduction.” Each year, the title of Fellow is awarded to fewer than 1% of society members. Beris, whose nomination came from the APS Division of Fluid Dynamics, joins more than two dozen other UD faculty members, past and present, to earn the honor.

“It’s wonderful to see his contributions recognized by his peers in the physical sciences and engineering communities,” said Eric Furst, chair of the Department of Chemical and Biomolecular Engineering. “Professor Beris’ seminal contributions to nonequilibrium thermodynamics, including his monograph on the subject with Brian Edwards, led to new approaches to model the flow phenomena of materials with complex internal microstructures. Most recently, he and his students, along with Professor Norman Wagner, applied this approach to make significant advances in the understanding of blood rheology, but his work impacts a broad span of applications across numerous technologies.”

Beris has focused most of his career on the study of materials and their flow, particularly substances that are more complex than water, such as human blood or liquid crystals used in LCDs for computer monitors and television screens, for example. His work has helped inform the biomedical world on how blood really flows within the human body, helped troubleshoot transportation issues using additives in oil pipelines, pinpointed the fluid behaviors of plastic polymers and co-wrote (with Brian J. Edwards) a book on the properties of nonequilibrium thermodynamics of fluids.

He works primarily in theories, modeling and simulations, working closely with other colleagues on experimentation and validity.

Edwards, now professor and associate head at the Department of Chemical and Biomolecular Engineering at the University of Tennessee, first met Beris in the summer of 1986 when Beris was still a new face at UD’s College of Engineering. Edwards had just finished his undergraduate studies and was looking for an innovative adviser. To Edwards, Beris embodied the future of the field.

“He was at the forefront of that movement,” Edwards said of Beris. Together, they developed a new standard for liquid crystalline dynamics, which allowed scientists to make better calculations that didn’t just assume the materials worked the same as regular old H2O.

Three years after Edwards graduated in 1991, Oxford University press published their co-authored book on the new technique. Thirty years later, Beris and Edwards are teaming up again to produce an updated version of their life’s work.

“If I hadn’t worked for him, none of that would have happened,” Edwards said. “It was an outgrowth for both of us.”

The two researchers’ work has been intertwined ever since, but their relationship surpassed the classroom and laboratory, Edwards said.

“We got into it totally naive about everything, and had to work through everything together — and the only sounding board we had was each other,” Edwards said. “So we’d go to dinner almost every night at Wendy’s or wherever and talk about the theory and then go back to work on it and write papers. It was a very interactive experience.”

For Jesse Brown, an electromechanical design engineer at UD’s Center for Composite Materials, Beris was a “force of intelligence” who helped shape his successful future starting at a young age.

“He gave me books to read and I just gobbled them up,” Brown said, recalling when they first met through family over 30 years ago. “Honestly, it changed my life. I just started thinking about physics and the world and how it moved and reacted and its energy.”

Beris was like a father figure to Brown, who was inspired to pursue a career in science and engineering thanks to that fostered love of physics.

“He’s one of those people who’s quiet, loves doing his work and research, loves teaching and loves to give that love of physics to everyone else,” Brown said. “He’s just had a huge impact on so many different people.”

Beris, who also holds a partial joint appointment in the Department of Biomedical Engineering, joined the UD faculty in 1985 after receiving his doctorate in chemical engineering from the Massachusetts Institute of Technology. He received his undergraduate degree from the National Technical University in Athens, Greece. Since then, he’s published over 150 peer-reviewed scientific papers and has served in an editorial capacity for four academic journals.