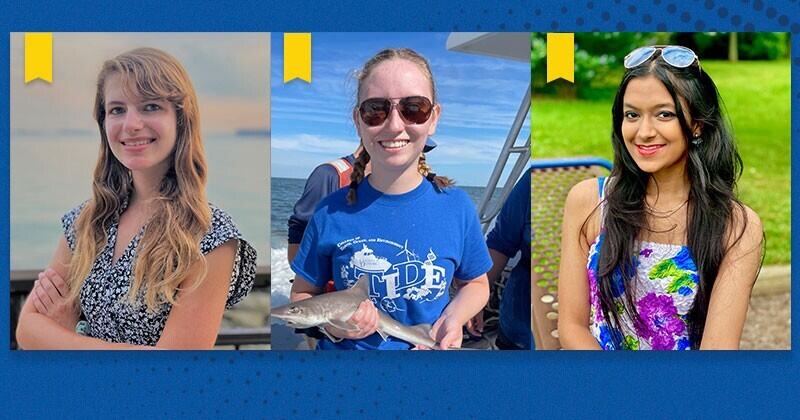 University of Delaware undergraduates Rebecca Beswick, Renea Briner and Ishika Govil have been selected as recipients of the 2022 Goldwater Scholarship, one of the most prestigious scholarships in the natural sciences, engineering and mathematics in the United States.

They are among only 417 Goldwater Scholars who were selected from 1,242 nominees nationally this year.

“I tell all students who apply that to even be considered for the Goldwater Scholarship is an honor,” said Lauren Barsky, associate director of UD’s Undergraduate Research Program. “To win the scholarship, you have to be amongst the very best of the best.”

Eligible students must have a grade point average of at least 3.8, substantial research experience and plan to pursue a doctoral-level research career in academia, industry or government. The scholarship honors U.S. Sen. Barry Goldwater and was designed to foster and encourage outstanding students to pursue research careers in their fields.

Kristin Bennighoff, senior associate director of the UD Honors College, said that the college is so proud that Beswick, Briner and Govil were named Goldwater Scholars.

“Having three women in STEM win the Goldwater Scholarship is an important accomplishment for UD, the Honors College and the Office of Undergraduate Research,” said Benninghoff. “These three amazing women are a testament to UD’s strength in research and the commitment of faculty to provide exceptional experiences and support to undergraduates.”

Goldwater Scholars receive one- or two-year scholarships that cover the cost of tuition, fees, books and room and board up to $7,500 per year. Only 19 institutions across the nation had more than three Goldwater Scholars this year and the eight Ivy League institutions averaged 3.75 scholars per school, which showcases the impressive caliber of undergraduate students who attend the University of Delaware.

“Rebecca, Renea and Ishika are all thriving in their current research fields, have very promising research trajectories and will go on to do fantastic things,” Barsky said. “We at the University are thrilled with their accomplishments so far and are delighted that they are getting the external recognition that they deserve.”

Only 64 students majoring in engineering, including the College of Engineering’s Beswick and Govil, earned the 2022-2023 academic year scholarship. 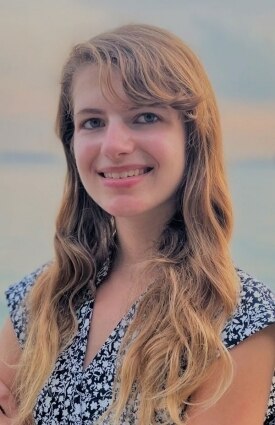 Rebecca Beswick is a junior studying chemical engineering who said it’s almost as if she was destined to become a chemical engineer: Her father is a chemist, and her mother studied as an industrial engineer. By the time she was taking the advanced placement chemistry class in her central New Jersey high school, she found her engineering interests were really in the energy sector and the challenges of transitioning to renewable energy.

“I’m lucky in that I knew what I wanted to go into, this energy storage field,” the 20-year-old said from Singapore, where she was studying abroad in spring 2022. Beswick said she sees an opportunity for improvements to energy infrastructure that could lead to cheaper and more efficient energy sources that are also better for people and the planet.

One of her faculty mentors, Prof. Yushan Yan with the Department of Chemical and Biomolecular Engineering, said Beswick is among the best undergraduate researchers he’s worked with so far.

“She thinks very logically, is very independent and her maturity is way beyond her age,” Yan said. “It has been fun, and a privilege to have worked with her.”

Since she came to UD, Beswick has published three papers and secured an internship two summers in a row at the National Renewable Energy Laboratory in Golden, Colorado. She also serves as vice president for UD’s Engineers Without Borders student-run program. She’s hoped to become a Goldwater Scholar for quite some time, she said.

“It is the elite research scholarship for undergraduate students,” she said. “It’s recognition for the work that I’ve put in, and it is an honor.”

Her goal after graduation is to pursue her doctoral degree and a career focusing on electrochemical research at a national laboratory.

“Maybe I have too much of a bright outlook, but I think that the world must change from the energy system that we have now. It’s going to change,” she said. “If I can play a part in getting the system to work … I think I can make a big impact in the way that the world and the country is run.” 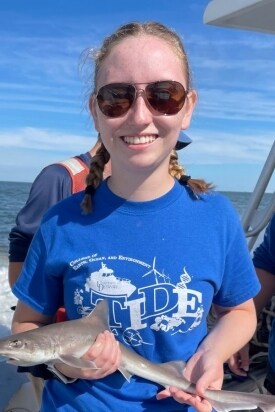 Renea Briner is a junior Honors student with a double major in marine science and psychology with a minor in Spanish.

While she acknowledges the disparate nature of her research interests, Briner wanted to study all of those subjects and didn’t want to miss out on pursuing them just because they might not fit together in a traditional sense.

“I enjoy learning psychology and I’m interested in marine animal behavior so that’s the connection I try to tell people when they ask,” said Briner. “With Spanish, I really enjoy the language and maybe someday I’ll get to do marine fieldwork in a Spanish speaking country.”

Briner hopes to pursue a career in the marine science field and has recently discovered an interest in using underwater acoustics to study animal behavior. She participated in a research experience for undergraduates (REU) at the University of Louisiana at Lafayette this past summer and said it was an eye-opening experience and the main focus of her Goldwater Scholarship application.

Through her work, Briner researched sperm whale population dynamics in the Gulf of Mexico. She spent time analyzing hydrophone — an underwater device that detects and records ocean sounds from all directions — recordings to determine if the number of sperm whales and the sex of the sperm whales in the area changed over a two-year time period.

Sperm whales have unique vocalizations. They produce a click that bounces back and forth in their head through their spermaceti organ and parts of that go into the water as pulses. By measuring the time between the pulses, Briner could determine the size of the organ which is correlated to the total size of the whale and — since males are larger than females — allowed her to determine whether they were male or female.

“Just from this snippet of sound I could tell you, ‘This whale is 8 meters long so it’s a female whereas this one is 13 meters long so it’s a male,’” said Briner. “It was pretty eye-opening. I had dabbled in research with other things and I liked them, but I didn’t necessarily love them. I absolutely loved my acoustic work and it definitely shaped my trajectory in research.” 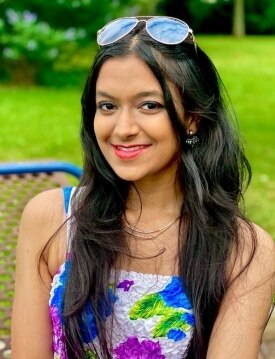 Ishika Govil is a junior double majoring in chemical engineering and computer science. The Virginia resident said she fell in love with chemistry and the creative side of science and education as a teaching assistant during her time at Thomas Jefferson High School for Science and Technology.

Combining that with her interest in mathematics, Govil said she’s fascinated by how computational research can accelerate experimental research, eliminating the time and resources needed to go through typical trial-and-error processes.

Govil is now using that interdisciplinary approach in synthetic biology applications as she works in Aditya Kunjapur’s lab at UD.

“There’s a lot of creativity that goes along with synthetic biology. It’s basically a limitless realm of combining different genes to create an organism with optimized biological systems to solve specific problems,” the 21-year-old said. “I’ve found that computation allows me to sort of play a role that might not be possible for a traditional synthetic biologist.”

Kunjapur, Govil’s mentor and an assistant professor in the Department of Chemical and Biomolecular Engineering, said Govil’s contributions to research work in his lab — both at the bench and computationally — has generated important insights and hypotheses through modeling protein structures.

“Given her computer science dual degree, she came to our lab more advanced in coding than any of our lab members and essentially taught herself about the state-of-the-art in computational protein design and how it could be useful to our lab,” said Kunjapur. “Even more remarkable is how Ishika manages to balance her full plate of activities, as she is not only double majoring in two challenging fields but also a skilled and committed dancer. We are extremely fortunate to have her in our research group and are excited to follow her budding career in the years ahead.”

Govil also is an active member of Delaware Kamaal, UD’s official Indian fusion dance team and is a Gold Award Girl Scout, the culmination of her efforts since starting as a Daisy scout in kindergarten.

“I learned a lot about empowering women over my Girl Scouting journey, whether it be through serving on a Women in STEM panel to inspire younger troops, or selecting women for leadership positions in my Gold Award project,” Govil said. “Seeing three UD women in STEM fields earn the Goldwater Scholarship definitely makes the Girl Scout in me proud!”

In addition, Govil is part of the American Institute for Chemical Engineers (AIChE) UD Chapter and its academic committee, serves as treasurer for AIChE’s Chem-E-Car Competition and is in the process of publishing an academic paper. She’s also a McNair Scholar and the recipient of the Anne Maureen Whitney Barrow Memorial Scholarship from the Society of Women Engineers and the Telkes Scholarship, making her a UD Distinguished Scholar.

This summer, Govil will participate in the Rosetta Commons Research Experience for Undergraduates at Johns Hopkins. She plans to pursue a doctoral degree, likely in chemical engineering with a focus on computational synthetic biology, she said. After that, she hopes to pursue a research-based career in industry or academia.

“It means a lot for my research to be recognized and being named a Goldwater Scholar also propels my decision to attend grad school,” Govil said. “It’s a really exciting validation of the work that I’ve been doing here at UD and even back in high school.”