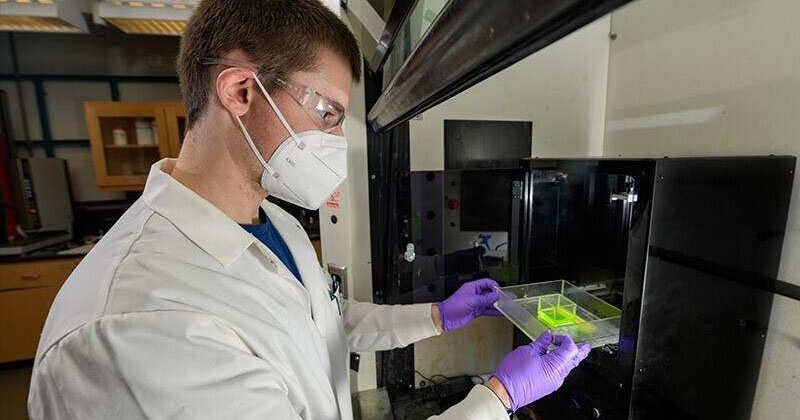 Robert O’Dea is a chemical engineering doctoral student working in the lab of Professor Thomas Epps and co-author on a new paper which looks at methods of repurposing lignin, the hardest-to-recycle part of trees, grasses and other biomass.

It’s no secret that we need more sustainable materials if we hope to help the planet. Bio-derived materials are one potential option, but they must be economical if anyone is going to use them.

For instance, a better bio-based milk jug would be great. However, if the milk sells for $20 per gallon because the cost of the jug increases from $1 to $17, no one will buy it. 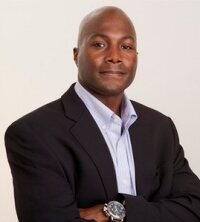 Led by Professor Thomas H. Epps, III, a team of University of Delaware researchers and collaborators from CanmetENERGY are keeping just this type of economics in mind as they look for ways to upcycle biomass into new products. Take lignin, for example. Lignin is a component of plants and trees that provides strength and stiffness to help the flora stand up to what Mother Nature throws its way.

In the pulp and paper industry, however, lignin is a waste left over from making paper products. This type of lignin, known as technical lignin, is considered the dirtiest of the dirty, something that isn’t usable — except maybe to burn for heat or to add to tires as filler.

The UD researchers say this widely available resource — about 100 million tons of technical lignin waste is generated annually in pulp and paper mills around the world — can be much more valuable.

The team has demonstrated that it is possible to efficiently turn industrially processed lignin into high-performance plastics, such as bio-based 3D-printing resins, and valuable chemicals. An economic and life-cycle analysis reveals the approach can be competitive with similar petroleum-based products, too.

A paper describing the new method was published on Wednesday, Jan. 19, in Science Advances. The work was supported primarily by funding from the National Science Foundation Growing Convergence Research (NSF GCR) program, which aims to solve problems through multi-pronged, interdisciplinary collaboration. 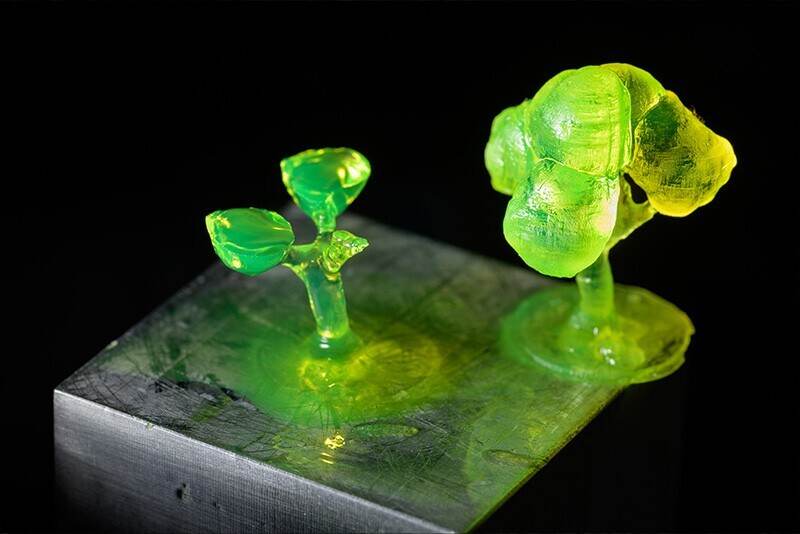 One of the end-products the UD researchers and colleagues are investigating is the creation of bio-resins for 3D printing.

“The ability to take something like technical lignin and not only break it down and turn it into a useful product, but to do it at a cost and an environmental impact that is lower than petroleum materials is something that no one has really been able to show before,” said Epps, who leads the NSF GCR efforts at UD and is the Allan and Myra Ferguson Distinguished Professor of Chemical and Biomolecular Engineering. He also holds a joint appointment in the Department of Materials Science and Engineering.

One of the main problems with upgrading lignin is that most of the processes to do it operate at very high pressures and are expensive and hard to scale. Major drawbacks of current industrial techniques include the safety concerns, capital costs and energy consumption associated with traditional solvents, temperatures or pressures used in the process. To overcome these challenges, the research team replaced methanol, a traditional solvent used in lignin deconstruction, with glycerin so the process could be done at normal (ambient) atmospheric pressure.

Glycerin is an inexpensive ingredient used in liquid cosmetics, soaps, shampoos and lotions for its moisturizing capabilities. But here, the glycerin helps break down the lignin into chemical building blocks that can be used to make a broad range of bio-based products, from 3D-printing resins to different types of plastics, flavor and fragrance compounds, antioxidants and more. 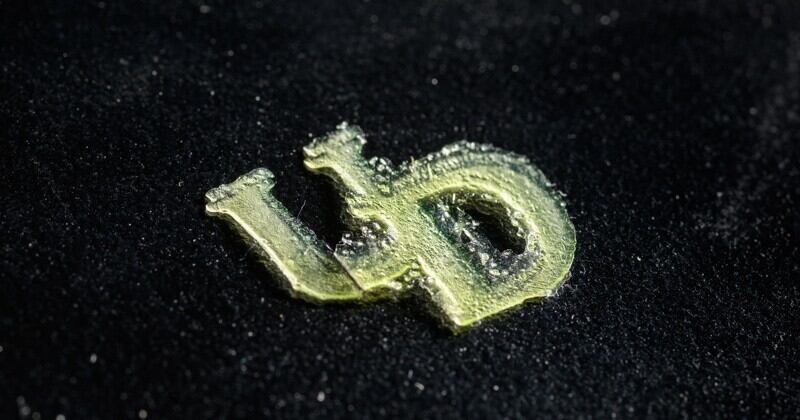 This interlocking UD was created from 3D-printing resin made with technical lignin biomass. This is not a scratch-and-sniff photo, but, if it were, you might detect the slight smell of barbecue. The reason? The aromatic chemical compounds from the UD-developed process are akin to those found in liquid smoke.

Using glycerin provided the same chemical functionality as methanol, but at a much lower vapor pressure, which eliminates the need for a closed system. This change allowed the researchers to do the reaction and separation steps simultaneously, leading to a more cost-effective system.

Operating at atmospheric pressure is safer. Just as important, it also provides a straightforward route to scale beyond small batches and run the process continuously, creating more material with less labor in a cheaper, faster process.

Developing the process so it was repeatable and consistent took about a year and involved contributions from undergraduate students, including Paula Pranda, a co-lead author on the paper.

Pranda, now a doctoral student at the University of Colorado, Boulder, helped optimize the process. She also researched available data sets on what types of products the team could create and estimated the physical properties of those materials. This allowed co-author Yuqing Luo, a chemical engineering doctoral student in Professor Marianthi Ierapetritou’s group, to model the system to see if it was economically feasible.

Luo’s work showed that the UD team’s low-pressure method can reduce the cost of producing a bio-based pressure-sensitive adhesive from softwood Kraft lignin by up to 60% in comparison to the higher-pressure process. The cost advantage was less pronounced for the other types of technical lignins used in the study, but softwood Kraft lignin is among the most abundant types of technical lignin generated by the pulp and paper industry. 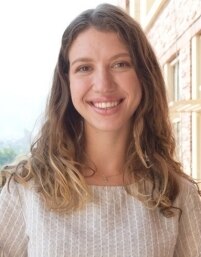 For Pranda, an experimentalist, collaborating with student peers outside her area of expertise like Luo, whose work focuses on modeling chemical processes to understand their cost, was enlightening.

“I had never been part of a collaboration before, and I gained insight on how these other fields of chemical engineering work,” said Pranda.

According to Robert O’Dea, a doctoral student in the Epps lab and the paper’s lead author, Luo’s economic modeling contributions were key to knowing whether to pursue this line of research.

“We knew we could physically do it, but we needed to know whether it actually made any financial sense to do it at the scale of the chemical plant. Yuqing’s analysis showed it does,” said O’Dea.

Assessing technical lignin waste from different types of pulping processes, obtained from project collaborator CanmetENERGY in Canada, allowed Luo to consider how upstream costs like the feedstock price or yield would impact the economics further downstream in the process.

While the analysis demonstrated that yield plays a major role in plant economics, the cost to operate the new, low-pressure process was significantly lower than that of the conventional process in all cases because of reduced capital costs and the generation of valuable co-products. Researchers involved in developing the process, from the Epps group and colleagues in UD Professor Dionisios Vlachos’ research group, currently have a patent pending on the ambient pressure process.

Luo also performed a life-cycle assessment to understand how much greenhouse gas (e.g., carbon dioxide) emissions result from the materials production. Having a good handle on the costs at each step can help researchers explore ways to optimize the process and the material supply chain infrastructure.

“We were trying to capture the bigger picture, not just the costs of the process, but also the environmental impacts across the entire operation,” said Luo.

The student collaboration grew out of meetings between faculty and students involved in materials life-cycle management work at UD, under the NSF GCR program.

“It creates naturally high-impact work because the NSF GCR program encourages us to tackle aspects like the material science and the environmental impacts at the same time. So, we are overcoming multiple bottlenecks and hurdles concurrently through interdisciplinary collaboration,” said Epps.

And what about the UD-developed method’s potential for turning waste into valuable products?

In addition to Epps, O’Dea, Pranda and Luo, other co-authors on the paper include UD alumni Alice Amitrano and Elvis Ebikade; postdoctoral researcher Eric Gottlieb; Olumoye Ajao and Marzouk Benali from Natural Resources Canada, CanmetENERGY; and Dionisios Vlachos, Unidel Dan Rich Chair in Energy, professor of chemical and biomolecular engineering and director of the Catalysis Center for Energy Innovation; and Marianthi Ierapetritou, Bob and Jane Gore Centennial Chair of Chemical and Biomolecular Engineering.

Article by Karen B. Roberts | Photos by Evan Krape and courtesy of Paul Pranda | Photo illustration by Jeffrey C. Chase (featured on UDaily, 01/19/2022)