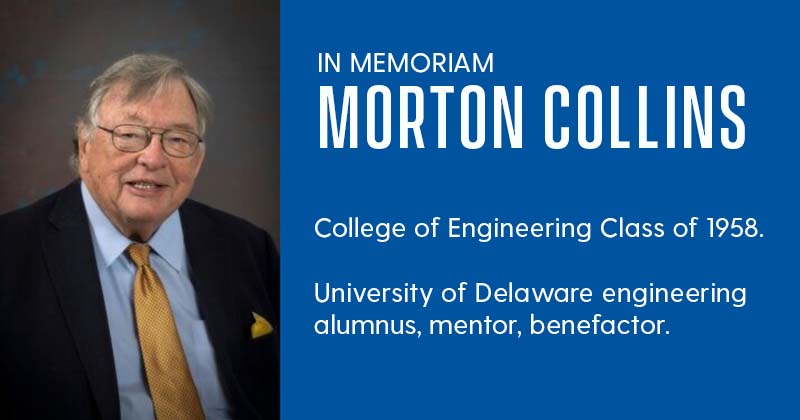 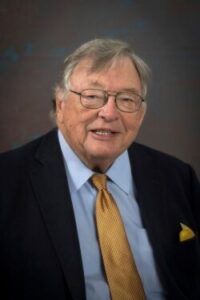 Morton Collins in a 2019 portrait

Dr. Collins, a College of Engineering graduate from the class of 1958 and a 2015 honorary Doctor of Science recipient, passed away on Dec. 14, 2021. His legacy will live on through his generous family and friends, as well as through the students, faculty and staff at the University of Delaware who were affected by his leadership, wisdom and generosity.

“Mort was one of our proudest alumni who empowered the dreams and journeys of fellow Blue Hens through his generous teaching, mentorship and support of graduate and undergraduate students as well as critical facilities on campus,” UD President Dennis Assanis said. “The love that Mort and his wife, Donna, have shown for the University and their passion for motivating others has fueled an enduring legacy of impact for our students. I am truly grateful to him and his family for supporting and inspiring Blue Hens to reach their greatest potential so they too can someday have a lasting impact on the world, just as Mort did throughout his life.”

Path to UD and beyond

Dr. Collins’ childhood would be described by many as “tough” to say the least. His mother died when he was 2, his father passed away shortly before his 12th birthday and the aunt who took him in succumbed to cancer only seven months later. As a ward of the state, it may have been hard to imagine college in his future, and admittedly, it wasn’t part of Dr. Collins’ initial plans.

But his principal at Belhaven Grammar School in Linwood, New Jersey, changed all that. A UD alumnus himself, Kenneth Frisbie, class of 1930, helped Dr. Collins believe in a path that once seemed impossible. A path that led him to the chemical engineering program at the University of Delaware. Mr. Frisbie drove Dr. Collins to his placement interview in UD’s College of Engineering. Dr. Collins was accepted, but had little money. Mr. Frisbie told him, “When you get to the point where they ask for money, tell them you don’t have any.” The University found him a job in the dining hall to help pay for his room and board and “floated” him a loan.

Dr. Collins worked hard to pay his way through UD, having much success in college. During his freshman year he pledged Sigma Phi Epsilon fraternity, and between his freshman and sophomore years, he and friends formed a cooperative to sell the shellfish they harvested. At the end of the summer, he had enough money to pay off the tuition he owed and finance half of the upcoming year. 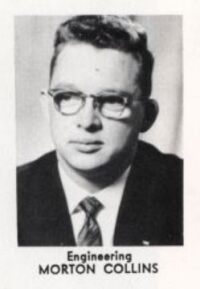 Morton Collins, one of the Outstanding Seniors in the Class of 1958, Blue Hen Yearbook

As a sophomore, Dr. Collins worked for Sinclair Refinery after connecting with a fellow UD alumnus–Walter Coppock, class of 1928, who was the vice president at Sun Oil. The job offered Dr. Collins an excellent income and valuable experience collecting, labeling, distilling and analyzing gas and liquid samples. At summer’s end, Dr. Collins had enough money to pay off the expenses of his entire upcoming junior year.

Dr. Collins also participated in the University’s ROTC program, receiving a commission as a Second Lieutenant in the U.S. Army. In 1963, he was called to active duty where he led a special project team at U.S. Army Picatinny Arsenal and the National Security Agency (NSA) and then trained to fly at Patuxent River Naval Air Station and Marine Corps Air Station Miramar. Dr. Collins went on to fly more than 160 missions in the F-4 Phantom II over the South China Sea operating off the USS Enterprise. Through his lifetime he remained an active private pilot of single and multi-engine aircrafts, turbojets, and even a bright red, open cockpit WACO biplane. He eventually accumulated over 7,000 hours of flying time.

His strong work ethic, self-reliance and fortitude also led him to Princeton University for his doctorate and later led to more than four decades investing in the fields of life sciences, electronic materials, communications and software. In 1968, he founded Data Science Ventures (DSV), a pioneering venture capital firm that had offices in Princeton, NJ, and Newport Beach, CA. DSV partnerships specialized in early stage financing of high technology companies.

Dr. Collins never forgot the impact of his Blue Hen experience, faculty connections and UD education. He and his family generously supported the building of the Allan P. Colburn Laboratory, providing critical research and academic space for students and faculty in the Department of Chemical and Biomolecular Engineering.

In 1998, Dr. Collins and his wife, Donna, established the Morton ’58 and Donna Collins Chemical Engineering Fellowship to support a graduate student in the chemical and biomolecular engineering department. Since its inception, the fund has changed the lives of 33 recipients. Dr. Collins placed a high value on the graduate education experience and was pleased to empower students to pursue their advanced degrees.

“The discoveries made during graduate research are some of the most eye-opening results of your career—whether you go into industry or academia,” Dr. Collins once said. “Experiencing that at an institution like UD is an unparalleled opportunity.”

Dr. Collins extended his support to undergraduate Blue Hens through the Class of 1958 Scholarship, which was established in 1993 by members of the Class of 1958 in honor of their 35th reunion. The scholarship has benefited 91 recipients to date.

Because of their remarkable generosity, the Collinses were recognized as members of UD’s Founders Society, honoring the University’s most generous donors who provide transformational support for UD’s faculty, staff, students and campus by committing $1 million or more cumulatively during their lifetimes

“Mort has been an incredible ambassador and supporter of our College of Engineering. His investments —in our facilities, our students, our vision—have truly transformed experiences and opportunities, helping to empower and inspire the next generation of leaders in engineering,” said Levi Thompson, dean of the College of Engineering. “I will always be appreciative of his support, mentorship and leadership. Mort will be greatly missed, but his impact will live on.”

Dr. Collins’ approachable disposition and willingness to impart his lessons learned, made it an easy choice to connect with Blue Hens as a guest lecturer and mentor.

Dr. Collins’ expertise in his field, love for his alma mater and desire to give back, led him to the Department of Chemical and Biomolecular Engineering Advisory Council. For nearly 30 years, he was a member of the council and served as the chairperson from 1984 to 2010. He was also a valued member of President’s Leadership Council, which serves as an advisory group to the UD president, and is also the Campaign Cabinet for Delaware First: The Campaign for the University of Delaware.

Dr. Collin’s engagement and philanthropy with UD as well as his professional and personal achievements have earned him many honors at the institution. In 1988, he was honored as part of the Alumni Wall of Fame and in 1989 he received the Medal of Distinction, the highest non-academic award bestowed by the University’s Board of Trustees. It recognizes individuals who have made humanitarian, cultural, intellectual or scientific contributions to society; who have achieved noteworthy professional success; or who have given significant service to the University, community, state or region.

At the University’s Commencement ceremony in 2015, Dr. Collins received UD’s highest academic honor when he was awarded an honorary doctor of science degree. Hailing him as a loyal alumnus, a nationally respected technology leader and a champion for next-generation technology, the citation noted, “Dr. Collins, you have dedicated your professional life to nurturing and supporting innovation that will change and improve the way we all live.”

Professionally, Dr. Collins received countless accolades, including being inducted into the National Academy of Engineering in 2016, which is among the highest professional distinctions accorded to an engineer.

“Mort lived an extraordinary life. His strength, perseverance, hard work, curiosity and intellect led him to great achievements,” said Jim Dicker, vice president of Development and Alumni Relations. “I was honored to know him, and UD is privileged to have counted him among our alumni and be on the receiving end of his generosity.” 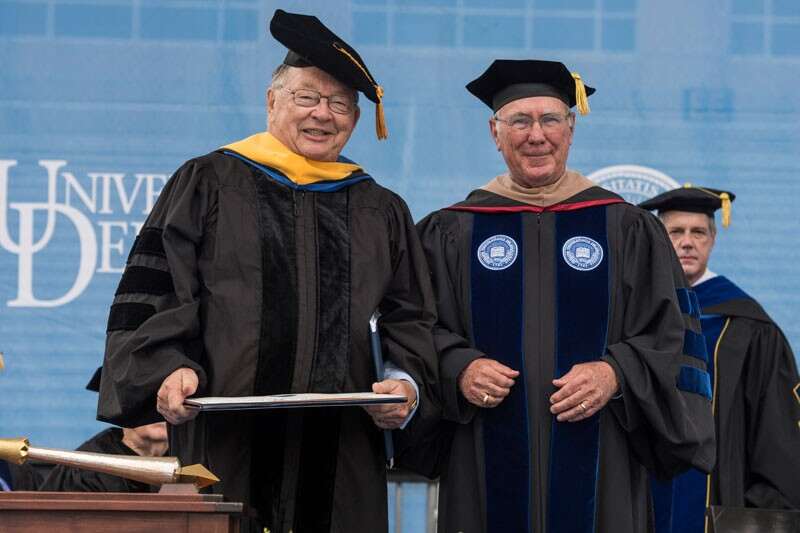 At Commencement on May 30, 2015, Morton Collins, shown here with UD Board Chairman Gil Sparks, received an honorary doctor of science degree.