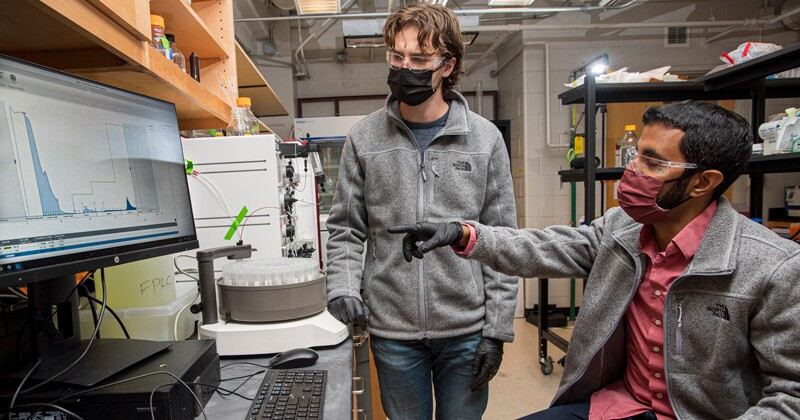 Aditya Kunjapar (right), an assistant professor in the Department of Chemical and Biomolecular Engineering, works in his lab with Neil Butler. Kunjapar has been awarded the 2021 American Institute of Chemical Engineers (AIChE) Langer Prize for Innovation and Entrepreneurial Excellence, a highly competitive award that comes with a stipend to pursue “blue sky” ideas.

Most researchers hope they will be the one to discover the next big breakthrough advance for society, like finding a cure for cancer or climate change. But groundbreaking ideas usually mean taking risks in innovation, which calls for scientists and engineers who aren’t afraid to dream big.

That’s exactly what the American Institute of Chemical Engineers (AIChE) is looking for when it awards the Langer Prize for Innovation and Entrepreneurial Excellence to researchers pursuing “blue sky” ideas, like UD’s own Aditya Kunjapur.

Kunjapur, an assistant professor in the Department of Chemical and Biomolecular Engineering, has been awarded the 2021 AIChE Langer Prize to help transition bacteria-based technology that his lab has developed toward the marketplace. He marks only the third recipient of this grant, which is awarded to original ideas that have a real promise of providing valuable contributions to society. 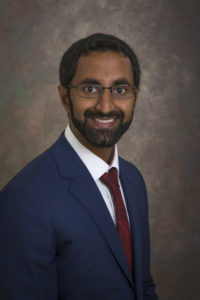 “There are a lot of things that I like about what AIChE has done by creating this particular award. One of those is that they are recognizing that entrepreneurship is really important,” Kunjapur said. “This is true in general for science, but even more so in the current environment where academic discoveries and inventions related to biotechnology need to be translated to help make a difference in people’s lives.”

Kunjapur’s work has focused on engineering bacteria to perform a wide array of functions, from producing fuels and chemicals to treating or preventing disease. In his lab, which was launched at UD only three years ago, he is focusing on creating and harnessing new chemical building blocks using genetically engineered bacteria. In the case of the project supported by the Langer Prize, Kunjapur’s Lab is exploring whether bacteria can produce amino acids that will elicit a stronger immune response, which could lead to applications in vaccines or as immunotherapies.

“What we’re doing is trying to put something onto those proteins that says, ‘Hey, look at me!’ to the immune system,” Kunjapur said. “Our community of synthetic biologists has gotten so good at changing the genetics of a microbe. You’d think — especially during a global pandemic — that we might have a lot of tools that would be relevant. In fact, we do. And my colleagues have done a lot of great work in this area.”

With antibiotic resistance on the rise, having better vaccine candidates to battle troublesome bacteria would decrease our reliance on finding new antibiotics. Now, he’s exploring whether synthetic biology tools can lead to the design of a vaccine that could work against bacteria for which there currently are no vaccines.

“This project so far is the work of one really outstanding graduate student,” Kunjapur said, giving credit to Neil Butler, a chemical engineering graduate student. “It’s been his initiative from day one, and his work played a huge role in earning this prize.”

It can be challenging to fund “blue sky” ideas because those out-of-the-box ideas are also often a higher risk to explore. That’s why it’s notable that the $75,000 stipend connected to the award is completely unrestricted. Kunjapur said Langer Prize funding will allow his lab to further explore commercialization of their discoveries, contract out more research, accelerate the technology and continue conversations with companies to learn about their needs.

“This funding will allow us to begin to perform higher-risk, more expensive experiments that are normally difficult to fit in the budget of a new lab,” Butler said. “I’m excited to push these directions forward.”

That success in the lab, as well as support from the Langer Prize, has allowed Kunjapur’s group to seek a new entrepreneurial postdoctoral fellow with experience in protein engineering, next-generation sequencing and immunology to start in mid-2022. Interested applicants should reach out to Kunjapur directly before Friday, Dec. 31.

The Kunjapur Lab has been working on this project since its inception, and has also received research funding from the National Science Foundation. More recent NSF support came from Horn Entrepreneurship’s NSF I-Corps Sites Program for commercial translation of their work. Through that program, Butler participated in training and conducted interviews with customers and companies that could find value in their synthetic biology-based technology.

“Using synthetic biology, we believe bacteria can synthesize proteins that are better targets for the immune system,” Butler said. “Innovative alternatives to traditional vaccination methods should be pursued.”

The Langer Prize itself, like Kunjapur’s lab at UD, is relatively new. Named after Robert S. Langer, one of 12 Institute professors at the Massachusetts Institute of Technology, the prize is awarded to entrepreneurial researchers aiming to address challenges in a variety of industries. The award, first granted in 2019, comes with unrestricted seed funding “to tackle high-risk, high-impact challenges with the potential of achieving game-changing innovations.”

Kunjapur, who finished his postdoctoral work at Harvard Medical School in 2018, is only the third honoree of the Langer Prize, which is intended for early-career researchers demonstrating entrepreneurial excellence in innovations. He joined the UD faculty in 2018, and since then has been named an Emerging Leaders in Biosecurity Initiative Fellow (in 2019) and to the “35 Under 35” class of the American Institute of Chemical Engineers (in 2020).

Langer and Kunjapur have more in common than just this award. Kunjapur was a student in MIT’s chemical engineering department and could have pursued working for him in the esteemed Langer Lab, he said.

“At the time, I just didn’t think of myself as being that interested in drug delivery or biomedical research,” Kunjapur said as he recalled a talk by Langer that he attended as a first-year grad student. Listening to Langer’s story of his own professional journey helped Kunjapur realize that working in a well-established field like the oil and gas industry would mean that success would revolve around truly incremental changes — like making a process just 0.00001% better. Inspired by Langer’s decision to turn down the oil and gas industry for uncharted waters, Kunjapur found himself on his own innovative journey.

Now, small scientific ventures chasing “blue sky” ideas like those being explored in Kunjapur’s lab are on the front lines of societal leaps and bounds in the face of a global pandemic. Start-up technologies with academic roots have been instrumental to the success of the Moderna and Pfizer vaccines for COVID-19.

“It’s important to just try things that are a little outside of the box or higher risk,” Kunjapur said. “Even though we have this kind of aging infrastructure for scientific funding, society is still capable of doing things on a remarkable scale and pace. It’s just incredible what progress in biotechnology has been achieved in the last three years.”