A ‘HAT TRICK’ OF HONORS FOR UD’S JAYARAMAN 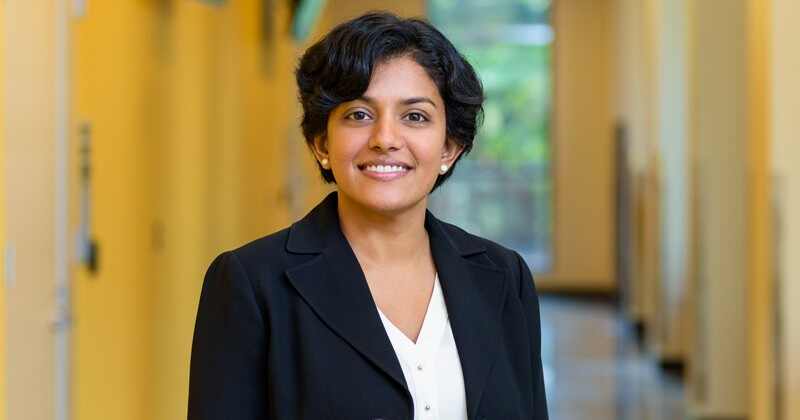 In the past year, Arthi Jayaraman, Centennial Term Professor for Excellence in Research and Education in the College of Engineering, has been named a fellow of the American Physical Society, won an Impact Award from the American Institute of Chemical Engineers and was appointed deputy editor of a journal published by the American Chemical Society.

With a passion for polymer research and teaching, Arthi Jayaraman of the University of Delaware often finds herself wearing a lot of hats — figuratively, at least.

“My research has me putting on different hats,” said Jayaraman, Centennial Term Professor for Excellence in Research and Education in the College of Engineering. “Sometimes I have to put on the physicist hat, sometimes the chemist hat, and always the engineering hat.”

In the past year, professional societies in all three disciplines have recognized her work and its value to their field.

Jayaraman leads a computational materials research lab as a professor of chemical and biomolecular engineering and materials science at UD.

She also loves to teach, loves to be in front of a crowd of eager learners and is devoted to sharing science with the broadest possible audience, making quality science communication a priority.

“I’m passionate about science, education and training our next best scientists,” she said. “I also believe that the science we create should be shared. I share that in my classroom and with my research community through our papers. I also strongly support that dissemination with a broader community around the world. This motivated me to take on this new editorial role in the new open-access journal ACS Polymer Au.”

What drives her in all these roles is her love for polymers, substances made up of long chains of uniform molecules. They are everywhere and make amazing building blocks, whether they are produced naturally (silk, hair, DNA for example) or synthetically (plastics, for example).

“They can be in tires, in rocket ships, on a plane and they can be designed to carry a drug into the human body,” she said. “We’re all made of biopolymers, chain molecules that have a unique chemistry programmed in.”

Working at different scales requires the kind of expertise her team has.

“Polymers have non-trivial structures at different scales — Angstrom scale, nanoscale and micron scale,” she said. “To study these materials computationally, one has to select or develop the right model that captures that structure at the scale of interest. One model doesn’t fit all, and that adaptability is something my group works on.”

Her computational expertise pulls many aspects of scientific inquiry together, but she especially cherishes her collaborations with two kinds of researchers, she said — those who synthesize polymers and those who characterize the materials in a wet lab.

One close-to-home example is Jayaraman’s collaboration with UD’s Kristi Kiick, Blue and Gold Distinguished Professor of Materials Science and Engineering. She worked with Kiick to characterize protein-like polymers, predict their stability and thermodynamic behavior in specific conditions and ensure they will behave the way Kiick and her team want them to behave in their biomedical research.

That points the way to new materials and better materials.

Computational skills are essential to advances in research and Jayaraman’s excellence in that work is reflected in the honors received from these three independent scientific societies.

The Impact Award from AIChE COMSEF recognizes outstanding research in computational molecular science and engineering, including methods and applications.

The editing position with ACS Polymers Au reflects her leadership in polymers research and her communication skill. She and Associate Editor Prof. Harm-Anton Klok of the Federal Institute of Technology (EPFL) in Lausanne, Switzerland, just released the first issue of the journal.

“Arthi is the complete package,” said Jan Genzer, S. Frank and Doris Culberson Distinguished Professor of Chemical and Biomolecular Engineering at North Carolina State, who nominated her for the APS fellowship and was a co-adviser for Jayaraman when she was a doctoral student at N.C. State. “She mentors her students and collaborates with a large group of people. Many of her collaborators are experimentalists and that’s very atypical for people who do simulation and modeling. She is highly sought after by my colleagues who do experiments.”

The daughter of an engineer and an educator, Jayaraman said she loved computer programming when she was growing up in Madras, India, and that lifelong skill along with her interest in chemical sciences has served her well.

“My parents were always supportive and were a driving force for me and my sister, who is an accomplished researcher in biophysics,” Jayaraman said. “I was fortunate to have that push and encouragement from my parents. We came from a lower-middle class family. My parents prioritized our education over luxury and that paid off.”

Her other awards include the Department of Energy (DOE) Early Career Research Award and young investigator awards from the American Institute of Chemical Engineers (AIChE) and the American Chemical Society (ACS).