A GENTLEMAN AND A SCHOLAR 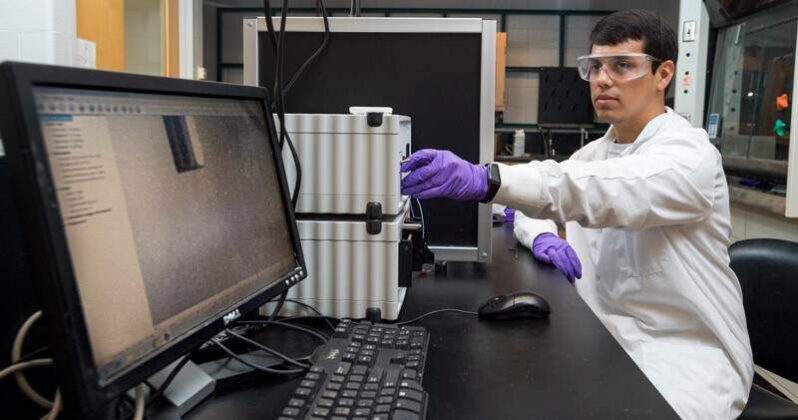 As part of his work with UD’s Center for Plastics Innovation, Eduardo Nombera-Bueno works with an electrospinner, a machine used to create incredibly strong synthetic fibers thinner than a human hair.

Eduardo Nombera-Bueno can vividly recall flying with his family, in 2006, from their home city of Lima, Peru, to the United States. Although he was only five at the time, he still remembers feeling a sense of nervous excitement — he could not fully understand the circumstances, he said, but he knew something big was happening.

That something big was a job transfer for Nombera-Bueno’s father, resulting in a move to Miami — a relatively easy transition for a Spanish-speaking child entering a majority-Hispanic kindergarten class. But, three years later, the family moved again, this time to a mostly white town in northern New Jersey. Nombera-Bueno, now eight, was repeatedly made to feel like an outsider. 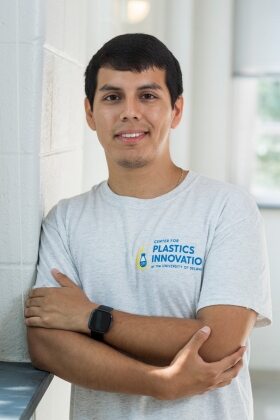 Peru-native Eduardo Nombera-Bueno, a rising junior, is an Honors student double-majoring in chemical engineering and materials science and engineering. Recently, he was awarded a prestigious scholarship from the American Chemical Society.

“I definitely received a lot of comments growing up,” he said. “They weren’t all mean-spirited; sometimes, people are trying to be nice, and they don’t realize the magnitude of their words. One example is a frequent compliment I received as a kid: ‘You are so smart… for someone like you’.”

Now, Nombera-Bueno is proving exactly what ‘someone like him’ can do. A rising junior at the University of Delaware, the Honors student is double-majoring in chemical engineering and materials science and engineering. Recently, he was chosen from a competitive pool of 412 applicants across the nation by the prestigious American Chemical Society to become one of 156 ACS Scholars. Translation: As an underrepresented minority with career aspirations in the chemical sciences, strong academic and leadership skills and a commitment to service, Nombera-Bueno has been awarded $10,000, to be split between his junior and senior years.

The aspiring engineer credits his success thus far, partly, to the support network he had growing up — people who nurtured his potential and helped buffer him against the biases of others — as well as the inclusive community he has found at UD.

“I have never felt out of place here,” he said. “Any discrimination I faced through elementary school, middle school and high school… I’ve never felt that here. I have a lot of mentors on campus who are people of color, and the principal investigators I’m working with are both people of color. I feel like I’m in a place where I belong.”

This sense of belonging allows Nombera-Bueno to do his best work, which usually involves experimenting with plant-based alternatives to petroleum-derived plastics in UD’s Center for Plastics Innovation. Most recently, he has contributed to research groups led by College of Engineering Professors Thomas H. Epps, III and LaShanda Korley. Korley first alerted Nombera-Bueno to the scholarship opportunity and nudged him to apply. “She’s among my biggest inspirations on campus; I truly admire her,” he said. 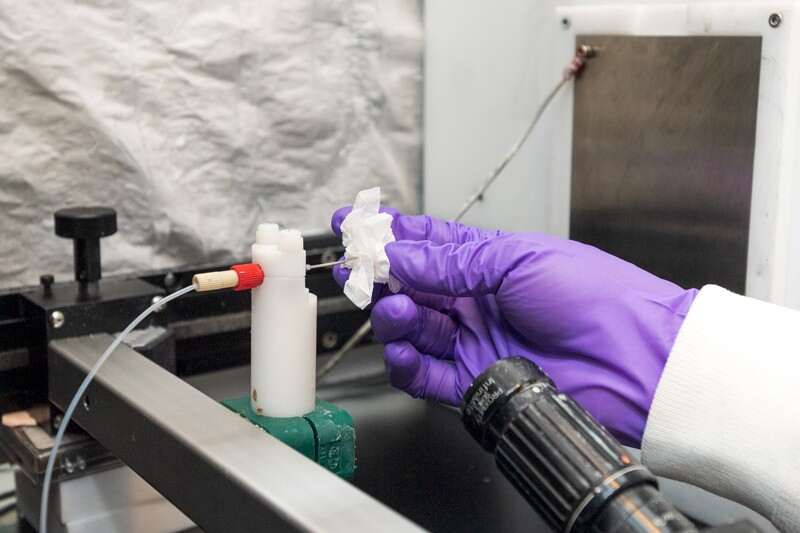 Eduardo Nombera-Bueno cleans the needle tip of an electrospinning machine, as part of his work experimenting with plant-based alternatives to petroleum-derived plastics.

For this and all opportunities afforded to him at UD, Nombera-Bueno spends a lot of time giving back to the University community. He conducts tours of the College of Engineering, serves on a diversity, equity and inclusion board for his major and frequently mentors incoming Blue Hens — often from underrepresented groups.

“There is a cliche: Immigrants have to work twice as hard to get a quarter of the way there,” he said. “It’s not always the case, but it can be true. So it is rewarding to see members of these minority groups succeed — that brings me a lot of happiness.” It also, he added, benefits the field as a whole by ensuring a variety of problem-solving perspectives at the laboratory table.

As for the future, Nombera-Bueno would like to earn his doctorate before a career, possibly in academia, where he can continue paying forward the encouragement he has received from mentors during his time as an undergraduate.

But no matter where the path leads for ‘someone like him,’ he said, one thing is certain: “I still have a lot left to accomplish in my life. I have a very long way to go.”

ChemicalA GENTLEMAN AND A SCHOLAR