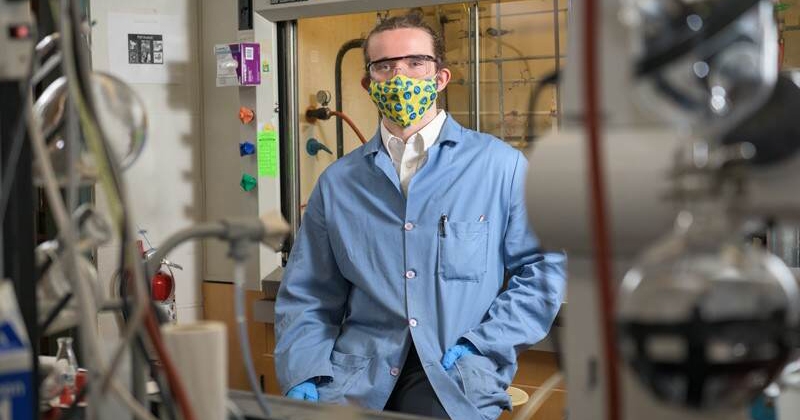 Jackson Burns one of 68 engineering majors recognized across the U.S.

Jackson Burns, an honors chemical engineering student at the University of Delaware, has been selected for the Goldwater Scholarship, one of the most prestigious scholarships in the natural sciences, engineering and mathematics in the United States. Burns is one of 410 college students, 68 of them engineering students, selected from more than 5,000 applicants in 2021.

Burns, who is from Edgewood, Kentucky, wants to make science more accessible and sustainable. He plans to eventually become a professor and create open-source simulation projects to replace expensive experimentation. He is building a strong foundation with research that merges principles of chemical engineering, organic chemistry and computer science.

During his first year at UD, Burns joined the laboratory of Donald Watson, professor of chemistry and biochemistry.

As an undergraduate researcher, Burns works with Watson on high-throughput experimentation — methods to conduct a large volume of experiments simultaneously to speed up the process of discovery. This speed is critical for developing new pharmaceuticals, especially against emerging diseases such as COVID-19 that require fast solutions. 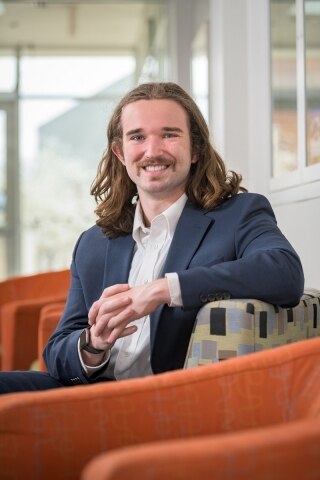 Jackson Burns works in the laboratory of Don Watson, a professor of chemistry and biochemistry, to bring computer science, artificial intelligence and automation to research in chemical engineering.

Many molecules used in pharmaceuticals have carbon-nitrogen bonds. The Watson lab works on improving the efficiency of chemical reactions used to make several substances containing these bonds.

Most first-year students haven’t yet taken the courses needed to understand this particular research, and neither had Burns when he joined. But that didn’t stop him from listening to his lab mates, studying them on his own and getting going.

“He was able to pick up on what we were doing in the research program, and it just became pretty apparent that he’s just a special kid,” said Watson.

To optimize the chemical reactions in the lab, Burns draws from both his chemical engineering major and computer science minor.

“Chemical engineering and computer science teach you two different ways to solve problems,” Burns said. A chemical engineer might approach a problem with a combination of mathematical models and experiments to arrive at a cost-effective design. A computer scientist might focus more on defining which parts of the problem can be solved at a given time and then running code to solve them.

“Both of those are extremely valuable, especially when you start to put them together,” he said. “With engineering, of course, you’re going to have to use a lot of physical resources, which can be expensive and slow, but at the same time, a lot more accurate than a lot of pure simulation, So I think mixing those two together is probably where my perspective is a little bit different.”

When Watson asked Burns for help developing a visualization software for experimental results, Burns went further and created a program that helped the team analyze the data, too. Watson was impressed.

“He’s bringing a really unique vantage point to our group right now,” said Watson. “It’s very rare for students in our field to have a deep background in computer science, and so that’s really given him a lot of unique tools, I think, to be able to tackle problems in ways that we don’t typically tackle them in organic chemistry. He’s been able to write software tools for us that have been really just flat out useful, from data processing and speeding up some complicated data acquisition that we’re doing.” 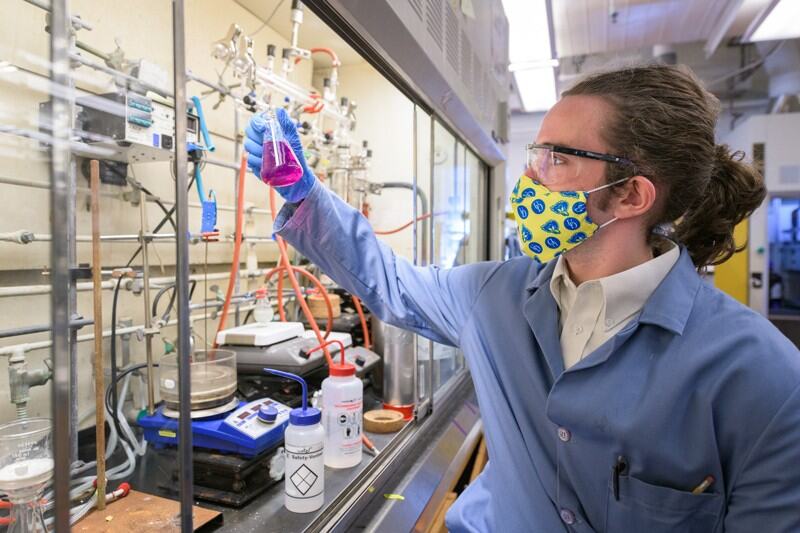 Jackson Burns is an honors engineering student, Distinguished Scholar, Grant Challenges Scholar, and Treasurer for UD AIChE (American Institute of Chemical Engineers) who has been named a Goldwater Scholar.

Some scientists are great at crunching numbers and formulating hypotheses. Others excel in the hands-on laboratory environment. Burns is the rare student who shines in both settings.

He fell in love with lab work when he was still in high school. After taking AP Chemistry, he did research with professor Kebede Gemene at the nearby Northern Kentucky University.

“Every single experiment is like brand new knowledge,” he said. “Every conclusion that you draw is something that no one’s ever seen before. It’s like you are sitting on the edge of human understanding and just pushing it that much further at a time — like very, very little amount, maybe a millimeter at a time. But it’s just an exciting place to be.”

Of course, COVID-19 interfered with his laboratory work, but Burns stayed productive working on adding machine learning to his projects. After a year away from the lab, he suited up and went back to the fume hood in April 2021 to make some new molecules based on this work.

Burns will spend the summer of 2021 in a research internship at the Massachusetts Institute of Technology (MIT). He will study under Connor Coley, an assistant professor of chemical engineering he met at a conference, thanks to his involvement in the UD chapter of the American Institute of Chemical Engineers (AIChE).

After he graduates from UD in 2022, Burns plans to attend a doctoral program. Humans need help detecting the trends that decide how much of something will be created in certain chemical reactions. Burns wants to teach computers to run those predictions faster so scientists can get more done in less time.

“My vision for myself in graduate school is continuing a lot of this work, trying to use machine learning, coupled with organic chemistry to try to really, really move the pace of discovery faster,” he said.

Later on, he’d like to become a university faculty member. More than a year as a UD teaching assistant has shown him that he enjoys educating others. “Helping other people reach really important conclusions about the things that they’re trying to understand, it’s just highly rewarding on a personal level to me,” he said.

Until then, he plans to keep up his research and his involvement on campus with organizations like AIChE, which offers valuable networking opportunities with academic leaders, industry executives and classmates in UD’s highly ranked chemical engineering program. The collegial environment among students is one of many things that makes UD chemical engineering special.

“UD offers a highly collaborative environment, so you’re getting a world-class education, absolutely competitive with any other university on Earth,” said Burns. “But it is absolutely not cutthroat. You don’t have students stepping on each other’s toes to try to get to opportunities before other people. You really are lifting each other up. You are working together to try to finish your degree with the highest GPA you can and get the most out of your time at the university.”

UD’s collaborative campus environment also enables special opportunities for students, said Watson. “Jackson has benefited strongly from being in a place where he can work across multiple departments,” said Watson. “As an undergraduate, you know, I think that’s actually pretty unique.”

The Barry Goldwater Scholarship and Excellence in Education Foundation was established by Congress in 1986 to serve as a living memorial to honor the lifetime work of Senator Barry Goldwater, who served his country for 56 years as a soldier and statesman, including 30 years in the U.S. Senate. By providing scholarships to college sophomores and juniors who intend to pursue research careers in the natural sciences, mathematics and engineering, the Goldwater Foundation is helping ensure that the U.S. is producing the number of highly-qualified professionals the nation needs in these critical fields.