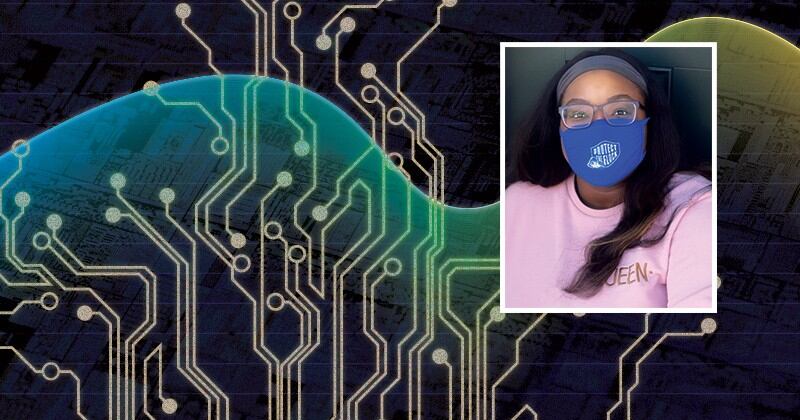 UD senior Afsa Simpson reflects on her time as a student in the College of Engineering, and her involvement in UD’s Resources to Inspire Successful Engineers (RISE) program, which is geared towards inspiring undergraduate engineering students from historically under-represented backgrounds to succeed at the highest levels within UD programs and beyond in their careers as engineers.

Ever since she completed a research project in high school looking at ways to shorten the extraction time of chemical warfare agents in soils, University of Delaware senior Afsa Simpson was drawn to chemical engineering.

For that project, Simpson worked with chemical engineers on a local military base. She explained that the United States military used to hold — and in some cases, still holds — chemical warfare agents in the Midwest. Whenever those chemical warfare agents are transported or disposed of, the military wants to make sure that they don’t harm the area and so they run tests on the soil.

Simpson said the process she researched took about an hour and a half to determine if there were chemical agents present in the soil samples. Her project aimed to see if they could shorten the extraction time and still get accurate measurements or if the hour and a half time frame was necessary for the limits of detecting the presence of chemical warfare agents.

“I found that experience really interesting and enriching,” said Simpson. “I enjoy process optimization and a lot of chemical engineering is about taking a given process or given parameters to try and find the best way to make it happen so I really enjoyed it and decided to major in it.”

During her four years at UD as a student in the College of Engineering, Simpson became actively involved in UD’s Resources to Inspire Successful Engineers (RISE) program, which is geared towards inspiring undergraduate engineering students from historically under-represented backgrounds to succeed at the highest levels within UD programs and beyond in their careers as engineers.

Now a senior reflecting on her time at UD, Simpson said that she is grateful that RISE gave her the opportunity to interact with a core group of engineering students on a regular basis.

“When I was an underclassman, there were always older chemical engineers who would give advice and give help with some of our courses,” said Simpson. “Now that I’m an upperclassman, it’s the same thing in the other direction with me offering advice to the younger students. I think that was the best part of the RISE Program for me.”

Marianne Johnson, the academic program manager for student development and support and the RISE Program, explained that RISE at UD is 49-years old and averages 120 students a year.

RISE students often come from the top of their high school classes and have often been recruited to attend UD and the College of Engineering.

“Most of the students come into the college and into the RISE program with a pretty definite idea of what they want to do and who they want to be. That is a testament to their strength and their resilience,” said Johnson. “They have many of the tools that they need individually to be successful and we’re just there to augment what it is that they already bring to our environment.”

Much like Simpson’s experience, the RISE Program encourages students to participate in the program from their first year through senior year to serve as mentors.

“One of the high points of our program is the ability for the younger students to have those older students as informal mentors. We get to see the growth in their leadership and their confidence and their desire to be what they saw in someone else, for someone else,” said Johnson. “The younger students can see, ‘This person is a senior, they had to have gone through some of the things that I am going through, and they’re about to graduate.’ So those older students offer encouragement or a beacon of hope for some students.”

As she gets set to graduate in the spring of 2021 with a degree in chemical engineering, Simpson will hit the ground running in her professional career as she begins work as an analyst for Deloitte in the summer. At Deloitte, she anticipates working with different projects, advising companies on security systems as well as offering recommendations on the best machines they could use for employees to increase productivity.

To help expand her skills in computing technology, Simpson, as well as fellow UD students and RISE participants Jasmine Garvin and Keith Morgan, participated in the Brookhaven National Laboratory Computational Science Training Course during the fall of 2020.

A portion of the financial support the RISE Program receives is from the Louis Stokes Alliance for Minority Participation (LSAMP), which is a grant from the National Science Foundation. The opportunity to participate in the Brookhaven National Laboratory Computational Science Training Course was shared with students through information that came from LSAMP.

Simpson said that she has done a lot of coding and computer science work by virtue of being an engineering student at UD — as well as attending a high school focused on science and math — but this course expanded her knowledge, focusing not only on coding but on computing in a broader sense.

“Instead of coding and simply going, ‘I want to find the sum of all these numbers in this array and tell me the average’ or to answer something very specific, computing was more so having a grand problem and using the computer to go through and solve massive problems,” said Simpson. “It was looking at data analytics, spatial problems, analyzation and looking at the different ways you can use computing versus the way we normally use coding.”

Simpson said that one of the goals of the course was to get students into computing because the way that companies, especially Brookhaven National Laboratory, are using their technology is less so focused on coding and more so focused on computing.

For more information on the RISE Program at UD, check out the program’s website or contact Johnson at mtj@udel.edu or Amber Spivey at maspivey@udel.edu.