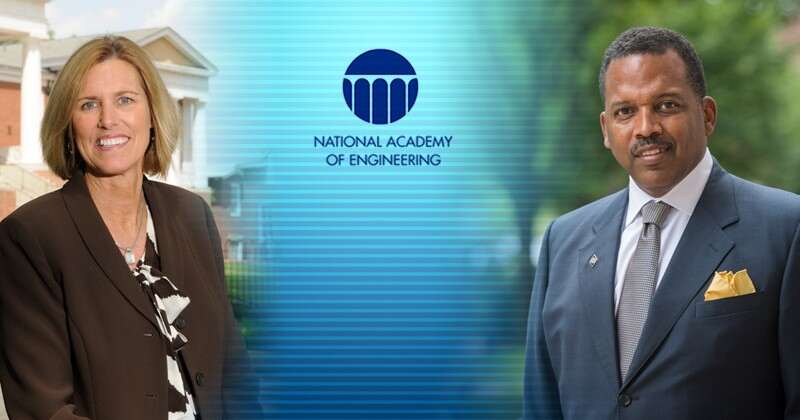 Terri L. Kelly (left), vice chair of the UD Board of Trustees and Levi T. Thompson, dean of the College of Engineering

Two University of Delaware alumni and current leaders — Terri L. Kelly, vice chair of the UD Board of Trustees, and Levi T. Thompson, dean of the College of Engineering — have been elected to the National Academy of Engineering. Election to NAE is among the highest professional distinctions accorded to an engineer.

Thompson, who is also the Elizabeth Inez Kelley Professor of Chemical Engineering, was selected “for advances in catalysis and energy storage, entrepreneurship and academic leadership.”

Kelly, the retired president and CEO of W.L. Gore & Associates, was selected “for leadership in product development and commercialization by advancing management practices that foster innovation.”

“This is a tremendous honor for two distinguished members of the UD family,” said UD President Dennis Assanis, a member of NAE since 2008. “The election of Levi and Terri demonstrates, once again, the power of a UD education to transform lives and put students on the path to success. While their NAE membership recognizes their contributions to engineering, entrepreneurship and innovation, we are so grateful for their ongoing contributions to the University as leaders in our community.”

“My journey as an engineer started right here at the University of Delaware, where I learned and honed skills that launched my academic career and whetted my appetite for innovation,” said Thompson. “After spending 30 years at the University of Michigan, then returning as dean of the UD College of Engineering, I am honored and humbled to join my colleagues here at UD and back at UM as a member of the National Academy of Engineering. I will continue to work to educate and inspire the next generation of engineers at Delaware and beyond so that they can make a difference in this world. I am proud to be recognized by the NAE alongside Terri Kelly, a fellow UD-educated engineer who has improved countless lives through engineering. This is a great year for UD Engineering.”

Kelly said of her NAE election, “Throughout my education and my career, I have known that UD offers an exemplary education in engineering, as well as many other fields, which is why I continue to be engaged with the University. To be recognized by the NAE is humbling, and I consider it a testament to the strong education I received from UD.”

Thompson rejoined UD as the dean of the College of Engineering in 2018. He was previously the Richard E. Balzhiser Collegiate Professor of Chemical Engineering at the University of Michigan, Professor of Mechanical Engineering and director of both the Hydrogen Energy Technology Laboratory and the Michigan-Louis Stokes Alliance for Minority Participation. Since returning, he has led the college in a strategic planning process focused on growth for impact and establishing Delaware as the destination for people who want to improve the world through engineering. It is starting to pay dividends with improvements in diversity, increases in research expenditures and the launch of several major research centers.

Two University of Delaware alumni and current leaders — Terri L. Kelly (left), vice chair of the UD Board of Trustees and Levi T. Thompson, dean of the College of Engineering — have been elected to the National Academy of Engineering. Election to NAE is among the highest professional distinctions accorded to an engineer.Thompson, a Fellow of the American Institute of Chemical Engineers, is internationally recognized for his research on nanoscale materials for catalytic and energy storage applications and is an award-winning educator.

He co-founded a start-up called T/J Technologies, a developer of nanostructured materials for lithium ion batteries, and helped to spin off a second start-up, Inmatech Inc., from the University of Michigan to commercialize low cost, high-energy density supercapacitors.

Thompson was on the American Institute of Chemical Engineers (AIChE) Board of Directors from 2014 to 2016 and was a consulting editor for the AIChE Journal. He also served on the National Academy’s Chemical Sciences Roundtable, National Science Foundation Engineering Directorate External Advisory Committee and Standing Committee on Chemical Demilitarization, Board on Army Science and Technology. He currently serves on the Department of Energy’s Hydrogen and Fuel Cell Technical Advisory Committee (HTAC), Editorial Committee for Annual Review of Chemical and Biomolecular Engineer, and several college and departmental advisory committees.

Kelly is the retired president and CEO of W.L. Gore & Associates, a multi-billion dollar enterprise that employs more than 8,000 associates in 45 plants around the world.

She serves as vice chair of UD’s Board of Trustees, which she joined in 2009, and is a trustee of the Unidel Foundation. In 2014, she was honored with the UD Alumni Wall of Fame award. She also serves on the UD College of Engineering External Advisory Council.

Kelly joined Gore as a process engineer in 1983 after graduating from the University of Delaware with a bachelor’s degree in mechanical engineering. In 1998, Kelly became part of the leadership team for the global Fabrics Division. In this role, she helped establish a fabrics manufacturing plant in Shenzhen, China — Gore’s first fabrics plant in Asia. While in the Fabrics Division, Kelly also served on the Enterprise Operations Committee working closely with the CEO and other leaders to help guide the strategic direction of the company. Kelly’s leadership abilities have driven her success in a company known for its non-hierarchical “lattice” structure.

At Gore, associates become leaders based on their ability to gain the respect of their peers and to attract followers. Terri earned the title of president and CEO in 2005 — one of the few titles within the enterprise — following a peer-driven selection process.

Kelly is a member of the Management Executives’ Society, the Forum of Executive Women of Delaware and the International Women’s Forum. She also is a trustee of the Alfred I. duPont Charitable Trust, whose primary beneficiary is the Nemours Foundation — one of the nation’s leading children’s health care systems — and is a member of the boards of United Rentals and ASML.