$11 MILLION FROM NIH FOR RESEARCH 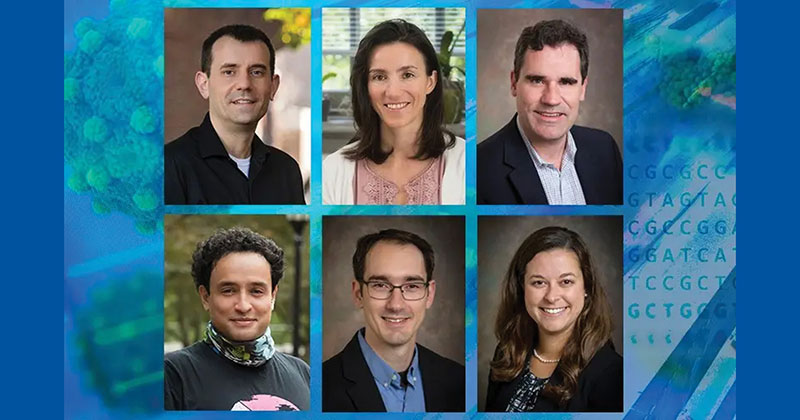 University of Delaware Professor Joe Fox (top right) leads the Center of Biomedical Research Excellence that has won a second phase of funding from the NIH. Newly added to the research team are (top row, left to right): Jeff Mugridge and Ramona Neunuebel and (bottom row, left to right) Juan Perilla, Karl Schmitz and Catherine Fromen.

Biomedical research at the University of Delaware has fresh fuel for the next five years, as the National Institutes of Health has renewed a Center of Biomedical Research Excellence (COBRE) grant for a second phase, worth more than $11 million.

The work of this team of scientists is focused on discovery of new molecules that can be used to study and treat diseases such as breast cancer, renal cancer, Crohn’s disease, tuberculosis and Legionnaires disease.

“Interdisciplinary collaboration is a hallmark of UD research, and this renewal grant from the National Institutes of Health recognizes the successful track record and the continued excellence of an exceptional team of biomedical researchers and its leader, Professor Joe Fox,” said University of Delaware President Dennis Assanis. “Their work will advance the development of new therapies for treating diseases that have afflicted so many. We congratulate this team and look forward to the exciting developments to come.”

The research team will be based at UD’s Science, Technology and Advanced Research (STAR) Campus.

Five new researchers have been added to the grant in this phase, including Catherine Fromen (chemical and biomolecular engineering); Jeff Mugridge and Juan Perilla (chemistry and biochemistry); and Ramona Neunuebel and Karl Schmitz (biological sciences).

The grant extension also will further expand the center’s capabilities with development of a Proteomics Core to allow custom synthetic chemistry, Fox said.

The first phase of the grant produced many advances, including 11 major NIH grants, and led to new techniques now used for drug-discovery work by major pharmaceutical companies and research groups around the world.

“This has had an impact on science and human health,” said Fox. “It is exciting for the outstanding cohort of colleagues who will benefit from this grant. Some of our most successful faculty were hired and supported during Phase 1. There are some real rock stars in there. It has been great. And the idea that we’ll be able to do this again is exciting to me.”

Grimes and Melinda Duncan, professor of biological sciences, now serve as associate directors for this COBRE.

“A lot of the effort for all of this comes in the details — people finding mentors, pairing people with the right person to help them get their initial papers,” he said.

Fox expressed special thanks for the efforts of Dawn Yasik, COBRE administrative coordinator, and Katie Brown, contract and grant specialist, as grant materials were prepared and submitted.

Prof. Joseph Fox received his bachelor’s degree from Princeton University and his doctorate from Columbia University. He did postdoctoral work as an NIH Fellow at MIT and joined the UD faculty in 2001. He has built a multidisciplinary program that centers on the development of new types of chemical reactions.

Supported by the National Institutes of Health, Centers of Biomedical Research Excellence (COBRE) grants are aimed at expanding and developing institutional biomedical research capacity by enhancing research infrastructure and developing a critical mass of investigators with shared scientific interests.

Chemical$11 MILLION FROM NIH FOR RESEARCH