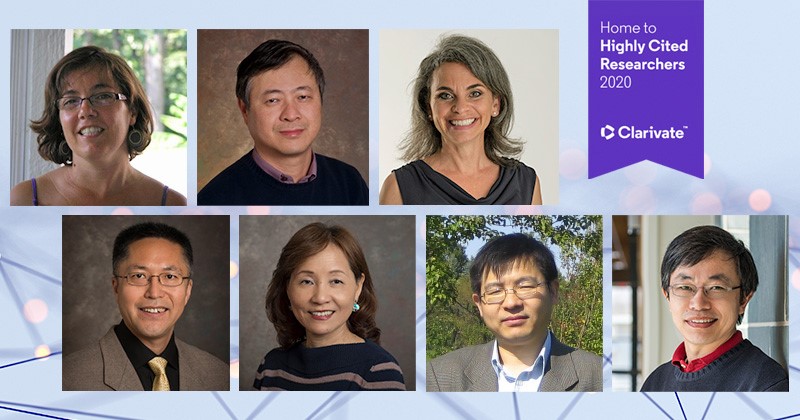 Seven University of Delaware professors have been named to the 2020 Highly Cited Researchers list from Clarivate, the global analytics company.

The annual list identifies researchers who have demonstrated significant influence in their academic field or across several fields through the publication of multiple highly cited papers during the last decade. Their names are drawn from the publications that rank in the top 1% by citations for field and publication year in Clarivate’s Web of Science citation index.

David Pendlebury, senior citation analyst at the Institute for Scientific Information at Clarivate, said, “In the race for knowledge, it is human capital that is fundamental, and this list identifies and celebrates exceptional individual researchers at the University of Delaware who are having a great impact on the research community as measured by the rate at which their work is being cited by others.”

Wu, Arighi and Huang were recognized for their influence in biology and biochemistry, Smith in economics and business, and Wei, Xia and Yan in the “cross-field” category, representing impact across multiple disciplines.

This is the seventh consecutive year that Wu has been named to the elite list. She has conducted bioinformatics data science research for more than 25 years in areas encompassing genomics and proteomics, text mining and natural language processing, semantic knowledge network analysis, machine learning and big data analytics.

When asked what the Highly Cited Researcher recognition means to her, Wu said, “It shows the broad impact of scientific research enabled by team science — and the importance and promise for training a diverse group of next-generation researchers in a multidisciplinary collaborative team environment to address research questions of societal impact.”

Wu’s highest cited publications, and those of her fellow honorees and frequent collaborators Arighi and Huang, relate to the international UniProt Consortium, which Wu cofounded in 2002. It provides the research community with free access to a central hub for studying the universe of all protein sequences, the lineup of amino acids that determine a protein’s 3D structure and function, such as an antibody that binds to the coronavirus (COVID-19). UniPort receives about 6.5 million pageviews from nearly 800,000 unique sites by researchers worldwide on a monthly average.

Wu’s highest cited first-authored paper, with 1,159 citations and counting, is “The Universal Protein Resource (UniProt): An Expanding Universe of Protein Information” published in 2006 in Nucleic Acids Research. She said the all-time highest cited paper she has contributed to, so far, with 3,432 citations and counting, is authored by the UniProt Consortium and is entitled “UniProt: A Hub for Protein Information.” It was published in 2015 in Nucleic Acids Research.

While Wu, Arighi, Huang, Smith and Yan were named to the Highly Cited Researchers list last year, Xia and Wei are newcomers, recognized for the first time.

Xia’s expertise is in wireless communications and signal processing, such as 5G and radar imaging. He has had a paper that’s already been cited over 690 times on invisible watermarking for digital images.

Wei’s research interests and expertise lie in nanomaterials and nanotechnology. His most recent research focuses on nanomaterials that enable energy conversion and storage. His highest cited paper, so far, on the reliability and current carrying capacity of carbon nanotubes has had 849 citations and counting.

“I am glad and greatly honored to be recognized, “Wei said.

More than 6,000 researchers around the globe, in 21 fields of sciences and social sciences, and in cross-field categories, were selected for the 2020 list, based on the number of highly cited papers they produced over an 11-year period from January 2009 to December 2019.

The methodology that determines the “who’s who” of influential researchers draws on the data and analysis performed by bibliometric experts and data scientists at the Institute for Scientific Information at Clarivate.