A LEGACY OF GENEROSITY 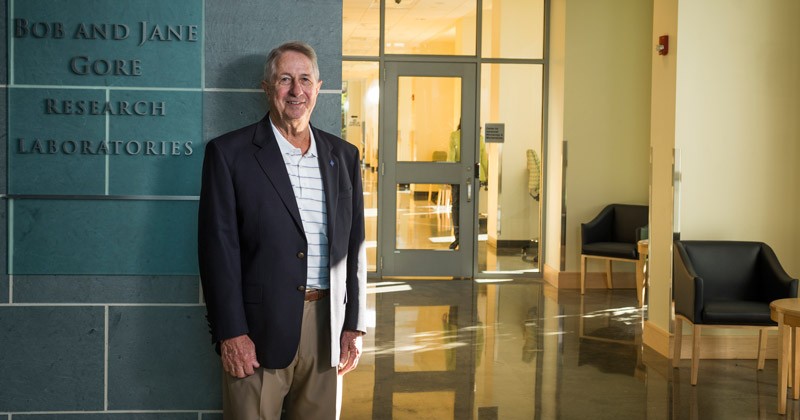 In 1965, Robert W. “Bob” Gore made his first gift to the University of Delaware–$3 to the unrestricted University fund. That humble first gift to his beloved alma mater sparked a lifetime of generosity and philanthropy from Gore and his family, who committed more than $32 million during his lifetime to advance UD’s people and programs.

Gore, proud UD alumnus of the Class of 1959, emeritus member of the University Board of Trustees and chairman emeritus of the board of directors of W. L. Gore & Associates, passed away on Sept. 17. His loss is mourned by the entire University community, but his legacy and lasting philanthropy will continue to have a transformational impact on current and future Blue Hens for years to come.

“Bob’s generosity has truly touched every aspect of the UD community — providing scholarships that ensure our students’ success, funding classrooms and labs where our faculty members teach and conduct ground-breaking research, and supporting the arts that entertain and inspire all of us,” UD President Dennis Assanis said. “He often spoke of his love for UD and how his education set him on a path for professional success and personal fulfillment. I am truly grateful to him for honoring his time at UD by helping so many generations of Blue Hens launch their own journeys of education, exploration and impact in the world.” 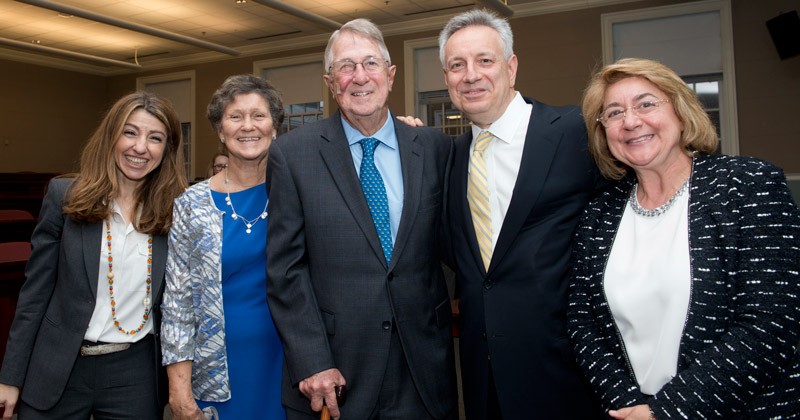 UD President Dennis Assanis and Eleni Assanis chat with Bob and Jane Gore on Feb. 26, 2020, at the inaugural lecture of Marianthi Ierapetritou (left), who is the Bob and Jane Gore Centennial Professor in the Department of Chemical and Biomolecular Engineering.

Students are at the core of a university’s mission. Gore and his family have ensured countless Blue Hens—of today and tomorrow—have resources and opportunities that wouldn’t otherwise be possible.

In 1987, Gore’s mother, Genevieve Gore, established the W.L. Gore Entrepreneurial Scholarship in memory of Bob’s father and her husband, Bill Gore. She wanted to continue the Gore legacy at UD while honoring the qualities her husband exemplified, especially as an outstanding proponent of the entrepreneurial spirit in business. To date, 189 students have benefitted from the scholarship including Ruben Lopez, class of 2021 an accounting major.

“Although I was never blessed with the opportunity to meet Bob in person, the impact he left on me and others at UD will forever be remembered,” Lopez said. “I personally receive school funding through the W. L. Gore Entrepreneurial Scholarship and without the support, I would not be where I am now. As a first-generation college student, the scholarship is what allows me to attend a school as wonderful as UD. I am a graduating senior this year, and have accepted a position in audit for next fall. When I remember the journey I had to get through college I will be reminded of Bob. He gave me an opportunity to discover myself, and for that I will be forever grateful.” 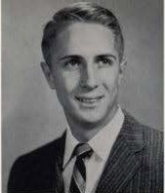 In addition to supporting undergraduate students, Gore also greatly valued graduate education. In 2011, he donated $1 million to establish the Robert W. Gore Fellowship in the College of Engineering. The fellowship is awarded to two academically deserving Ph.D. students in the College of Engineering. Since 2012, 19 graduate students have received this support, including Elise Hoover, a class of 2026 doctorate student studying biomedical engineering.

“Through this fellowship, I have been able to dedicate more time to my program and studies,” said Hoover. “I’m immensely grateful to Dr. Gore for his support because it has alleviated some of the financial stresses that come with graduate school.”

Gore recognized that direct support for students wasn’t the only way to help them succeed. Recruiting and retaining talented faculty has long been a way to ensure attract bright students while also enabling and continuing innovation that marked Gore’s career—advancing research and elevating the University as a whole. 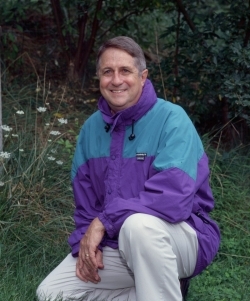 “The support Bob provided for me and my colleagues impacts us as faculty members, our students and the broader University community,” Lee said. “We have been able to use his generosity to not only cultivate interesting and innovative research, but to leverage against federal dollars to create new initiatives, growing the prominence of the University into being a global leader in biopharmaceutical manufacturing. I hope my work continues to be a tribute to Bob’s ingenious thinking and inventive spirit.”

Gore and his wife Jane’s support to recruit talented faculty continued when they committed $3 million to establish the Bob and Jane Gore Centennial Chair of Chemical and Biomolecular Engineering in 2014, in celebration of the department’s 100 year anniversary. The named position attracted Marianthi Ierapetritou, who was the Distinguished Professor of Chemical and Biochemical Engineering at Rutgers University. She began her tenure at UD last September and gave her inaugural lecture, called “Process Systems Engineering in the Era of Big-data and Industry 4.0 Revolution,” in February 2020.

“I have been working in the area of pharmaceutical engineering for the last 10 years, mainly on the small molecules, but in the last five years I’ve been exploring more in the area of biologics production and manufacturing,” Ierapetritou said. “I was thrilled I had the opportunity to meet Bob at the inaugural lecture and speak with him in person about my research, which his and Jane’s support enabled me to bring to UD. Now, I can help Blue Hens pursue hands-on learning and also have the opportunity to help women in my classes through the different stages of their science careers. I am thankful the Gores ensured I could be part of this wonderful Blue Hen family.”

With much of his support for students and faculty falling under the College of Engineering, deans and department chairs have surely felt the impact of Gore’s giving throughout the years.

Babatunde A. Ogunnaike, dean of the College of Engineering from 2013 to 2018 and William L. Friend Chaired Professor, witnessed the profound impact of Gore’s philanthropy firsthand.

“The Gores have so generously invested in the faculty and students in the College of Engineering—positively changing the trajectory of the college, its people and programs,” Ogunnaike said. “We have lost a truly irreplaceable friend and a pillar of the community at UD, in the College of Engineering and in the chemical and biomedical engineering department, but his legacy lives on in the countless lives he has touched with his generosity, and in the outsized footprints he left on the sands of time.”

The way students learn is undeniably tied to where they learn. The innovative facilities made by possible by Gore’s generosity ensure Blue Hens will always have collaborative spaces conducive to learning and succeeding. 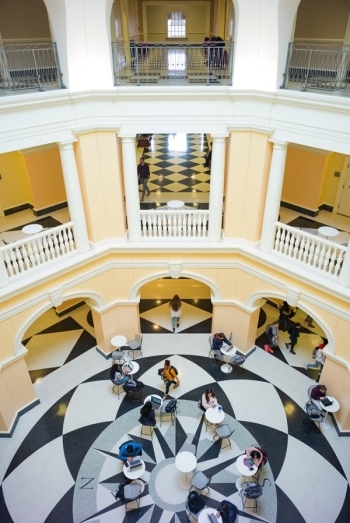 The atrium of Gore Hall, a general classroom building on The Green that was financed by an $18.5 million gift from the Gore famliy

In the mid-1990s, Gore and his family began their impactful support of UD facilities. After a conversation with then-President David Roselle about the need for more general purpose classroom space on the campus, Gore agreed to contribute $15 million for such a building to fill the last empty space on the north Green. When the project cost climbed to $18.5 million, Gore was unwavering in his support; he was adamant that it should mirror the classic Georgian style of its neighboring buildings on The Green.

The result was Gore Hall, the first new building on The Green in more than 35 years, completing a design plan originally approved by the Board of Trustees in 1915. The new building, designed by noted architect Allan Greenberg, created a home to 25 high-tech classrooms and the Center for Teaching & Assessment of Learning. It also solidified the family’s legacy as part of the beauty of The Green.

“Much of Bob’s generosity was focused on the College of Engineering, but his interests also extended across the entire campus,” said Dr. David Roselle, UD president from 1989 to 2007. “When the Center for the Arts was built in 2005, he donated $1 million to fund the Genevieve W. Gore Recital Hall in his mother’s memory. She was an avid supporter of the arts and this space is a fitting tribute to her and her love of the arts, providing a beautiful venue for events and performances that enrich students, faculty and the greater community. Throughout my presidency at the University, Bob was a trusted advisor, dedicated philanthropist and a true example of a successful Blue Hen who remembers where his journey of success began. Students and faculty across disciplines continue to benefit from his love for UD and his generous spirit.”

When the University announced it was building its first major laboratory in 20 years – now the Harker Interdisciplinary Science and Engineering Laboratory (ISE Lab) – Gore and his wife, Jane, were among the first to step up, committing $10 million to create the research wing of the state-of-the-art facility, now named the Bob and Jane Gore Research Laboratories.

The labs house core research facilities and equipment, including an imaging and microscopy suite, a nanofabrication facility and a materials characterization lab. This section of the building also is home to three of the University’s key research centers—the UD Energy Institute, the Delaware Environmental Institute and the Catalysis Center for Energy Innovation. 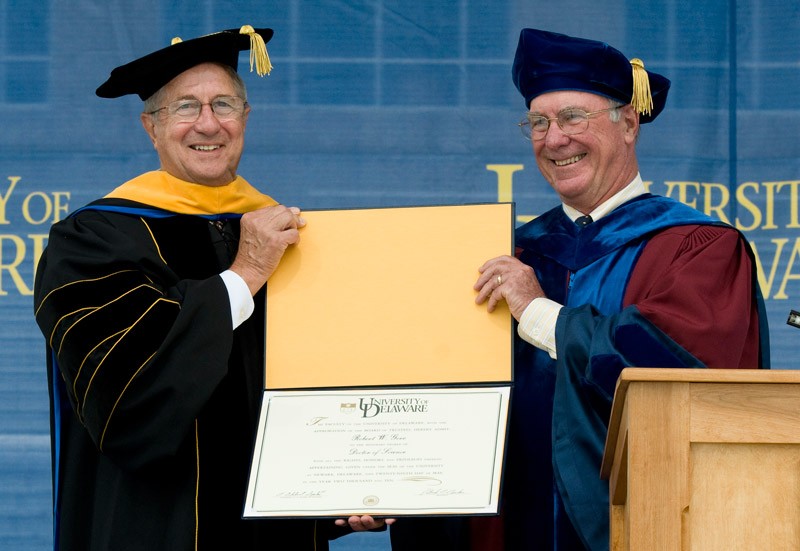 At Commencement in 2010, Bob Gore is awarded an honorary doctor of science degree by then-Board of Trustees Chairman Gil Sparks.

“The entire UD community was and is still grateful to Bob and Jane for this landmark gift,” said Dr. Patrick Harker, UD president from 2007 to 2015. “It was always clear that Bob truly understood the types of facilities, programs and opportunities that would stimulate the same kind of cross-disciplinary, problem-based approach to learning and invention that’s been so integral to his own legendary success. Through his profoundly generous giving, Bob invested in the future discoveries of every researcher, faculty member and student who utilize the facilities and programs he supported over the years.”

In addition to investing in students, faculty and key spaces on campus, Gore also supported the 1994 renovation of Colburn Lab and the University of Delaware Research Foundation.

In honor of their tremendous philanthropy that changed the landscape of UD—both physically and through impact on Blue Hens—Gore and his wife Jane were named inaugural members of UD’s Founders Society in October 2018. The Society recognizes the University’s most generous donors who have committed $1 million or more during their lifetime.

But the true tribute to their generosity is in the success of those impacted throughout the years.

“While the Gore name adorns many a campus building, lab, walkway and space, the true impact of the generosity of Bob and his family comes when a named professor makes a breakthrough discovery or a scholarship recipient reaches a professional milestone,” Assanis said. “Though Bob has passed, he lives on through the successful students, the top faculty and the outstanding programs tied to his legacy of generosity at UD. We will all be forever grateful.”

1959: Senior year at UD and graduation

1991: Becomes a member of the 150th Campaign Committee

1992: Recognized as a member of the UDAA Wall of Fame

1995: Commits $18.5 million to Gore Hall on The Green; elected to the National Academy of Engineering for his technical achievements

1997: Serves as co-chair for the Campaign Steering Committee until 2003

2005: Commits $1 million to supporting the Roselle Center for the Arts; receives the Perkins Medal

2006: Inducted into the U.S. National Inventors Hall of Fame; begins serving on the College of Engineering Advisory Council– College and Program Advisory Board

2011: Commits $1 million to establish the Robert W. Gore Fellowship in the College of Engineering

2013: Commits $10 million to build the University of Delaware’s ISE Lab

2014: Commits $3 million to establish the Bob and Jane Gore Centennial Chair of Chemical and Biomolecular Engineering

2017: Becomes an emeritus member of the Engineering College Advisory Council – College and Program Advisory Board until 2019

2018: Recognized, along with wife Jane, as members of the Founders Society

2019: Recognized as part of the UDAA Alumni Circle unveiling