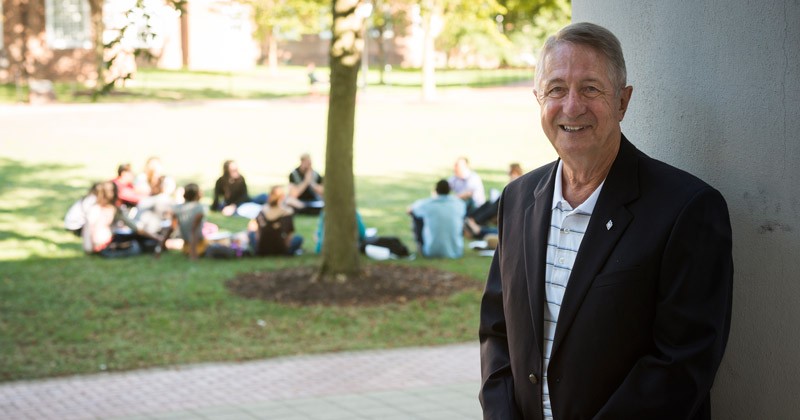 Robert W. Gore, outside Gore Hall during at 2013 visit to campus.

University of Delaware alumnus and benefactor Robert W. “Bob” Gore, chairman emeritus of the board of directors of W. L. Gore & Associates, died on Sept. 17 at the age of 83.

“A brilliant scientist, a creative inventor, a relentless innovator, a generous benefactor — Bob Gore was all of these things and so much more throughout his life,” said UD President Dennis Assanis. “Most of all, he was a true friend to the University of Delaware and everyone who had the pleasure of knowing him. Generations of UD students and faculty — past, present and future — owe a debt of gratitude to Dr. Gore and his family for their commitment to our institution. Though we are saddened by his passing, we are so deeply grateful for his enduring legacy of philanthropy and engagement with UD.”

Dr. Gore was an internationally renowned inventor and member of the National Academy of Engineering and National Inventors Hall of Fame. In 1969, while working at W.L. Gore and Associates, a company founded by his parents, Dr. Gore developed a new polymer, expanded polytetrafluoroethylene (PTFE), which led to new product applications including Gore-Tex fabric, the world’s first breathable waterproof fabric. Dr. Gore held nine patents, and his inventions led to materials used in products found in spacesuits, medical devices and more.

At the University of Delaware, Dr. Gore served on the Board of Trustees from 1992-2010 and was vice chairman from 1999-2007. When he retired from the board in 2010, he was named trustee emeritus–one of only four UD trustees to ever receive this distinction. Dr. Gore was also a past member of the Board of Directors of the University of Delaware Research Foundation and Chemical and Biomolecular Engineering Advisory Council.

At the University’s Commencement ceremony in 2010, Dr. Gore was awarded an honorary doctor of science degree. The citation, read by then-Board Chairman Gil Sparks, called him a “creative business leader” and “munificent benefactor,” noting, “You have helped to nurture a company from infancy to maturity and brought to market valuable new technology and new products that have enhanced and even saved lives. We are especially proud because you are one of our own, a Blue Hen through and through.”

“Bob’s passing is a loss to the UD community,” said John Cochran, chair of the UD Board of Trustees. “For decades, Bob used his expertise, generosity, innovative thinking and leadership to help shape this University, impacting generations of Blue Hens through his personal philanthropy as well as his thoughtful counsel to UD presidents. He will be missed by many, but his transformative legacy will leave an indelible mark on the University which will enable success for students and faculty for years to come.”

For decades, Dr. Gore was a generous benefactor to UD, an institution he called “the springboard for my career.”

Dr. Gore was born on April 15, 1937, in Salt Lake City, Utah. His family moved to Newark, Delaware, and he graduated from Newark High School before enrolling in the University of Delaware to study chemical engineering.

At UD, he played the trombone in the Marching Band and was a member of UD’s chapter of the American Institute of Chemical Engineers (AIChE); Alpha Tau Omega fraternity; Alpha Chi Sigma, a professional chemistry fraternity; and Tau Beta Pi, an honor society for undergraduate engineering students.

During his sophomore year at UD, Dr. Gore suggested to his father, engineer Bill Gore, an idea for an innovative multiconductor wiring strip. This provided a key solution to a manufacturing problem and earned Dr. Gore his first patent.

Dr. Gore graduated from UD in 1959 with a bachelor’s degree in chemical engineering and then went on to the University of Minnesota for a doctoral degree.

He was named to the W.L. Gore & Associates board of directors in 1961, and two years later joined the family firm as an employee. His research shaped the company’s future, and he later served as president of the company (from 1976 to 2000) and chairman of its board of directors. He became chairman emeritus in 2018 after 57 years of service on the board of W.L. Gore & Associates, with 30 of those years spent as chairman.

During Dr. Gore’s time as president, W.L. Gore & Associates became a billion-dollar company. It is now a $3.2 billion company with more than 11,000 employees and offices in more than 25 countries.

The company has more than 3,400 unique inventions worldwide in a wide range of fields, including electronics, medical devices and polymer processing.

“Bob was a true pioneer that influenced the lives of so many. He was a thought leader in the industry and instrumental to the creation of a multitude of innovative products that have had a significant impact on society,” said Terri Kelly, ENG83, retired president and CEO of W.L. Gore & Associates. “On a personal note, I am truly grateful for his years of mentorship and support that he provided to me throughout my career. Bob was known for his sharp mind, deep technical expertise and creative approach. He would always ask some of the most insightful questions that helped me grow as a leader. His guidance, encouragement and the opportunities he gave me, helped me achieve more than I thought possible. I am honored to have known him, and he will clearly be missed.”

Dr. Gore’s impact on industry was well recognized. In 2005, he received the Perkin Medal from the Society of Chemical Industry. This is considered the highest honor given in American industrial chemistry.

“Bob was a gifted engineer whose clever inventions touched countless lives, from astronauts protected by space suits with Gore fibers to everyday people who exercise wearing breathable Gore-Tex gear,” said Levi Thompson, Dean of the College of Engineering. “More importantly, Bob was a wonderful and generous person. It is truly an honor to count Bob among our alumni, and we are grateful for his unwavering support of UD engineering. We will continue to be inspired by his legacy of innovation and service, and we will train our students to be the kind of engineers that he was.”
Dr. Gore, his wife, Jane, and their family have supported numerous priorities and initiatives at the University.

In 1987, Dr. Gore established the W.L. Gore Entrepreneurial Scholarship, which 189 students have benefited from to date.

In the 1990s, Dr. Gore and his family generously contributed $18.5 million to finance the construction of Gore Hall, a general classroom building that was the first new building on the University’s north Green in more than 35 years. In 2005 he donated $1 million in his mother’s memory to fund the Genevieve W. Gore Recital Hall in the Roselle Center for the Arts.

In late 2011, Dr. Gore donated $1 million to establish the Robert W. Gore Fellowship in the College of Engineering. Since 2012, 19 graduate students have received support through this fellowship.

He and his wife, Jane, made a commitment of $10 million to benefit UD’s Harker Interdisciplinary Science and Engineering Laboratory (ISE Lab). In recognition of that generosity, the research wing of the state-of-the-art facility was named the Bob and Jane Gore Research Laboratories.

Bob and Jane Gore were named as inaugural members of UD’s Founders Society in October 2018 in recognition of their philanthropic commitments.