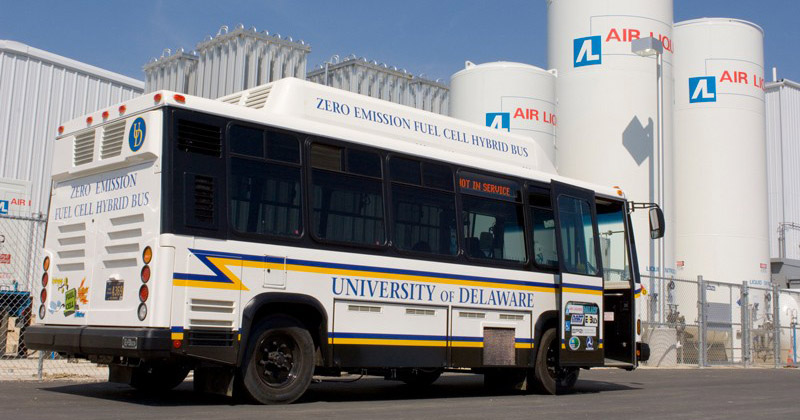 Renewable technologies are a promising solution for addressing global energy needs in a sustainable way.

However, widespread adoption of renewable energy resources from solar, wind, biomass and more have lagged, in part because they are difficult to store and transport.

As the search for materials to efficiently address these storage and transport needs continues, University of Delaware researchers from the Catalysis Center for Energy Innovation (CCEI) report new techniques for characterizing complex materials with the potential to overcome these challenges.

The researchers recently reported their technique in Nature Communications.

Seeing the parts, as well as the whole UD doctoral candidate Josh Lansford is the lead author of a paper in Nature Communications describing a new technique for characterizing complex materials.

UD doctoral candidate and 2019-2020 Blue Waters Graduate Fellow Josh Lansford and Dion Vlachos, who directs both CCEI and the Delaware Energy Institute and is the Allan and Myra Ferguson Professor of Chemical and Biomolecular Engineering, have developed a method to observe the local surface structure of atomic-scale particles in detail while simultaneously keeping the entire system in view.

The approach, which leverages machine learning, data science techniques and models grounded in physics, enables the researchers to visualize the actual three-dimensional structure of a material they are interested in up close, but also in context. This means they can study specific particles on the material’s surface, but also watch how the particle’s structure evolves — over time — in the presence of other molecules and under different conditions, such as temperature and pressure.

Put to use, the research team’s technique will help engineers and scientists identify materials that can improve storage technologies, such as fuel cells and batteries, which power our lives. Such improvements are necessary to help these important technologies reach their full potential and become more widespread.

“In order to optimize electrochemical storage technologies, such as fuel cells and batteries, we must understand how they work and what they look like,” said Lansford, the paper’s lead author, who is advised at UD by Vlachos, the project’s principal investigator.

“We need to understand the structure of the materials we are generating, in detail, so that we can recreate them efficiently at a large scale or modify them to alter their stability.”

Lansford concedes that it is too costly and time-consuming to model complex structures directly. Instead, they take data, generated from a single spot on the surface of a material, and scale it to be representative for a variety of catalysts on many surfaces of many different materials.

Imagine a cube made up of many atoms. The atoms located on the corners of the cube will have different properties than, say, the atoms located on one side of the cube. This is because on the corners, fewer atoms will be connected to each other and atoms may be spaced closer together. While on the side of the cube, more atoms will be connected even though they may be spaced farther apart from each other. Josh Lansford and other scientists say widespread adoption of renewable energy resources from solar, wind, biomass and more have lagged, in part because they are difficult to store and transport.

The same is true for catalyst materials. Even if we can’t see them with the naked eye, the particles that make up a catalyst are adsorbed onto many different sites on the material — and these sites have different edges, bumps and other variations that affect how materials located there will behave. Because of these differences, scientists can’t just use a single number to try to quantify what’s happening across a material’s entire surface, so they have to estimate what these surfaces look like.

According to Lansford, this is where computational modeling can help.

The research team used experimental measurements of different wavelengths of infrared light and machine learning to predict and describe the chemical and physical properties of different surfaces of materials. The models were trained entirely on mathematically generated data, allowing them to visualize many different options under many different conditions.

They developed special open-source software to apply the technique on different metals, materials and adsorbates. The methodology is flexible enough to be used with other spectroscopic techniques beyond infrared light, so that other scientists and engineers can modify the software to advance their own work.

“This work introduces an entirely new way of thinking on how to bridge the gap between real-world materials and well-defined model systems, with contributions to surface science and machine learning that stand on their own,” said Lansford.