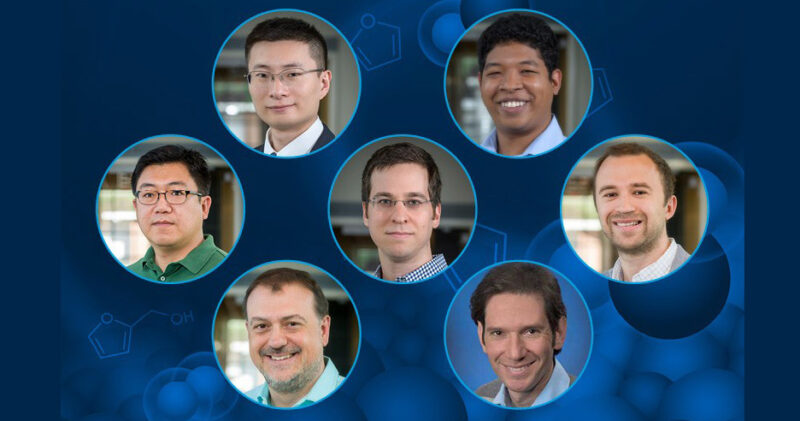 Atomic-scale catalysts may pave the way for converting biomass to fuels, chemicals

University of Delaware researchers from the Catalysis Center for Energy Innovation (CCEI) and collaborators at the U.S. Department of Energy’s Brookhaven National Laboratory have developed a new class of catalysts for converting agricultural biomass, such as plant waste, into valuable fuels and chemicals.

CCEI is a multi-institutional Energy Frontier Research Center, housed at UD and funded by the Department of Energy. Catalysts are materials that accelerate chemical reactions.

The scientists have designed a catalyst composed of single platinum atoms and clusters smaller than billionths of a meter on the surface of a metal oxide called titanium dioxide. Titanium dioxide is the white pigment used in sunscreen, paints and cosmetics. The metal oxide is a stable and inexpensive material.

The researchers have reported promising results in Nature Catalysis demonstrating that, by working at the single-atom scale, scientists can selectively control the chemical reactions required to convert a plant derivative called furfuryl alcohol into a potential biofuel, known as 2-methylfuran.

This same approach has been a challenge using metal catalysts at larger scales.

Biomass is a renewable resource that offers an alternative to fossil-fuels for creating high-performance chemicals, fuels and other products, such as plastics.

However, typical biomass feedstocks contain many molecular parts. This includes groups of oxygen, hydrogen and carbon atoms that are bound together into what are known as functional groups.

While researchers need some functional groups to create new materials, there are other oxygen-containing groups of atoms they don’t want. Until now, selectively removing these unwanted groups, a process called hydrodeoxygenation, has been problematic.

“The catalyst we have developed enables us to keep the groups of atoms that are useful in developing renewable fuels and plastics, while removing undesired oxygen-containing portions in an environmentally friendly way,” said Jiayi Fu, a co-first author on the paper and UD doctoral candidate at CCEI.

The strategy could be applied to design stable, active and selective catalysts based on a wide range of metals supported on metal oxides. This would allow researchers to produce industrially useful chemicals and fuels from biomass-derived molecules.

The research team theorized that by reducing the size of the platinum to one atom or a few atoms clustered together, it would weaken the interaction between the catalyst and a ring-shaped part of the molecules to prevent some of the unwanted byproducts.

CCEI researchers used computer modeling studies to demonstrate that it was feasible to drive the desired reaction using the unique properties of single platinum atoms on titanium oxide. Promising results prompted the UD research team to synthesize the catalyst, characterize its structure and prove the concept in the lab. Collaborations with colleagues at Brookhaven National Laboratory, Argonne National Laboratory and industry collaborator Bruker then enabled the research team to verify the catalyst’s exact atomic-scale structure and electronic properties.

“For a molecule to generate a particular product, the reaction has to be directed along a certain pathway because many side reactions that are not selective for the desired product are possible,” said co-author Anibal Boscoboinik, a chemist in the Center for Functional Nanomaterials (CFN) Interface Science and Catalysis Group at Brookhaven National Laboratory.

To date, the collaborative research team has shown that this process works with catalysts made from platinum and titanium oxide, but Fu is quick to point out that there are many other noble metals and oxides. CCEI researchers are currently investigating other possible combinations of catalysts, particularly those that would allow them to achieve better results at reduced cost.

The research team also is investigating ways to increase the stability of the platinum atoms on the surface of the catalyst, in hopes of creating technologies that could be scaled up and deployed.

Jiayi Fu is a UD doctoral candidate in chemical engineering with an interest in using catalysis to convert biomass into usable fuels and chemicals. Fu, along with fellow doctoral student Jonathan Lym and Weiqing Zheng, lab manager for the Delaware Energy Institute, served as co-first authors on the paper. CCEI director Dion Vlachos served as the principal investigator on the project. UD co-authors include CCEI postdoctoral researchers Konstantinos Alexopoulos and Alexander V. Mironenko.

Funding for this work is provided by the U.S. Department of Energy’s Office of Basic Energy Sciences under award# DESC0001004.