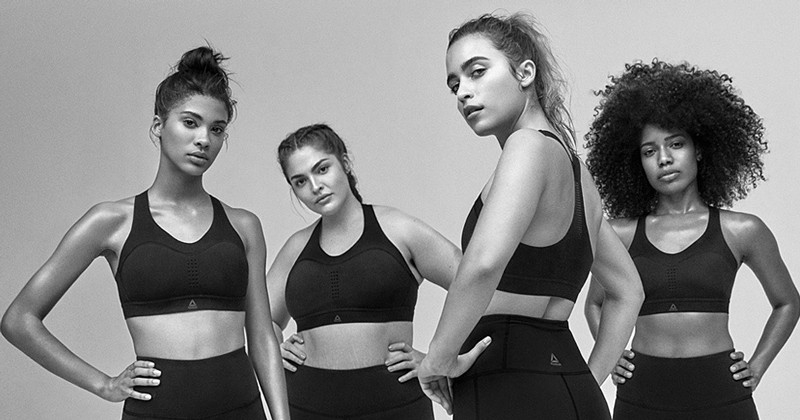 Editor’s note: The following story was part of a series of conversations in the UD Research Magazine. The theme was UD Disruptors, and Prof. Norm Wagner was a leader in a group that designed a better sports bra for Reebok, using sophisticated materials science technology that he and colleagues have used in spacesuits for NASA. As a research university on the leading edge, UD has a multitude of creative thinkers and doers.

It is well established that amazing things sometimes happen in laboratories and other research spaces. But no one ever predicted that a University of Delaware collaboration could accomplish what many believed was just plain impossible.

It helped to produce a “smart” sports bra—a sports bra engineered to actually do its job.

If you read that last sentence out loud and a female nearby hears it and snorts coffee out of her nose, please understand. It really is that unbelievable. Women throughout the millennia have endured the discomfort of garments that either gave poor support or relied on extreme compression to control breast movement during exercise.

Some trace the genesis of the sports bra to an exasperated soul who sewed two jock straps together and tried to make it work.

This is nothing like that. The bra in question, the one developed with UD scientists and engineers, is Reebok’s PureMove bra and it is on Time magazine’s list of the 50 Best Inventions of 2018 and Popular Science’s list of the 100 Greatest Innovations of 2018.

No such thing was ever on the radar screen when UD Professor Norm Wagner and UD alum Eric Wetzel invented shear thickening fluid (STF). It was not in the business plan five years ago when Wagner and UD alum Rich Dombrowski started their business, STF Technologies, to put the almost-magical substance on the market either.

This stuff—which gets stronger when under pressure—was designed for body armor, puncture resistance and protective purposes.

“If you had said that the first product launched using this technology was going to be a sports bra, I don’t know that I would have believed you,” Dombrowski said.

But you just never know where discoveries might lead. This one somehow found its way to Danielle Witek, who was then a senior innovation apparel designer for Reebok, the global athletic footwear and apparel company. She came across it in a science journal she reads.

According to Reebok, half of the women who exercise experience breast pain, and 70% are wearing the wrong size garment. One in five women says this problem is an obstacle to regular exercise for them.

Witek wanted to see if science and engineering might have a clue.

Enter shear thickening fluid. It is made of tiny particles, suspended in liquid. When that liquid is hit with sudden pressure or impact, the particles instantly connect, forming strong, solid layers. Later, as the energy from the impact dissipates, the particles move back into suspension as a liquid.

NASA finds those unique properties attractive for the protection of astronauts and has two contracts with STF Technologies. Test fabrics infused with STF are flying outside the International Space Station now. The Department of Defense and law enforcement agencies are interested, too. Kevlar infused with STF is far stronger than plain Kevlar.

Witek wondered what else it might do. Would it strengthen and flex in a soft-fabric garment made for female athletes? She called UD.

“I cold-called them,” she said. “Could this be integrated into a soft performance fabric? I thought they’d think I was crazy, but they gave it good thought.”

Wagner, Unidel Robert L. Pigford Chair in Chemical and Biomolecular Engineering and a faculty member in UD’s Biomechanics and Movement Science graduate program, was intrigued when the question came to him.

But he could not answer without data.

“It’s one thing to say it must provide support,” Wagner said. “It’s another thing to say it is in motion at this speed. What are the engineering and science issues around soft tissue motion? What did we have to create? Engineers need numbers and material properties. This is new measurement science. And we really didn’t know what was needed.”

He called on the biomechanics expertise of Jim Richards, distinguished professor in the Department of Kinesiology and Applied Physiology in UD’s College of Health Sciences.

Richards and department colleague Elisa Arch have extensive expertise in the study of human motion—the way bones and rigid parts of the body work and interact during activity. Richards is a sought-out adviser with competitive skaters, many of Olympic caliber, who come to him to have the biomechanics of their jumps evaluated.

He uses an array of cameras and reflective markers to track motion and uses computer modeling to analyze the data.

“The level of expertise we have here is world-class,” Wagner said. “They were a critical part of this whole thing. You’ve got to have good people to work with—and boy, are they good people.”

This study of soft tissue was new territory, though. Richards and Arch developed a new biomechanics testing process, placing 56 markers on sports bras of many kinds to track how the fabric responded to the motion of humans of varying sizes.

“Typically in biomechanics we are trying to ignore soft tissue and capture the motion of rigid segments,” Arch said. “This was a new adventure for us…. Fifty-six markers is quite a lot of markers in a relatively small region, but we wanted to capture how all the soft tissue moves … and we wanted to identify how cyclical motion synced up with gait cycle.”

They recruited females to wear the necessary data-gathering gear and soon delivered unprecedented insights—precise calculations on where, when and how the fabrics in these runners’ bras were moving, stressing and stretching, where support was needed and when.

Graduate students helped with the research and Richards put the data into context.

“He is a wizard with the way the data is represented, providing it in a way that’s easy to digest,” Dombrowski said of Richards. “He wrote custom code and we got a lot of visualization, a lot of video.”

The engineers at STF Technologies then developed a solution to create a fundamentally new “movement reactive fabric” that provided the necessary support.

“Areas where we saw a lot of motion wound up being the focus of design,” Arch said. “And they were able to control that motion much better.”

Finding the right fabric and engineering all of the necessary features were major challenges.

“There are how many thousands of different fabrics out there?” Dombrowski said. “What’s the right Lycra content? Do you want nylon? Polyester? What finishes, what fabric softeners? What weight? What knit construction? It becomes an incredibly huge multivariant problem and you’re just trying to narrow this down into the holy grail.”

Richards and Arch tested the prototypes and reported the results.

“Our testing showed that it had potential,” Dombrowski said. “And once you start putting it on people—that’s when it really clicks. We tested 10-15 competitor products, ran the biomechanics and we had some prototypes that were outperforming everything on the market today.”

That took things to a whole ‘nother level for Reebok. They now had a “smart” sports bra, the $60 PureMove with Motion Sense Technology. It launched in August 2018. On its website, Reebok describes the bra as “an innovation that simply adapts to your movement, like an external skeleton.”

The company made a video documenting the technology.

“We could not be prouder to come to market with a product that breaks down barriers in a category that has dissatisfied customers for far too long, lacking any true technological advancements,” Barbara Ebersberger, Reebok’s vice president of performance apparel, said in a press release. “The release of PureMove marks the first step of a very exciting new era for us.”

The early reviews have been tremendous, Witek said.

“It’s turning out to be the largest apparel launch ever,” she said. “And the response has been overwhelmingly positive—better than we could have expected or hoped for. And we have turned it into a franchise. It’s not a one-off product. We’ll evolve it.”

Plans to extend the styling and sizing are in the works.

Larger sizes are challenging from a physics perspective, Dombrowski said, and garment sizing in general can be an ongoing challenge. Humans are not a one-size-fits-all proposition.

“We did a lot of human-subject testing,” he said. “A medium isn’t a medium isn’t a medium. We would get some results back and think ‘We’re crushing it. Perfect. Great.’ Then we’d have three more mediums and—‘Oh, it really didn’t work for her.’ Then you try to tweak it and get it right for the widest possible variety. You do the best you can to find a happy medium.”

A writer for Fast Company—Elizabeth Segran, who covers fashion and aerospace—tested a prototype and wrote that the best thing about it was that she didn’t notice it at all.

“I didn’t feel stifled when I was just strolling around the gym,” she wrote, “and I didn’t feel like I was unsupported when I was running around. Ultimately, the best bras are the ones you don’t have to think about so you can focus on getting on with your life.”

Wagner credits Reebok’s respect for the science of performance.

“They were interested in doing the engineering science,” Wagner said, “and that is the culture in that company. They distinguish themselves by product engineering based on solid biomechanics data and state-of-the-art engineered materials to address a critical problem in women’s exercise health.”

And when they looked for answers, they found strong partners at UD.

“The University of Delaware and Rich and Norm and STF have been incredible, incredible partners,” Witek said. “I always say there weren’t any egos brought to the table. Everybody was honest about what they knew and what they didn’t know, laid that all out on the table and reached out for help when we felt we needed it…. And to get such a strong positive response from the consumers is really exciting.”

For Wagner, it is all the more evidence of the power of diversity, collaboration and real partnership.

“This is a partnership between a small business, a university and a major industry—and it works,” Wagner said. “It’s possible to take intellectual property and turn it into a meaningful, societally relevant product, not just a gizmo but something that addresses a real issue that has been overlooked in women’s health.”