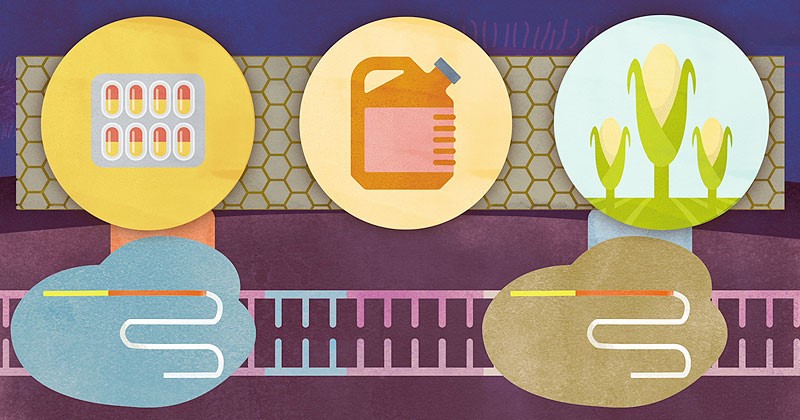 In a classic episode of an old-school TV comedy called I Love Lucy, we see Lucille Ball stepping into an assembly line job at a candy factory. As the pace of the conveyor belt exceeds her ability to wrap the candy, the frenzy gets the best of her. She shoves candy into her pockets, into her hat, into her mouth — it’s a job fail.

As we know, faster doesn’t always mean better. And precision can take a big bite out of speed.

Sometimes, though, innovative minds come up with a new strategy that improves both efficiency and precision.

That’s what two University of Delaware researchers have done in a two-year collaboration, aiming to improve a much different kind of assembly-line process that could be helpful in producing such things as pharmaceuticals and biofuels.

Wilfred Chen, the Gore Professor of Chemical Engineering, and Emily Berckman, a doctoral student in the Department of Chemistry and Biochemistry, have published their new method in Chemical Communications, a journal of the Royal Society of Chemistry. University of Delaware doctoral student Emily Berckman (left) and Prof. Wilfred Chen have found a new way to use CRISPR technology that will help chemists, biochemists and engineers working on such things as pharmaceuticals and biofuels.

The collaboration was expedited by the Chemistry Biology Interface Program, which is sponsored by the National Institutes of Health and helps doctoral students navigate concepts and methods from both the chemical and biological sciences. Funding also came from the National Science Foundation.

The goal of their work was to engineer a more efficient method of producing certain biochemical reactions in cells — specifically, the way enzymes work together to promote those changes in the cells.

“Imagine that you want to pass a product along to the next person,” Chen said. “But you are so far apart that it’s hard to pass it on. If you reduce the distance between the different partners, you get better efficiency and accuracy and you reduce competition.”

In nature, enzymes often gather in groups to do this collaborative work in closer proximity, using protein-based scaffolds as their gathering place and producing a “cascade” of biochemical reactions that way.

Chen and Berckman have found an improved way to control the construction and placement of those scaffolds, as well as the cascade of reactions they produce, using the revolutionary new genetic technology known as CRISPR/Cas9.

CRISPR is an acronym (clustered, regularly interspaced palindromic repeats) that describes DNA sequences used in the immune system of certain bacterial cells. When the bacterial cell is attacked by a virus, it clips off a bit of the virus’s DNA and stores it, using that information to recognize and destroy the attacker the next time it comes around.

The process includes a protein called Cas9, which binds itself to the targeted segment of DNA and cuts it at that spot. Geneticists are now able to use that process to edit the genetic code to remove mutations that cause disease or other dysfunction. Chen and Berckman aren’t editing genetic code with CRISPR. They are using a modified form of Cas9, called dCas9, which does not have that scissor-like ability but does act as a “super binder.” It holds fast to any targeted DNA sequence and allows for precise placement of these enzyme scaffolds and their cascade of reactions.

Chen already has used dCas9 for gene regulation and imaging applications. This is a new application.

Guided in its work by RNA, the technique allows for an increased number of fusion points and a necessary unlocking mechanism called “toehold gRNA,” increasing both precision, efficiency and predictability.

“We’ve made a more accurate assembly line,” Berckman said. “We can turn it on, now we have to be able to turn it off. Then, ultimately, you could apply this to as many pathways as you can think of — pharmaceuticals, biofuels, cancer therapies.”