Celebrating the Promise of Neutrons 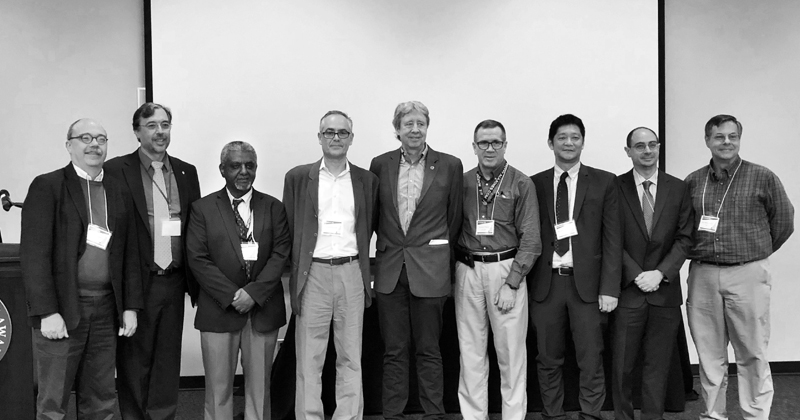 October 30 was Neutron Day this year at the University of Delaware. Why celebrate neutrons? Because these subatomic particles with neutral electrical charge can bring positive benefits to the world. Researchers at the University of Delaware are using neutrons to investigate ways to make new, better products, from super strong building materials to lifesaving medicines.

Over 100 scientists and students from across UD, the National Institute of Standards and Technology (NIST), and nearby local universities and industries gathered in UD’s Clayton Hall for a symposium that included technical presentations, posters, and networking.

Key themes of the meeting included the use of neutron spin echo scattering instrumentation to solve grand challenge problems in soft matter science and biology, as well as the use of neutron scattering more broadly to aid scientists and engineers in their research that is developing advanced medicines, advanced nanocomposite materials, and sustainable energy production.

UD researchers utilize world-class facilities at the NIST Center for Neutron Research (NCNR), which is located just north of Washington, DC. There, scientists use special instruments to examine how neutrons interact with samples of material. For example, in one such instrument known as a neutron spin echo spectrometer (NSE) the neutrons’ spin reveals insights about the motion of the molecules in samples, which helps researchers determine how to modify materials to imbue them with optimal properties.

Through a cooperative agreement with NIST, UD has a Center for Neutron Science to advance the field of neutron scattering. The center, which has a 12-year history of excellence with more than $30 million in funding, is now leading the development of a new world-class neutron spin echo spectrometer for the United States under a $11.8 million grant from the National Science Foundation that began on October 1, 2019.

UD’s Norman Wagner, the Unidel Robert L. Pigford Chair in Chemical and Biomolecular Engineering and director of the Center for Neutron Science, leads the project. “UD is world-leading in the use of this large-scale instrumentation, which is found only at national facilities such as NIST, to both develop a quantitative, molecular understanding of – and develop engineering solutions to – some of the most pressing problems facing humanity,” said Wagner. “As such, our team was selected in a national competition to engineer and build the next generation of this scientific instrument for the benefit of everyone.”

At the sixth Neutron Day, Wagner praised the UD’s commitment to research, scholarship and innovation, which enabled UD to lead this national effort. Dan Neumann, group leader at the NCNR, overviewed the federal government’s plans and commitments for the continued improvement of this scientific resource, along with UD’s important role in this mission.

Charlie Riordan, Vice President for Research, Scholarship and Innovation, noted that UD has a long history of excellence in the study of hard and soft materials and a tradition of seeing scientific discoveries through to their end applications. “At the University of Delaware, we really value collaborations and collaborators,” said Riordan. By combining expertise, researchers can solve the difficult problems ahead. Riordan said he often tells students: “If you want to solve the easy problems, you were born too late for that.

Tessema Guebre, program director at the National Science Foundation with oversight of this scientific project, shared why he was impressed by the proposal written by Wagner and collaborators at NIST and the University of Maryland to build a new neutron spin echo spectrometer.

“It was nicely packaged, excellent science drivers, excellent program for education/training, excellent statements about diversity and broadening participation, it came out really as a complete proposal that we could not ignore,” said Guebre.

For example, Darrin Pochan, Chair of UD’s Department of Materials Science and Engineering, described how he used small-angle neutron scattering experiments to develop bundlemers, new polymer units that could be used to develop unusually strong materials. This research was just recently published in Nature.

Chris Roberts, professor of chemical and biomolecular engineering and associate director of the National Institute for Innovation in Manufacturing Biopharmaceuticals, which is based at UD, discussed uses of neutrons to study protein stability, structural changes and pressure at cold temperatures.

BiomolecularCelebrating the Promise of Neutrons