FROM INSPIRATION TO INNOVATION 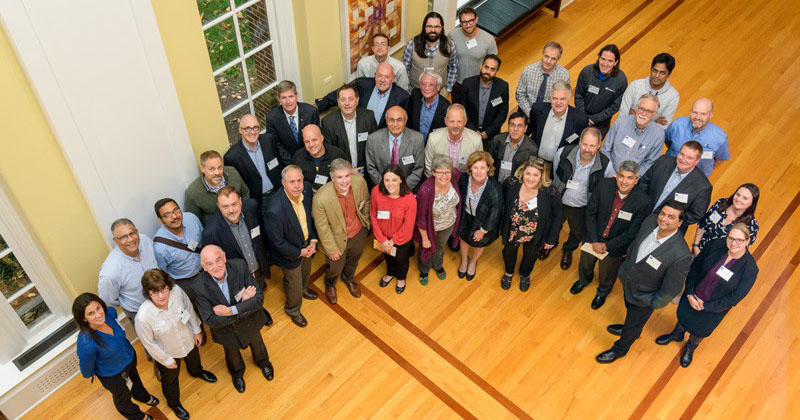 The University of Delaware recently recognized more than 225 inventors for their remarkable contributions to UD and to society at large.

The Merriam-Webster Dictionary defines an inventor as “one who creates or introduces something new.”

Thomas Edison is one. So is Emily Day.

Edison created the incandescent light bulb and the typewriter, among dozens of other things.

Day, an assistant professor in biomedical engineering at the University of Delaware, is working on technology that may one day replace bone marrow transplants by enabling nanoparticle carrier systems to deliver medication and cargo directly to stem cells without the need to remove them from the body.

The University recognized more than 225 inventors, including Day, on Tuesday, Oct. 29, for their remarkable contributions to UD and to society at large. Inventor Emily Day (right), an assistant professor in biomedical engineering, is working on technology that may one day replace bone marrow transplants.

The event, held at the Roselle Center for the Arts and coordinated by the UD Research Office, celebrated researchers with discoveries in engineering, health care, energy, agriculture and many other fields.

“You, our inventors, have taken nuggets of ideas, of discoveries that you’ve made and developed them through hard work, trial and error, failure and success. You’ve shown tenacity and drive, patience and persistence, and the results are what we’re celebrating today,” said UD Provost Robin Morgan.

Enriching the environment for entrepreneurship

Since 2008, UD researchers have generated more than 500 inventions.

Working in collaboration with its partners, the University has made a concerted effort to enrich the environment for these types of efforts in Delaware, contributing to the state’s economic prosperity and positively impacting the greater good.

During this same time frame, UD researchers generated 33 patent applications and secured 11 patents, with the support of the University’s Office of Economic Innovation and Partnerships (OEIP). OEIP has licensed six UD-developed technologies to outside companies and evaluated numerous other potential inventions currently under development.

Several UD-developed technologies are now featured in the Association of University Technology Managers’ Better World Project, which highlights successful examples where academic research and technology transfer combine to benefit the broader world. One of these is the UD-patented microbe UD10-22, a unique strain of Bacillus subtilis that helps plants grow stronger, developed by Harsh Bais, associate professor of plant and soil sciences, and Janine Sherrier, a former UD faculty member. UD licensed the technology to BASF, a global chemical company, in 2013. After completing successful trials and regulatory clearances, the technology is now available in the market as a key component of BASF’s Velondis and Nodulator Duo product lines in Canada and the United States. Trials are ongoing for the product to be available in four additional product lines and for a range of crops to be sold in several countries in South America, Europe and Asia.

“We are building a dynamic and rich ecosystem to support this type of activity, now and in the future,” said Charles G. Riordan, UD vice president for research, scholarship and innovation.

Continued growth of UD’s Science, Technology and Advanced Research (STAR) Campus through strategic partnerships and infrastructure development is one example that firmly positions the University as an innovation powerhouse for the community, state and region. The Delaware Innovation Space, the business incubator that is a public-private partnership between the state of Delaware, DuPont and UD, is another.

Riordan reported that Delaware Innovation Space, with its 130,000 square feet of lab-based tech space for startups, already is 90% occupied, hosting 13 companies — including UD startups W7energy and MCET — along with serving an additional dozen companies through its virtual program. The result — more than 240 jobs created or retained.

Other resources available on campus to support innovators and entrepreneurs include, but are not limited to, OEIP, competitive funding opportunities, seed funding and training programs at UD’s Horn Entrepreneurship, and new and existing core research facilities.

Other UD technologies that have had success in the marketplace during the past year include Avkin, a leading manufacturer of sensor-enabled, high-fidelity, wearable technology for health care simulation education founded by Amy Cowperthwait, director of Healthcare Theatre for the College of Health Sciences. The patented devices are used for training health care workers and caregivers to perform clinical procedures, such as drawing blood, tracheostomy care or catheter insertion. Designed to be worn by a live actor, Avkin products provide a realistic, patient-centered simulation.

Today, the UD-developed products can be found in select medical and nursing schools and health systems. The company now has five products in the market, and recently launched a new package aimed at equipping today’s practitioners with the knowledge and skills necessary to prevent hospital acquired infections and to improve patient outcomes.

Innovation has other ripple effects, too.

Isao Noda, UD affiliated professor in materials science and engineering, said it is particularly important to foster innovation and invention among students. An inventor himself, Noda is named on more than 60 granted U.S. patents.

One of Noda’s inventions is a bio-based plastic made from vegetable oils known as Nodax, which can be used to make eco-friendly products ranging from biodegradable plastic straws to piezoelectric nanofibers for sensors and other electronics. Noda invented the material while a research fellow at Procter and Gamble. Today, UD scientists are part of the exploratory work on Nodax, collaborating on fundamental research to see just what else this novel material can do.

“In industry, invention is required. If you don’t invent, you will be fired. But many graduates get jobs in industry without any of the training on how to invent, so this is amazingly important,” said Noda.

Day agreed and said her approach to innovation shifted in recent years, particularly when speaking with students.

“In the beginning of my academic career I was more focused on publishing papers,” Day said. “As my group has become more established, I now tell my students, ‘Hey, before you go present this or publish, it’s important for you to submit your invention disclosure to protect your ideas.’ ”