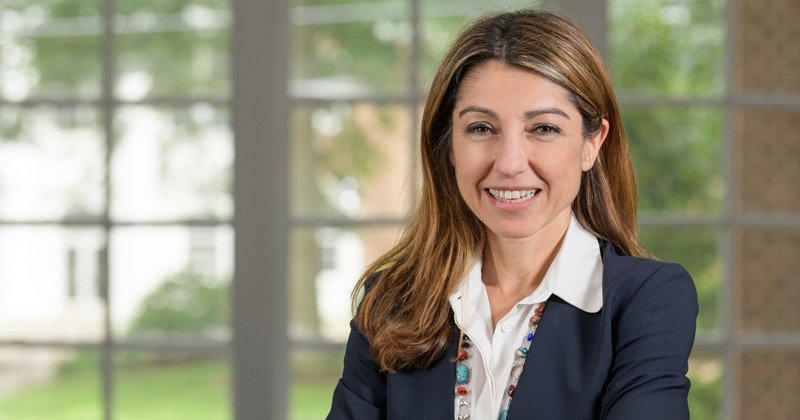 “Dr. Ierapetritou is a highly accomplished researcher, a distinguished scholar and an inspiring mentor, and I am thrilled to welcome her to the University of Delaware,” said UD President Dennis Assanis. “She is an incredible asset to our biopharmaceutical innovation efforts, among other areas. We look forward to everything she will accomplish here at UD, thanks to the philanthropy of Bob and Jane Gore.”

Ierapetritou is a talented and prolific scholar in Process Control and Process Systems Engineering — areas that have significant value across the college and university related to ongoing research in process intensification, biopharmaceutical manufacturing, supply chain management, and sustainable chemistry. In addition to her scholarship, Ierapetritou has served as a departmental leader and role model for young faculty, most recently as the associate vice president for the promotion of women in science, engineering and mathematics.

“Over the past 25 years, Dr. Ierapetritou has risen to the top of the field of chemical engineering,” said Provost Robin Morgan. “She is a member of the board of directors of the American Institute of Chemical Engineers (AIChE), an NSF CAREER Award winner, and the author of hundreds of published scholarly articles. We are pleased to welcome her to UD with this prestigious named professorship.”

The endowed named professorship was made possible by a generous gift from Robert W. Gore, a 1959 graduate and 2010 honorary doctor of science recipient, and his wife Jane. He served as president of W.L. Gore and Associates, Inc., from 1976 until 2000 and was a member of the UD Board of Trustees from 1992 until 2010.

“Jane and I are honored for Dr. Ierapetritou to serve as the Gore Centennial Chair,” Bob Gore said. “Our intention in creating this professorship was to recruit faculty at the top of their field to the University of Delaware and Dr. Ierapetritou is just that — a true leader and engineering scholar. UD’s Chemical and Biomolecular Engineering Department is one of the very top in the country. I know that Dr. Ierapetritou will help to build on the excellence they have already established.”

Ierapetritou’s research centers on process systems engineering, which has applications across scientific disciplines. “For most of my career, I have explored opportunities to contribute to different end applications by providing modeling approaches and exploration optimization frameworks,” she said.

Levi T. Thompson, dean of the College of Engineering and Elizabeth Inez Kelley Professor of Chemical Engineering, said: “We are thrilled to have Marianthi join UD Engineering. She is an outstanding scholar, caring mentor and wonderful person who many of us have known for a number of years. We look forward to her sharing with us her expertise in process systems engineering research and education as we work to design novel, innovative processes that enable the creation of game-changing, lifesaving products and benefit society.”

Her research background fits well with two interdisciplinary research areas that are keystones of UD’s research portfolio: energy and biopharmaceuticals.

In the area of sustainable fuels, Ierapetritou has collaborated with Dionisios Vlachos, the Allan and Myra Ferguson Professor of Chemical and Biomolecular Engineering, Director of the Delaware Energy Institute, and Director of the Catalysis Center for Energy Innovation, based at UD.

“We did a lot of work together the last five years in the area of renewable energy and the catalytic conversion of biomass to chemicals and fuels,” Ierapetritou said, “so I am very interested in exploring further this research direction and actually expanding to include other transformations, including biochemical transformations.”

“I have been working in the area of pharmaceutical engineering for the last 10 years, mainly on the small molecules, but in the last five years I’ve been exploring more in the area of biologics production and manufacturing,” she said.

Ierapetritou is also passionate about helping women in different stages of their scientific careers — undergraduates, graduate students, postdocs and faculty — to identify and understand opportunities to develop and advance. She was associate vice president for Women in Science, Engineering and Mathematics at Rutgers, and earlier, as chair of the Rutgers chemical and biochemical engineering department, she worked to diversify the composition of the faculty and student body.

“I’m certain she will help inspire the next generation of Delaware engineers and scientists who are eager to take on our society’s grand challenges,” said Eric Furst, chair of the Department of Chemical and Biomolecular Engineering.

Ierapetritou received her doctoral degree in 1995 from the Imperial College, London, and completed post-doctoral research at Princeton University. She joined Rutgers in 1998 as an assistant professor and spent 21 years there. “The decision to leave was not an easy one, but what made me attracted to Delaware was mainly the department’s reputation: among the top 10 in the United States and well known worldwide,” she said. “That was an important factor, but when I came and visited, another thing that made me consider it very seriously was the fact that the faculty were very welcoming, warm, open to collaborations and open to research ideas. This energy really made a big difference for me.”

About Bob and Jane Gore

The Bob and Jane Gore Centennial Chair of Chemical and Biomolecular Engineering was established by Robert W. ‘59’10H and Jane Gore. Bob was the Chairman of W.L. Gore Associates, started in 1958 by his parents, W.L. and Genevieve Gore. Bob has served as a Trustee of the University of Delaware and as a past member of the Advisory Committee for the Department of Chemical Engineering. Named UD Trustee Emeritus in 2010, Bob, Jane and their family have also supported numerous priorities and initiatives at the University, including the construction of Gore Hall, the Genevieve W. Gore Recital Hall in the Roselle Center for the Arts, the Robert W. Gore Fellowship in the College of Engineering and the Patrick T. Harker Interdisciplinary Science and Engineering Laboratory. Bob and Jane were named as inaugural members of the Founders Society in October 2018 in recognition of their philanthropic commitments.