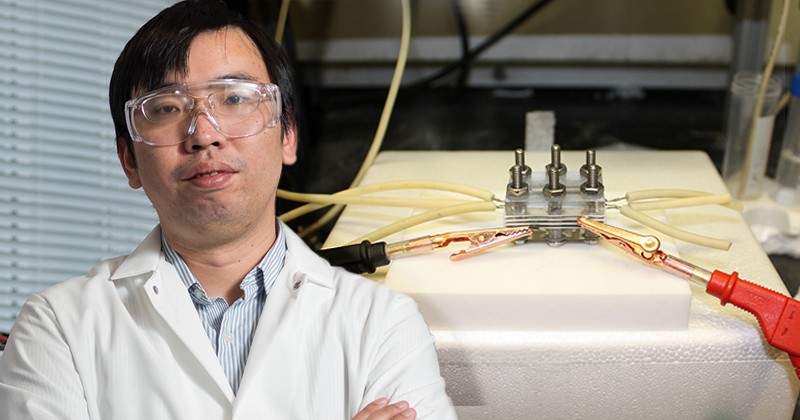 Feng Jiao, an associate professor of chemical and biomolecular engineering at the University of Delaware, is a leader in the field of carbon capture and utilization.

Research creates process that advances the field of carbon utilization

In an effort to develop sustainable solutions to humanity’s energy needs, many scientists are studying carbon capture and utilization — the practice of using excess carbon dioxide in the atmosphere or from point sources, instead of fossil fuels, to synthesize chemicals used to make everyday products, from plastics to fuels to pharmaceuticals.

In the journal Nature Chemistry, Jiao and collaborators from the California Institute of Technology, Nanjing University (China), and Soochow University (China) describe how they formed carbon-nitrogen bonds in an electrochemical carbon monoxide reduction reaction, which led to the production of high-value chemicals called amides. These substances are useful in a variety of industries, including pharmaceuticals.

The team is the first to do this. “Now, starting with carbon dioxide as a carbon source, we can expand to a variety of products,” said Jiao, the associate director for UD’s Center for Catalytic Science and Technology (CCST).

Ingenuity that began at UD

The science behind these findings is electrochemistry, which utilizes electricity to produce chemical change. In previous research efforts, Jiao developed a special silver catalyst, which converts carbon dioxide to carbon monoxide. Next, he wanted to further upgrade carbon monoxide into multi-carbon products useful in the production of fuels, pharmaceuticals and more.

“In the field of electrochemical carbon dioxide conversion, we were stuck with only four major products we can make using this technology: ethylene, ethanol, propanol, and, as we reported just a couple months ago in Nature Catalysis, acetate,” said Jiao.

Nitrogen is the secret ingredient to unlock the potential of the system. The team used an electrochemical flow reactor that is typically fed with carbon dioxide or carbon monoxide, but this time they put in both carbon monoxide and ammonia, a compound that contains nitrogen. The nitrogen source interacts with the copper catalyst at the electrode-electrolyte interface, leading to the formation of carbon-nitrogen (CN) bonds. This process allowed the team to synthesize chemicals that had never before been made in this way, including amides, which can be used in pharmaceutical synthesis. Many pharmaceutical compounds contain nitrogen, and “this actually provides a unique way to build large molecules which contains nitrogen from simple carbon and nitrogen species,” said Jiao.

At a meeting of the American Chemical Society, Jiao shared some of his preliminary findings with William A. Goddard III, principal investigator at the Joint Center for Artificial Photosynthesis at Caltech. Goddard, a world-leading expert who uses Quantum Mechanics to determine reaction mechanism and rates of such electrocatalytic processes, was very excited about this unexpected discovery and immediately set his team.  Tao Cheng in the Goddard lab found that the new carbon-nitrogen bond coupling was an off-shoot of the mechanism that had been determined for the production of ethylene and ethanol, suggesting that Jiao might be able couple bonds other than CN.

“Through a close collaboration with Prof. Goddard, we learned quite a lot in terms of how this carbon-nitrogen bond formed on the surface of the catalyst,” said Jiao. “This gave us important insights on how we can design even better catalysts to facilitate some of these kinds of chemical reactions.”

The implications of this work could be far-ranging.

“This has the significant impact down the road, I think, to partially address carbon dioxide emission issues,” said Jiao. “Now we can actually utilize it as the carbon feedstock to produce high-value chemicals.”