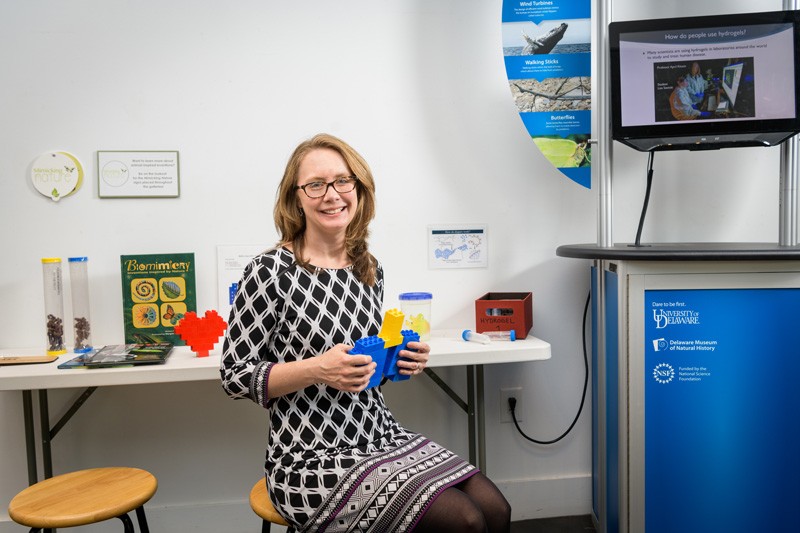 When kids visit the Delaware Museum of Natural History between now and May 12, they can play with and learn from an educational kiosk developed by April Kloxin, an associate professor of chemical and biomolecular engineering and materials science and engineering at the University of Delaware.

The station centers on biomimicry, using nature as inspiration to develop new technology. For example, shark skin has scales that prevent bacteria and algae growth, and scientists create materials with similar properties to prevent bacterial infections in humans. Velcro was inspired by the way seed pods with burrs hook onto animals’ fur to facilitate seed dispersion.

Visitors can hold sealed tubes containing burrs attached to felt, similar to how Velcro attaches to materials. They can build models of the human heart or lungs with Legos to see how synthetic tissues are built from the bottom up. These hands-on activities make learning fun.

“The kids will be playing with the Legos and just having fun, but what they’re actually learning is the concept that you can design tissues,” said Kloxin. “We’re trying to engage all the ways that people learn to bring scientific concepts to them through things that are familiar.”

Helen Bilinski, director of exhibits at the Delaware Museum of Natural History, said Kloxin’s kiosk fits well with the museum’s Design Zone exhibit, on display until May 12. Design Zone shows how science and engineering bring video games, roller coasters, and other kid-friendly technologies to life.

Day after day, she sees children stop, sit down at the activity table, and stay engaged with Kloxin’s lessons for several minutes. “Our goal is to get people excited about nature and about science so that they care about, and can influence, the world they live in and what happens with their future,” said Bilinski.

At the kiosk, kids hear narration by Kloxin, and that’s important, said Bilinski. “We’ve had exhibits in the past with female scientists talking, and I’ve had several parents come up to me and say: We’ve got a daughter, and it’s really important to us that you thought to include a female scientist,” she said.

Since then, Bilinski has made an effort to make female scientists more visible—or audible—at exhibits. Visitors exit this exhibit with a worksheet containing a recipe to make slime at home, and many of the worksheets feature a drawing of a female scientist.

Kids can also visualize how bioinspired materials work. Sealed tubes contain diaper particles soaked with different amounts of water. These materials are hydrogels, materials that absorb as much water as they can. Hydrogels are used by scientists such as Kloxin to study cells outside the body for use in developing new disease treatments.

Kloxin hopes that kids, especially girls—who are still underrepresented in science and engineering—will leave the museum inspired to discover the world around them.

“I didn’t know a lot about opportunities in science and engineering growing up,” she said. “Some of my first exposures to science were at my local library, where they would bring in scientists who would bring in objects from the natural world or occasionally have a raptor show.” She wants to provide kids today with a similar opportunity.

Kloxin and the UD graduate students in her research group, such as doctoral student Amber Hilderbrand, have also learned from this exhibit as they refined it. The kiosk first appeared at the Delaware Museum of Natural History in 2015, and the group has added more activities and new insights from today’s research.

“The act of making the kiosk is also really educational for the graduate students who work with me,” said Kloxin. “They learn how to communicate their science in new ways. We’re training them not just on technical concepts but also on how to communicate with people.”

This exhibit was developed with funding from the National Science Foundation.