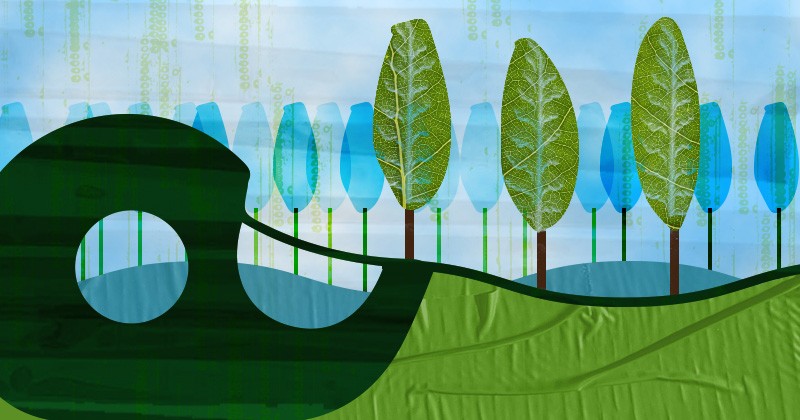 Whether you’re wrapping a gift or bandaging a wound, you rely on an adhesive to get the job done.

These sticky substances often are made from petroleum-derived materials, but what if there was a more sustainable way to make them? Now, a team of engineers at the University of Delaware has developed a novel process to make tape out of a major component of trees and plants called lignin—a substance that paper manufacturers typically throw away. What’s more, their invention performs just as well as at least two commercially available products.

The researchers recently described their results in ACS Central Science, and they are working on more ways to upcycle scrap wood and plants into “designer materials” for consumer use.

Lignin is a renewable resource, a substance in trees that helps to make them strong. But you do not have to cut down trees to get it, because there’s plenty lying around. When pulp and paper manufacturers process wood, the lignin is left behind and usually discarded in landfills or burned for heat. Some companies are even willing to deliver a free dump truck full of the stuff because that is cheaper than disposing of it in a landfill. An inexpensive, plentiful and sustainable material, lignin presents a prime opportunity for some scientifically advanced upcycling.

Lignin is also a natural polymer, a material made of very large molecules composed of smaller subunits called monomers. Lignin shares some structural and materials property similarities with petroleum-derived polymers, such as polystyrene and polymethyl methacrylate, which are commonly used in adhesives and other consumer products, from packaging materials to cups.

“One of the thoughts that we have always had is: Can we take lignin and make useful products, and in this case, useful polymers out of it?” said Thomas H. Epps, III, the Thomas and Kipp Gutshall Professor of Chemical and Biomolecular Engineering, Professor of Materials Science and Engineering at UD, and the corresponding author of the new paper. In particular, Epps suspected that lignin could be used to make adhesives with similar strength, toughness, and scratch resistance to the petroleum-based versions. Different tape has different ingredients in the adhesive and different strengths.

Before the lignin could be transformed into a product, it was broken down by researchers at the Catalysis Center for Energy Innovation (CCEI), a multi-institutional research center at UD established by a grant from the U.S. Department of Energy.

Dionisios Vlachos, director of CCEI and the Delaware Energy Institute, is an international expert in catalysis, processes that accelerate chemical reactions. For nearly a decade, Vlachos and his team have perfected methods to break down some wood components, cellulose and hemicellulose, into useful products. They aim to make renewable products that are better for the environment, with unmatched performance. However, compared to other wood components, lignin presents a tougher challenge.

“Lignin is very hard, a solid part of the biomass that is the hardest to break down,” said Vlachos. “Developing a catalyst and a process to actually crack these molecules is difficult.” UD Professor Thomas H. Epps, III, suspected that lignin could be used to make adhesives with similar strength, toughness, and scratch resistance to the petroleum-based versions. These figures from small-angle X-ray scattering experiments show how a polymer created by Epps (left) compared with a commercial one.

Then, Epps used those materials to synthesize new materials, adjusting their properties for use in pressure-sensitive adhesives, materials that stick upon contact.

“We start with a biopolymer, and we end up with another polymer,” said Vlachos.

“We can use the same separation, purification, polymerization, and characterization methods to make these materials as one can use to make the current commercial, and petroleum-based, analogues,” said Epps. “But we can get better properties, and we can use a much greener source.”

Using mechanical tests to determine adhesion and tackiness, the researchers found that their tape performed on par with Fisherbrand labeling tape and Scotch Magic Tape.

“We were expecting it to be competitive because we knew that if we could form well-defined polymers, we could engineer them to have similar performance,” said Epps. “The thing that we found a bit surprising and interesting is that our materials gave similar performance to Scotch tape and Fisherbrand tape without any additional formulation or other additives that are typically used in commercial materials to improve their performance.”

Many tapes have added tackifiers, substances that increase adhesion but can also decrease the lifetime of materials.

From the lab to your home

The research team utilized lignin sourced from poplar wood, but they plan to explore the potential of other woods and other plants with high lignin content, such as switchgrass.

“Let’s say we change to a birch tree, oak tree or pine tree, can we make these same designer materials, but with slightly different properties?” said Epps. Perhaps the materials could be reverse engineered to have varying levels of stickiness, yielding products from duct tape to electrical tape to painter’s tape to bandages to sticky notes and more. The adhesive strength of the material is tested in the lab.

The applications could also extend beyond tapes to include things like rubber bands, o-rings, gaskets and seals, or even car tires.

The team also aims to develop their processes further so that they can break down more of the lignin and optimize their processes. They plan to do additional testing to characterize the properties of their new materials.

“This could rejuvenate the paper industry because companies could someday sell the lignin to adhesive manufacturers,” he said. “Or, they could do the first round of processing on site and then sell the molecules to other companies.”

The research team has filed for a provisional patent on this work.

Collaboration at its best

This research exemplifies the power of collaboration between UD engineers.

“It includes everything from catalyst design to streamlined separations to synthesis and characterization of high performance materials,” said Epps. “It covers the gamut of what a chemical engineer does.”

The work was partially supported by funding from the National Science Foundation (CHE-1507010) and the Department of Energy – Basic Energy Sciences (DE-SC0001004).