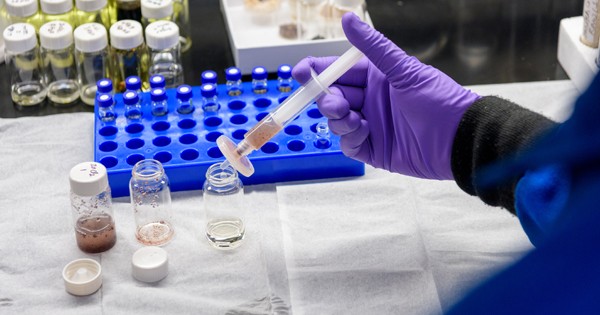 A new theory by researchers at the University of Delaware-led Catalysis Center for Energy Innovation (CCEI) will help bring greater accuracy and focus to molecular science research, with the potential for far-reaching impact across multiple industries.

The findings— reported by UD graduate student researchers Joshua Lansford and Alexander Mironenko with support from CCEI director Dionisios Vlachos—establish predictive capability for the behavior of molecules called adsorbates. Adsorption is a process by which molecules of gas, liquid or dissolved solids adhere to a surface, including metals such as iron, copper, nickel and titanium.

Adsorption is essential to important scientific processes like catalysis, and lends itself to multiple industrial applications, including water filtration, the production of non-stick coatings and silica gel, and even extending the shelf life of prescription medication.

CCEI’s theory, published in the November 2017 issue of the science journal Nature Communications, will help increase the rapidity and accuracy of thermochemistry predictions used in adsorption research.

“Our theory identifies important parameters that can be used in machine learning models to predict frequencies for larger molecules or more complex surfaces,” says Lansford. “Not only do these findings provide new insight into the interaction of molecules and surfaces, they will also guide and focus efforts in the future.”

Scientists have often used the classic arcade game Tetris, where blocks of varying shapes or sizes are assembled onto a flat surface, as a simplified illustration of how adsorbate molecules are “fused” to an adsorbent surface.

Adsorption is an essential first step in heterogeneous catalysis, including transforming non-food-based biomass materials into renewable fuels and chemicals. The scaling and modeling calculations proposed by CCEI can accelerate testing of new materials used in catalyst discovery.

“This is an exciting theoretical development that fills in a long-standing scientific gap,” adds Vlachos, who is also the Allan and Myra Ferguson Professor of Chemical and Biomolecular Engineering at UD. “It could allow one to identify species on surfaces, unravel structures of nanocatalysts, develop predictive models, and ultimately make better materials for production and storage of renewable energy, fuels and chemicals.”

The Catalysis Center for Energy Innovation is a multi-institutional research center led by University of Delaware and comprised of 10 academic institutions and two national research laboratories. Supported by the U.S. Department of Energy, Office of Basic Energy Sciences, through its Energy Frontier Research Centers (EFRC) program since 2009, CCEI and its researchers have been developing innovative catalytic technologies to efficiently convert biomass, such as trees and grasses, into chemicals and fuels.