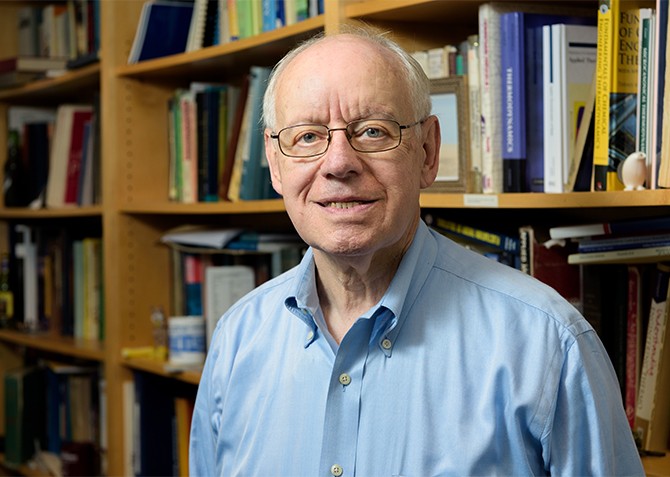 Stan Sandler usually takes the steps to get to his second-floor office in the University of Delaware’s Colburn Lab.

But today he’s taking the elevator because he’s hauling two black bags filled with heavy books — books that will be added to a growing pile destined to be shipped to developing countries including Nigeria and Ethiopia.

It’s easy to accumulate a lot of books over the course of an academic career, especially one that spans half a century, and, even with 150 or 200 books already boxed up, the shelves in Sandler’s office are far from empty.

The walls are crowded too — with framed certificates of the dozens of awards he’s won over the past 50 years.

While Sandler is proud of those awards — which include membership in the National Academy of Engineering and being named one of the top 30 chemical engineering authors by the American Institute of Chemical Engineers — there are other things for which he would like to be remembered.

The first, he says, is the many books he has authored, including two new ones in just the past two years.

“One of my texts is now in its fifth edition,” he says. “It not only changed what we do here but also has had an impact on instruction around the world.”

He’s also proud of the accomplishments of his students, his efforts to promote the use of computers in chemical engineering instruction, and his initiation of a conference series in thermodynamics that was supposed to be a one-time event but so far has had a 40-year run. The most recent meeting was last year in Porto, Portugal.

Now the Henry Belin du Pont Chair of Chemical Engineering at UD, Sandler has served as department chair and as interim dean of the College of Engineering, but his heart lies with research and teaching, not with administration.

This accomplished academician didn’t plan to be a college professor, but the encouragement of one of his professors at City College of New York, Robert Pfeffer, set him on this path.

“In my senior year, he encouraged me go to graduate school — a possibility that had never occurred to me,” Sandler says. “I had no idea what one studied in graduate school or that an assistantship would make such a choice financially viable.”

“Ever since then,” he adds, “I’ve considered mentorship of students to be very important because I wouldn’t be where I am today without him.”

After earning his doctorate at the University of Minnesota, Sandler still had no thoughts of academia.

“But I had done my Ph.D. thesis in kind of a weird area, so I was only getting weird job offers from industry, including one from Bell Labs focused on determining the potential effects of a nuclear attack,” he says.

So, with an offer in hand from UD, Sandler and his late wife, Judith, moved to Delaware.

Having grown up in Manhattan, he was unprepared for small-town life, and he promised Judith that they would stay just three years.

That was in 1967. Three children and several job offers later, they were permanently settled in Newark’s Oaklands neighborhood.

Sandler was also apprehensive about how he would fare as a faculty member at a top-ranked chemical engineering program, but his fears were unfounded. He was promoted to associate professor with tenure before his 30th birthday and to full professor by the age of 32.

Sandler’s early years at UD saw some Vietnam-era unrest, with protests on campus leading to the dismissal of a number of students and faculty. He quickly became an activist and was instrumental in establishment of the AAUP Collective Bargaining Agreement at UD.

In addition to his teaching and research at UD, Sandler has consulted on a number of projects, including the destruction of armed chemical weapons and the encasement of radioactive wastes left over from the production of plutonium for nuclear weapons during World War II and the Cold War. He has also served as an expert witness in patent litigation.

“Projects like these are far removed, to say the least, from 138th Street and Convent Avenue, where I arrived as a bewildered freshman,” he says.

And the young man whose parents never owned a car — believing that any place that couldn’t be reached by subway wasn’t worth going to — has since traveled the world. Between professional trips and personal vacations, Sandler has visited all 50 U.S. states and 110 countries.

Judith Sandler lost her life to cancer in 2014, and in 2017, he married Ellen Pifer, professor emeritus in UD’s Department of English.

At this point, Sandler shows no signs of slowing down — two of his books were published within the past two years.

Sandler joined UD in 1967. He was inducted as a fellow of the American Institute of Chemical Engineers (AIChE) in 1993 and the British Institute of Chemical Engineers (IChemE) in 2004. He was elected a member of the U. S. National Academy of Engineering (NAE) in 1996, and served as the editor-in-chief of the AIChE Journal, the leading publication in the field of chemical engineering, from 2000-11.

His numerous career honors include the Professional Progress and Warren K. Lewis Awards from AIChE, the E.V. Murphree Award from the American Chemical Society (ACS), the 3M Chemical Engineering Lectureship Award from the ASEE, the CACHE (Computer Aids in Chemical Engineering) award for excellence in chemical engineering computing from the American Society of Engineering Education (ASEE), and the Properties and Phase Equilibrium for Process and Product Design (PPEPPD) Eminence Award, of which he was the inaugural recipient. He is also a previous recipient of UD’s Francis Alison Award, the University’s highest faculty honor.