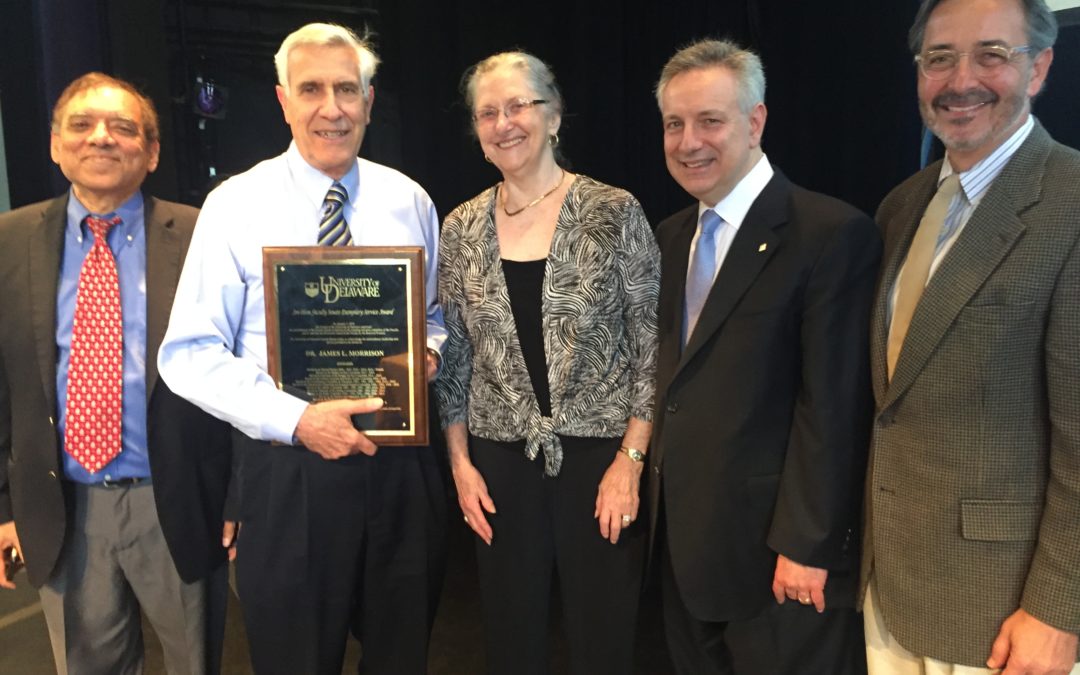 May meeting features faculty honors, presentations by provost and by outgoing Senate president

The Faculty Senate held its last meeting of the spring semester on Monday, May 1,  immediately after the General Faculty Meeting with UD President Dennis Assanis.

Highlighting the meeting were the presentation of several faculty awards, a report from Provost Domenico Grasso and a farewell from outgoing Senate President Prasad Dhurjati.

In addition to the Faculty Excellence Awards announced earlier this week in UDaily, the Faculty Senate also presented Jim Morrison, professor in the School of Public Policy and Administration, with the 2017 Jon Olson Exemplary Senate Service Award.

Dhurjati said Morrison was chosen for the award for serving the Senate in an exemplary manner through serving on and chairing multiple Senate committees, in addition to serving three different times as an elected senator.

“His reputation for service is as great as that of Jon Olson,” Dhurjati said.

The faculty honorees were recognized at the meeting and congratulated by Dhurjati, Grasso and Assanis.

In his remarks to the Senate, Grasso encouraged faculty to attend a forum to discuss the Diverse Learning Environments survey which will be held on May 9 from 2 to 4 p.m. in the Trabant Theater. He also announced that the Respect Committee has issued its report, now available on the Provost’s website.

In addition, Grasso suggested that faculty members interested in an Open Educational Resource Program contact Meg Grotti in the library. OERs not only ensure access to educational content (like textbooks) for students, but also help to achieve the University’s goals of affordability and accessibility.

And Grasso mentioned a structural review of the College of Engineering that has involved participation from deans at the University of Pennsylvania, Dartmouth College, University of Michigan and Texas A&M University.

Dhurjati closed the meeting with a few remarks summarizing his time as president. He included his accomplishments, as well as his recommendations for the Senate going forward.

“That’s a pretty ambitious thing to try to do,” Dhurjati said. “We’ve done a tremendous amount of work to make this happen.”

He also worked to improve transparency and introduce new technology for efficiency, as well as recruit the most talented faculty members to participate in Senate committees and serve as Senate officers.

In addition, Dhurjati offered a list of recommendations, including increasing the term of Senate president to two years, considering faculty representation on the Board of Trustees, and better communications with departments through a Senate newsletter.

Martha Buell will be the new Senate president, and the next meeting is scheduled for Sept. 11.