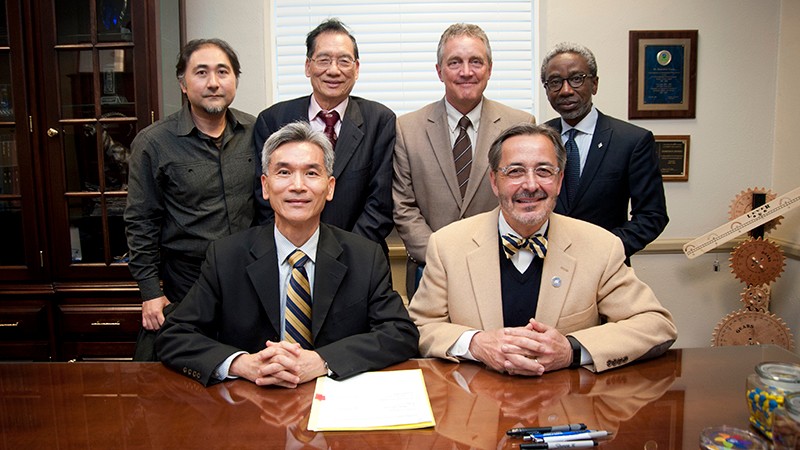 On April 25, Fuh-Sheng Shieu, president of the National Chung Hsing University in Taiwan, visited the University of Delaware to sign an agreement for a cooperative program that encompasses teaching, research, consultation and faculty and student exchanges.

The agreement is a renewal of one executed several years ago and has since been expanded through various supplemental agreements for specific programs, including the opportunity for students to earn doctoral degrees from both institutions in the areas of civil and environmental engineering and soil and environmental science.

C.P. Huang, Donald C. Phillips Professor at UD, was instrumental in laying the groundwork for the joint programs, and he has co-advised several students who have taken advantage of the opportunity to spend time in residence on both campuses as they work toward their degree requirements.

Yu-Han Yu, who completed his doctorate under the program, now manages a lab at UD and teaches a portion of two required environmental lab courses. His career goal is to become a professor.

“The scope of my research at NCHU was more on applied science — improving existing technology and applying it to an engineered system,” he says. “That work helped me to start my UD research, which is more basic science, without any gap.”

Yuanchi (Daniel) Liu, who worked for the public sector for about a decade after graduate school, is doing his Ph.D. research with Sue McNeil, professor of civil and environmental engineering at UD, on the resilience of civil infrastructure systems.

“The agreement between UD and NCHU offers me the opportunity to network with professors and researchers in this area through conferences, workshops and webinars,” Liu says.

“Most important, Prof. McNeil is a leader in the Center for Advanced Infrastructure and Transportation at Rutgers, which is supported by the U.S. Department of Transportation. This offers me a great chance to participate in policy research.”

Another of Huang’s students, Jing-Hua Tzeng, is in her first semester at UD after completing seven semesters at NCHU. Her major is soil and environmental sciences at NCHU, where she is advised by Yao-Tung Lin, a Delaware alumnus.

As a member of Huang’s aquatic chemistry group at UD, Tzeng is working on the application of biochar in agriculture.

“Joining this program has given me the chance to experience two different cultures in academic and general life in both Taiwan and the United States in my Ph.D. life,” she says. “I am sure that this dual-degree training will make my Ph.D. training become more solid.”

Tripp Shenton, chair of UD’s Department of Civil and Environmental Engineering, traveled to Taiwan to sign one of the agreements in 2009.

“At the time, we saw this as an exciting new type of cooperative program that would go beyond traditional faculty and student exchanges and foster true integration of students from each institution into the scholarly and social culture of the other,” Shenton says. “We have certainly seen that come to fruition over the past eight years.”