From Carbon Dioxide to Fuel 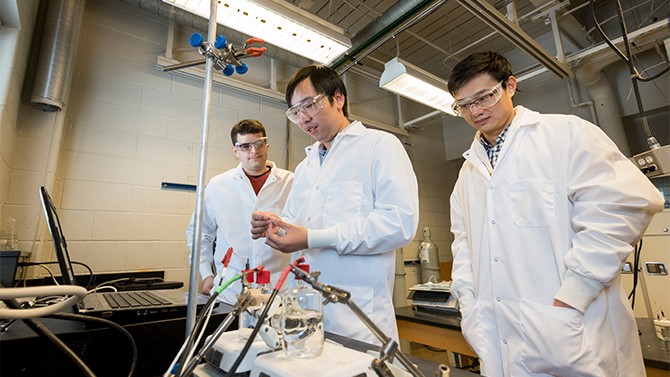 Carbon dioxide capture and sequestration is one of the technologies under investigation to mitigate CO2 emissions associated with coal-fired power plants.

However, according to the University of Delaware’s Feng Jiao, large-scale CO2 sequestration poses risks to the environment from leakage. Other disadvantages include limited efficient geological repositories and high transportation and compression costs.

In contrast, the use of CO2 as a cheap carbon feedstock for the production of fuels and chemicals has a number of economic and environmental advantages.

Jiao recently received a $1 million grant from the U.S. Department of Energy to investigate this alternative.

The grant, “Electrochemical Conversion of Carbon Dioxide to Alcohols,” was awarded through the National Energy Technology Laboratory.

Jiao explains that the proposed technology is an integrated electrolyzer system that takes flue gas from the power plant and produces multi-carbon alcohols through a two-stage electrolysis process.

“This is the first integrated electrolysis system that can produce high-concentration alcohols using the CO2 from flue gas,” he says. “Successful completion of this project will offer society a new approach to utilize greenhouse gas CO2 from coal-fired power plants as a chemical stock to produce valuable chemicals, such as ethanol and propanol. This is an approach that offers numerous benefits in terms of environmental and economic impacts.”

Feng Jiao joined UD in 2010. In addition to his faculty role as an assistant professor in the Department of Chemical and Biomolecular Engineering, he is affiliated with the Center for Catalytic Science and Technology.

In January 2014, he and his team reported the development of a nanoporous silver catalyst capable of electrochemically converting carbon dioxide to carbon monoxide with 92 percent efficiency. Silver offers high selectivity, costs much less than other precious metal catalysts, and remains stable under harsh catalytic environments. The breakthrough was documented in a paper published in Nature Communications.

Later in 2014, Jiao received a National Science Foundation Career Award to support his research on the use of bimetallic catalysts for converting carbon dioxide to carbon monoxide.