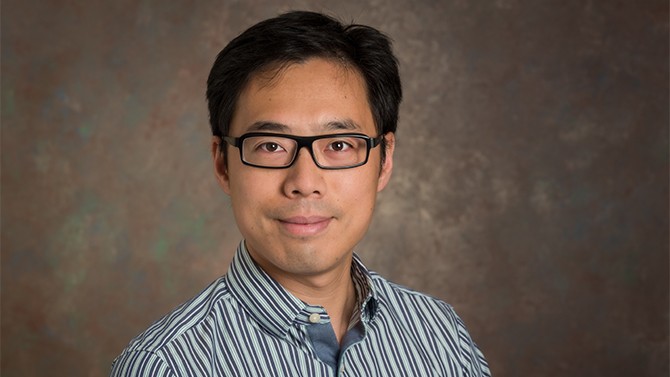 The five-year, $523,000 grant, “Elucidating Molecular Level Interplay Between Catalysts and Electrolytes in Electrochemical Reduction of CO2,” was awarded through NSF’s Division of Chemical, Bioengineering, Environmental, and Transport Systems.

“Climate change, largely caused by anthropogenic CO2 emissions, has sparked a great deal of interest in harvesting the sun and wind to produce renewable electricity, but a major disadvantage of these renewable energy sources is that they are intermittent,” says Xu, assistant professor in the Department of Chemical and Biomolecular Engineering.

“Matching peak production to peak demand generally involves storing the harvested energy in some way and then delivering it when it’s needed. An alternative is to use the energy as it’s produced for another application. Using it to remove CO2 from the environment could solve two problems at the same time.”

Xu’s research will focus on using the excess energy produced by renewables to convert existing atmospheric CO2 to fuels and commodity chemicals through an electrochemical process — a development that he says is hampered by a lack of understanding of the interaction among species at the electrochemical interface, such as the reactant, the electrolyte and the electrode.

To shed light on this interaction, Xu and his team will investigate the molecular-level interplay among cations, anions and surface-mediated reactions using a variety of advanced spectroscopic tools. The next step will be to establish guiding principles for process and device development.

“The level of atmospheric CO2 recently exceeded 400 parts per million, which is described as ‘the point of no return,’” Xu says. “So even if all CO2 emissions were stopped now, which is obviously not feasible, we would still endure the effects of this greenhouse gas for years to come. The only solution is to start removing it from the atmosphere, and we believe that our proposed approach is an economical, environmentally friendly way to do that.”

Bingjun Xu received his doctorate in physical chemistry from Harvard University in 2011. He joined the University of Delaware faculty in 2013 after spending two years as a postdoctoral researcher at California Institute of Technology.

His research group focuses on the development of innovative strategies to produce renewable electricity, fuels and chemicals by the rational design of efficient thermo- and electro-catalytic processes.