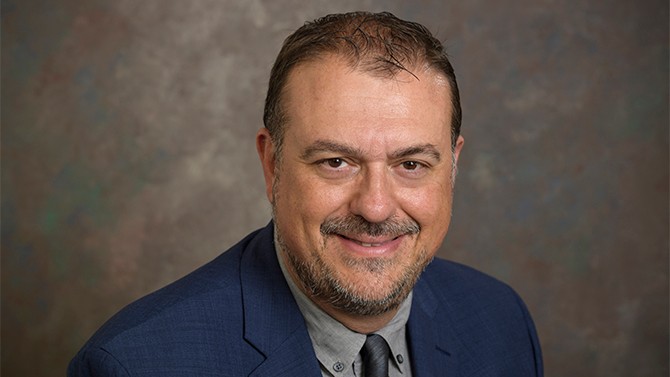 The University of Delaware’s Dion Vlachos, who has been named the Allan and Myra Ferguson Professor of Chemical and Biomolecular Engineering, will deliver his inaugural lecture at 4 p.m., Monday, April 17, in Room 204 Kirkbride Hall.

A reception will follow at 5 p.m. in the DuPont Hall Lobby. Those who plan to attend should RSVP by email to Sue Zatto.

The lecture, “Meeting Future Global Energy, Water, and Food Needs,” will address the grand challenges in meeting the global energy, water, and food needs that have emerged from growing population, urbanization and increasing emissions. Potential science and technology solutions will be outlined, and the need for new materials to meet these challenges will be discussed.

Multi-scale simulation will be introduced as an enabling technology to address diverse engineering topics leading to better solutions for the nexus of energy, water and food. An overview of work being done in the Catalysis Center for Energy Innovation (CCEI) on renewable chemicals and fuels from biomass will be given as one technological platform toward increasing energy and, in particular, to providing green transportation fuels and chemicals.

The newly awarded Rapid Advancement in Process Intensification Deployment (RAPID), a manufacturing institute of the Manufacturing USA initiative focusing on chemicals, will also be discussed as an effective engineering approach to reducing energy use in numerous established and emerging processes.

Prior to his new appointment, Vlachos was the Elizabeth Inez Kelley Professor of Chemical Engineering, and he holds a joint appointment as professor of physics and astronomy in the College of Arts and Sciences.

Vlachos is also director of the University of Delaware Energy Institute, the UD node of the manufacturing institute RAPID, and the Catalysis Center for Energy Innovation, an Energy Frontier Research Center.

Vlachos earned his doctoral and master’s degrees in chemical engineering and materials science from the University of Minnesota and his undergraduate degree from National Technical University of Athens. He was on the faculty of the University of Massachusetts for seven years prior to joining the UD faculty in 2000.

A prolific researcher, Vlachos has published more than 340 peer-reviewed scientific papers, which collectively have had over 10,000 citations. Currently, he is the executive editor of Chemical Engineering Science, a member of the editorial advisory board of ACS Catalysis, and a member of several international scientific committees and boards.

Vlachos has received numerous awards and honors, among them the 2016 Philadelphia Catalysis Club Award, the 2011 R.H. Wilhelm Award in Chemical Reaction Engineering from the American Institute of Chemical Engineers, election as a fellow of the American Association for the Advancement of Science in 2009, the National Science Foundation Career Award in 1997, and the Office of Naval Research Young Investigator Award in 1997.

The professorship was established in 2015 with a gift from UD alumni Allan and Myra Ferguson. Allan Ferguson had a 20-year career as a chemical engineer at Johnson and Johnson, then senior operating positions at two biotech companies, followed by 20-plus years in international venture capital investing in early-stage biotech and medical device companies.