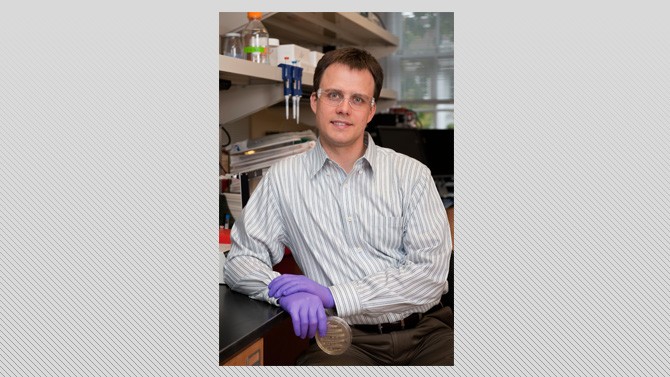 A team of researchers at the University of Delaware has discovered a new function for an enzyme that has long been known to have a central role in bacterial metabolism.

Maciek Antoniewicz, Centennial Junior Associate Professor in the Department of Chemical and Biomolecular Engineering, explains that metabolism is the set of chemical reactions that takes place inside cells to maintain life by breaking down substrate molecules such as sugars and generating energy and new cell components.

“Many of the core metabolic pathways are shared across widely diverse branches of life, and fundamental understanding of the enzymes involved is a central effort of cell biology and biochemistry,” he says. “This basic knowledge is also critical for efforts such as using models of metabolism to rationally re-engineer microbes for the production of biofuels or chemicals — that is, metabolic engineering.”

He and his team at UD recently investigated a system of four enzymes that work together to both bring sugar into the cell and carry out a downstream step in its breakdown in a process called glycolysis.

Enzyme I, the final step of the PTS reaction chain, carries out the downstream reaction converting the metabolite known as PEP to pyruvate. The Antoniewicz group demonstrated that Enzyme I is also able to perform the reverse reaction, converting pyruvate to PEP.

Their findings are reported in a paper, “Enzyme I Facilitates Reverse Flux from Pyruvate to Phosphoenolpyruvate in Escherichia coli,” published online in Nature Communications on Jan. 27.

“We’ve shown for the first time that Enzyme I plays a major role when the pathway runs in the reverse direction to generate sugars from non-sugar substrates like acetate and pyruvate in a process called gluconeogenesis,” Antoniewicz says.

“Additionally, we’ve shown that even when sugar is being consumed, and the major direction of carbon flow is from PEP to pyruvate, Enzyme I still facilitates some ‘back-flow’ in the opposite direction. We also studied some of the dynamics of the PTS reaction chain by observing that this back-flow is altered when the other PTS enzymes are removed one at a time.”

The study contributes to basic understanding of E. coli metabolism. Since the PTS system is used by most bacteria, Antoniewicz believes that these results are likely to be replicated in other species as well.

“E. coli is by far the most well-studied bacterium, so it is remarkable that we still are learning new things about its central pathways,” he says.

“It is also an important industrial microorganism, and sugar uptake and regulation in particular are areas of frequent interest for metabolic engineers. These results also challenge the conventional textbook wisdom about the energy and regulation of glycolysis, which says that the PEP to pyruvate reaction has a large energy drop and is thus irreversible.”

All of the researchers are affiliated with the Metabolic and Systems Biology Laboratory in UD’s Department of Chemical and Biomolecular Engineering.

This work was supported by a grant from the National Science Foundation, NSF MCB-1616332. Christopher Long was also supported by a University of Delaware Graduate Fellows Award.