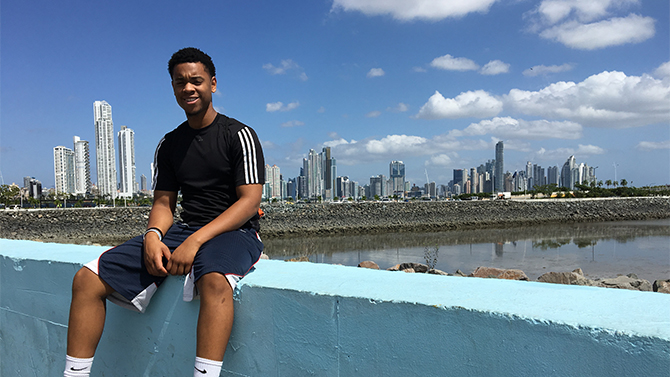 University of Delaware undergraduates Julian Jackson and Richard Egan have begun their first global experiences thanks to the Benjamin A. Gilman International Scholarship Program.

Jackson, a senior mass communication major and McNair Scholar, is currently studying abroad on a Winter Session program in Panama, where he is completing the final courses needed to graduate this spring with a minor in Spanish, in addition to two others in black American studies and journalism.

“The first reason I chose to study abroad was because it would allow me to graduate on time,” Jackson said. Second, he said, was his ability to complete Spanish coursework while immersed in the language and culture of Latin America. “I got off the plane and I just had to adapt. A big takeaway will be the conversational skills I gain.” Richard Egan, an Honors senior chemical and bimolecular engineering major, will travel to the National University of Singapore for a semester of study thanks to the Gilman Scholarship Program.

Egan, an Honors student who traveled to the National University of Singapore (NUS) for study this spring semester on an exchange through an institutional partnership between NUS and UD’s Department of Chemical and Biomolecular Engineering, also hopes the experience will set him up with the practical skills needed to navigate his future. During his time abroad, Egan will not only enroll in required engineering courses, but will also branch out to study Thai.

“After graduation, I hope to pursue research on sustainable palm oil production,” said the senior engineering student. “This is the perfect opportunity to begin studying the language I’ll need to delve into the socioeconomic, environmental and political facets of the industry.”

Both are looking forward to discovering the culture of their host destinations. For Jackson, the program will provide an opportunity to explore African heritage around the world. “I want to know what it is like to be Afro-Latino in Panama,” he said.

A unique element of the Gilman Program, each will return from their study abroad program to complete a follow-on service project, encouraging others to take the leap of faith and apply for a Gilman Scholarship, too.

“I heard about the Gilman Scholarship through friends who were older than me and had also received an award. I communicated with them throughout the entire application process,” said Jackson. “So, I plan to shoot, edit and produce a video of my experiences in Panama. I will present to students who I most identify with, other young, black students.”

Jackson plans to organize gatherings at the Center for Black Culture and to make himself available for guidance at the Institute for Global Studies.

Egan hopes to reach students through presenting to UD’s Greek Life fraternities and to establish mentoring for first generation students who would like guidance on the journey to studying abroad.

According to the Institute for International Education’s Open Doors data, during the 2014-15 Academic Year, approximately 33 percent of study abroad participants nationwide were male. A much smaller number, just 5.6 percent, identified as African American.

“A lot of times, students find themselves during the summer or winter sessions with nothing to do. I want others to know that this is an amazing opportunity and that study abroad is feasible if you just look for the resources,” said Jackson.

Undergraduate Pell Grant recipients accepted to UD summer 2017 or fall 2017 study abroad programs have until March 7 to submit an application for the Benjamin A. Gilman International Scholarship Program. Those interested in applying are encouraged to contact study abroad coordinator Marie Gleason.

About the Institute for Global Studies

The Institute for Global Studies was created in 2009 to enhance the international dimensions of teaching, research and outreach at the University of Delaware. IGS provides leadership and support for programs and experiences that contribute to the education of informed, skilled, open-minded citizens of the world.

IGS sponsors such signature events as Global Month each fall and country-specific celebrations each spring.

IGS collaborates with other global partners on campus, including the Office for International Students and Scholars, the Confucius Institute and the Center for Global and Area Studies. In addition, IGS partners with Enrollment Management to coordinate the UD World Scholars Program.