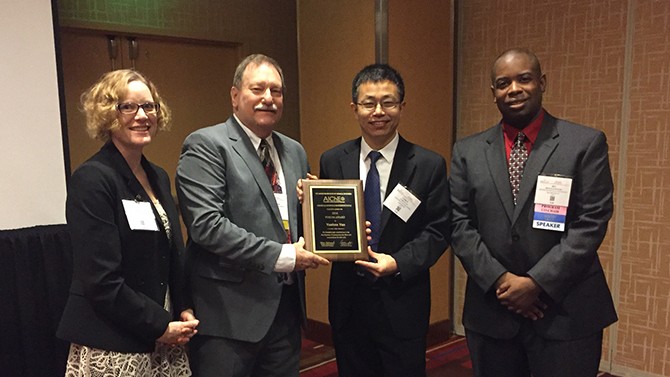 Yushan Yan, Distinguished Engineering Professor in the Department of Chemical and Biomolecular Engineering at the University of Delaware, has been selected to receive the 2016 Nanoscale Science and Engineering Forum Award from the American Institute of Chemical Engineers (AIChE). He is being honored for “breakthrough contributions to the development of nanoporous thin films and nanocatalysts for fuel cells.”

The award recognizes outstanding contributions to the advancement of nanoscale science and engineering in the field of chemical engineering through scholarship, education or service.

Yan is internationally recognized for solving many of the most critical renewable energy problems. His work has led to more than 170 invited lectures, 60-plus trained scientists and engineers, some 200 journal publications, 25 patents, seven startup companies, and one commercialized technology.

The impact of Yan’s research is also reflected in the citations of his papers and in the coverage of his work by the media including Business Week, New Scientist, C&EN News, Materials 360, Chemical Engineering Progress, Chinese Daily News, China Press, CNN.com, CNBC, KABC, Voice of America, Radio Australia, and others.

He received the award at the 2016 AIChE annual meeting, held from Nov. 13-18 in San Francisco, where he delivered his award lecture, “Toward a Distributed Renewable Electrochemical Energy and Mobility System (DREEMS): Electrocatalysis for Automotive Fuel Cells.”

The lecture highlighted a recent breakthrough by Yan and colleagues that promises to bring down the cost of hydroxide exchange membrane fuel cells (HEMFCs) by replacing expensive platinum catalysts with cheaper ones made from metals like nickel. The researchers achieved the breakthrough by switching the fuel cell operating environment from acidic to basic.

Yan also pioneered the catalyst concept of platinum nanotubes and thin layers on metal nanowires for proton exchange membrane fuel cells (PEMFCs), which are attractive for powering cars because of their high efficiency, high power density, and zero emission.

Earlier this year, it was announced that UD had been awarded one of 16 grants funded by the U.S. Department of Energy’s Advanced Research Projects Agency-Energy (ARPA-E) through its new IONICS (Integration and Optimization of Novel Ion-Conducting Solids) program. Yan is leading that $1.8 million multi-institutional effort aiming to improve the performance of HEMFCs.

Yan, who also serves as associate dean for research and entrepreneurship in the College of Engineering, earned his undergraduate degree at the University of Science and Technology of China and master’s and doctoral degrees at the California Institute of Technology.