New Brew in Quest for Biofuel 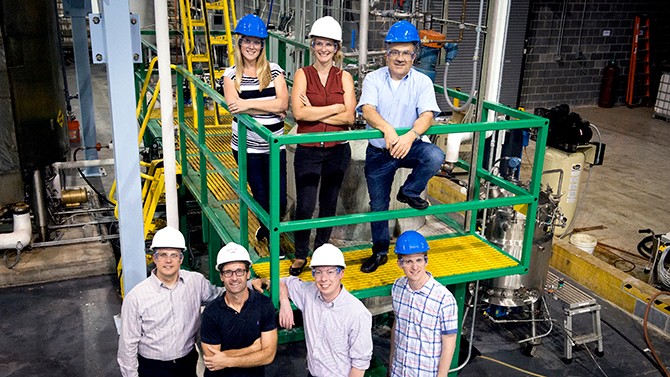 You don’t have to be a beer lover to understand the chemistry behind new research emerging from two labs at the University of Delaware and their collaborators at White Dog Labs in New Castle, Delaware. But if you are, you might want to raise a toast to their latest brew.

They’re not working with hops and malt, mind you, but the same engine that produces beer – fermentation – drives the work now featured in a new article in Nature Communications.

Unlike that barley soda, which sparkles with little bubbles of escaping carbon dioxide, the product these researchers are delivering – acetone – comes with near-zero carbon emissions.

Researchers have identified a promising blend of bacteria and synthesis gas that, in laboratory tests, is producing much more acetone than other methods while avoiding the carbon dioxide emissions dilemma.

The acetone is a proof-of-concept project with value of its own, but it also could lead to significant advances in the quest to produce biofuels – renewable, sustainable energy from sources that do not add to the planet’s carbon pollution.

The work is done in two labs at UD – those of Eleftherios (Terry) Papoutsakis, the Unidel Eugene du Pont Chair of Chemical Engineering, and Maciek Antoniewicz, the Centennial Junior Professor of Chemical and Biomolecular Engineering – in partnership with White Dog Labs, a young biotechnology firm that is pursuing new ways of reducing carbon emissions and increasing efficiencies.

It was well known that some bacteria would grow well on sugars, some on gases.

But in typical fermentation, using one kind of fuel, “only about two-thirds of the carbon ends up in the product and the other third goes to carbon dioxide,” said Elli Carlson, a doctoral student in Papoutsakis’ lab and one of the authors of the paper. “That’s great for brewing – we get carbonation. But for our purpose, on an economical basis, we’re losing some of the mass we put in and it’s going into the atmosphere.”

The new quest started when Papoutsakis asked another doctoral student, Alan Fast, to try to calculate how well bacteria known as acetogens would do making biofuels.

Acetogens are anaerobic bacteria, which cannot grow in oxygenated environments. They can take carbon dioxide and hydrogen gas and turn them into chemicals like acetone, butanol or ethanol.

“We’re talking about taking carbon dioxide and turning it into a useful chemical,” said Fast, a co-author on the article. “Carbon dioxide is not very chemically active. It’s difficult to work with on its own. Only specialized bacteria and processes can take it and fix it into molecules.”

In this study, researchers tested how the bacteria known as Clostridium ljungdahliiwould do with two sources of fuel – sugars and synthesis gas – in the fermentation process.

They wanted maximum yield, minimal emission – and they got more than they hoped for on both counts.

The bacteria gobbled up both the sugars and the gas, gave off virtually no carbon dioxide and produced 38 percent more acetone than the previous maximum.

“Before this, it was all hypothetical,” said Shawn Jones, director of molecular and microbiology at White Dog Labs. “This is the first demonstration that it takes place. We get both the increase in yield and consumption of all the carbon.”

This “mixotrophy” is broadly applicable, too, the study showed.

“There is a whole host of strains we could use,” Jones said, “depending on the characteristics of the different strains.”

The science is solid, said White Dog Labs CEO Bryan Tracy, who has a doctorate in chemical and biological engineering and serves as chair of the Delaware Sustainable Chemistry Alliance.

“Our relationship with UD – with Terry and Maciek’s lab – means we’re able to do a lot more fundamental analysis that we wouldn’t do as a commercial entity,” Tracy said. “They are the right partners and have the academic savvy and capability to help us interrogate the fundamental aspects of the technology more thoroughly.

“By doing that, we also collaboratively open up a new field of fermentation investigation – concepts that will have a big impact in the academic world.”

Tracy sees other synergies down the road, new ways to mix biological and fossil materials.

“It shouldn’t be bio versus fossil,” he said. “Each has significant advantages and challenges. Why not synergize the two? You can significantly reduce reliance on fossils – not completely independent, but significantly reduced. This could be the route of the future nonetheless, until bio-based technologies can compete on the economics. This might be the most viable approach for quite some time.”

Carlson said Papoutsakis has been key to advances in biotechnology at UD and said the collaboration with White Dog Labs puts the team on the “cutting edge” of applied technology and academic research.

“It’s exciting for a young researcher like myself to see it,” she said.

Tracy said White Dog Labs is on a fast track to scale and commercialize the technology.

“The interaction between White Dog Labs and UD is a wonderful example of the core competencies of UD and Delaware as a whole translating into a commercial competitive advantage that accelerates the business and technology capabilities of early-stage companies,” he said.

Fast said there is much more to come.

“There are quite a few challenges to overcome,” he said. “Looking forward, there are a lot of opportunities to design reactors that can use gases and sugars at the same time.

“The science is super exciting and, ultimately, getting biofuels into our gas tanks is just about lowering the price of the biofuel.”

BiomolecularNew Brew in Quest for Biofuel