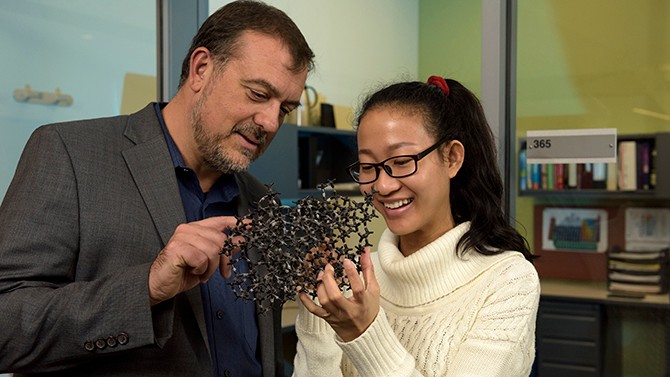 Dionisios G. Vlachos has been named the inaugural Allan and Myra Ferguson Professor of Chemical and Biomolecular Engineering at the University of Delaware. He also has been appointed director of the UD Energy Institute.

“Dion Vlachos has an international reputation as a leader in renewable energy research and catalysis,” said Provost Domenico Grasso. “He brings tremendous knowledge and dedication to the quest for clean energy solutions and is generous in sharing his expertise with his students and colleagues. These types of appointments are designed to recognize considerable achievements and impact. Dion is a world-class scholar and we are fortunate to have him at UD.”

“This recognition is well deserved,” said Babatunde Ogunnaike, dean of the College of Engineering. “Dion Vlachos is driving new discoveries in catalysis and pioneering applications to the renewable energy challenge, working with colleagues and students at UD and with research partners around the world. He is a perfect exemplar of the University’s commitment to excellence in teaching, mentoring, scholarship and service — a tradition that Allan and Myra Ferguson have generously supported.”

The Fergusons, both alumni of the University of Delaware, committed $3.5 million to the Department of Chemical and Biomolecular Engineering last year to establish the award. Allan Ferguson had a 20-year career as a chemical engineer at Johnson & Johnson, then senior operating positions at two biotech companies, followed by 20-plus years in international venture capital investing in early-stage biotech and medical device companies. The Fergusons are now retired and live in New Hampshire, where they manage a tree farm.

“Knowing Allan Ferguson for years through his close ties with the department makes this tremendous honor even more special,” Vlachos said. “Allan’s strategy — to focus on simplifying real-world problems, breaking down complexities into simple parts — aligns so well with my research. Simplicity in solving a problem is elegant and reminds me of the giant Albert Einstein who said, ‘Make things as simple as possible, but not simpler.’”

As founding director of the Catalysis Center for Energy Innovation (CCEI), Vlachos leads a research team from UD and nine U.S. partnering institutions who are developing catalysts with the chemical muscle to convert wood chips, corn stover and other biomass into the sugars and oils that can be used to make fuel and useful chemicals. In 2009, the U.S. Department of Energy awarded CCEI a $17.5 million, five-year grant to accelerate this work, designating it an Energy Frontier Research Center. DOE renewed its support to CCEI in 2014 with a $12 million grant.

Additionally, Vlachos is conducting pioneering research in multiscale mathematical modeling, which identifies key parameters necessary to solving a problem and eliminates those parameters that don’t matter, reducing computing power and time. His approach is being applied in such fields as energy conversion, nanotechnology and cellular engineering.

As the new director of the University of Delaware Energy Institute, Vlachos takes the helm of a university-wide entity that has more than 250 affiliated researchers working on energy policy, catalysts, vehicle-to-grid technology, hydrogen fuel cells, solar technology, wind power and next-generation magnets.

Vlachos succeeds Michael Klein, Dan Rich Chair of Energy, who led UDEI since July 2010 and will return to the University faculty after a year-long sabbatical.

“We thank Mike Klein for leading the University of Delaware Energy Institute during the past six years,” said Charlie Riordan, deputy provost for research and scholarship. “UDEI has facilitated the expansion of the University’s expertise and partnerships in sustainable energy technologies. I look forward to working with Dion Vlachos to further cultivate and strengthen the vision, partnerships and impact of UD’s broad-based energy portfolio.”

“I’m looking forward to building on this strong foundation,” Vlachos said. “With rapid changes in the business and energy sectors — such as increased opportunities for solar penetration and low oil prices, along with increased population and urbanization in certain regions of the world — there are opportunities to engage our campus in new energy challenges.”

Vlachos earned his doctoral and master’s degrees in chemical engineering and materials science from the University of Minnesota and his undergraduate degree from National Technical University of Athens. He was on the faculty of the University of Massachusetts for seven years prior to joining the UD faculty in 2000.

Currently, he is the Elizabeth Inez Kelley Professor of Chemical Engineering in the Department of Chemical and Biomolecular Engineering, and holds a joint appointment as professor of physics and astronomy in the College of Arts and Sciences.

A prolific researcher, Vlachos has published more than 340 peer-reviewed scientific papers, which collectively have had over 10,000 citations. Currently, he is the executive editor of Chemical Engineering Science, a member of the editorial advisory board of ACS Catalysis, and a member of several international scientific committees and boards.

Vlachos has received numerous awards and honors, among them the 2016 Philadelphia Catalysis Club Award, the 2011 R.H. Wilhelm Award in Chemical Reaction Engineering from the American Institute of Chemical Engineers, election as a fellow of the American Association for the Advancement of Science in 2009, the National Science Foundation Career Award in 1997, and the Office of Naval Research Young Investigator Award in 1997.