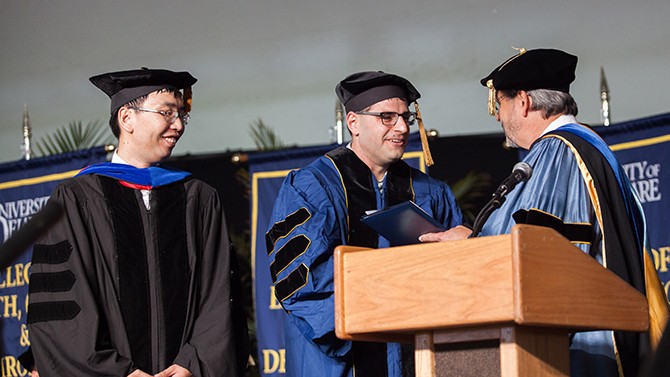 As the University of Delaware recognized more than 160 students who completed their doctoral studies at the Doctoral Hooding Convocation held May 27 on The Green, top prizes went to six students and one faculty member for exceptional achievements.

UDaily provides this collection of Provost Domenico Grasso’s remarks on each prize winner:

• Allan P. Colburn Prize in Engineering and Mathematical Sciences. “The recipient is Jonathan Rosen, Department of Chemical and Biomolecular Engineering. In the words of his adviser, Prof. Feng Jiao, Jonathan is by far the best student he has ever had at UD and has clearly demonstrated his extraordinary research capability and skills by publishing nine papers in top-tier, peer-reviewed scientific journals, including first-author papers. His work has appeared in journals such as Nature Communications, the Journal of the American Chemical Society, and the Journal of Catalysis, and have received more than 210 citations in less than five years.

“Finding ways to convert greenhouse gas carbon dioxide emissions from fossil fuel use into other chemicals and fuels is a central vein of clean energy research. Jonathan’s breakthrough work in developing a selective and efficient catalyst for carbon dioxide reduction is an important contribution to this research field.

“He will continue this research at Exxon Mobil Research and Development.”

• George Herbert Ryden Prize in the Social Sciences. “The recipient is John Bockrath, Department of Economics. As his adviser Prof. Michael Arnold notes, Bockrath’s research represents a significant advance in our understanding of the impact of transportation costs and constraints on international trade flows. His work estimates that goods transported via liner shipping represent 60-70 percent of total world trade value and an even higher percentage of the value of developing countries’ economies.

“John’s research has landed him a highly desired position with the U.S. Bureau of Economic Analysis, where he is developing and implementing new methods for incorporating international transportation services in measures of global trade and productivity.”

• Wilbur Owen Sypherd Prize in the Humanities. “The recipient is Ai Hisano, Department of History. The history of the senses in general, and of color in consumer goods in particular, has become significant to historians, but Ai is the first business historian to consider how our concepts of ‘fresh’ and ‘natural’ foods were produced by the complex science, engineering, and marketing of the food industries in the late 19th and 20th century.

“Ai’s scholarship brings together a stunning range of issues beyond the basics of business and government in the regulation of food coloring. Her work makes one think about what color means and has meant to producers and consumers.

“In the fall she heads to the Harvard Business School, which has awarded her its prestigious postdoctoral fellowship, the Newcomen Fellowship in Business History.

“Her adviser was Prof. Susan Strasser.”

“His 750-plus-page dissertation has led to numerous publications in such journals as the Journal of the American Chemical Society and Journal of Organic Chemistry, and Biochemistry.

“As noted by the faculty who nominated him for this award, this dissertation is truly remarkable in scope, a “ tour-de-force of multidisciplinary science.”

“His adviser was Prof. Neal Zondlo.”

• The Dan Rich Prize. “Ashley Farmer of the Department of Sociology and Criminal Justice is the recipient of the Dan Rich Prize, awarded to a student whose doctoral research has the potential to make a difference in the lives of Delawareans. Ashley’s research involves local residents and police officers in the Wilmington, Delaware, area.

“Her dissertation addresses the dynamics of police-citizens encounters and relations, and resulted in the collection of valuable original data on an array of vital criminological and sociological issues, such as social media, passive resistance, citizen journalism, police-minority relations, and police legitimacy and accountability. Her work is immediately relevant to highly debated public policy and practice, especially during the post-Ferguson time of American policing when issues of race, crime, social justice, and domestic governance are so complexly intertwined.

“Her adviser was Prof. Ivan Sun.”

“Erin also spent a semester at Cedar Sinai Hospital in California, where she worked alongside company leaders and biomedical and clinical investigators in developing a bioinformatics framework for integrating electronic health records of children with genomic and proteomic information. The overall goal of her project is to translate large genomic datasets into conclusions of clinical value to physicians.

“Erin’s bioinformatics tools for clinical genomics are being integrated into pipelines supporting nearly 100 research investigators across the UD campus and Delaware partner institutions.

“Erin continues her work with Nemours, where her project is being translated into the direct clinical care of children with acute myeloid leukemia.

“Her adviser was Prof. Cathy Wu.”

“Andrew’s students admire his great strengths as a scholar. But they also value highly his dedication to his students’ work: his generosity with his time; his ability to foster the talents of everyone in his research group; his constant encouragement and feedback; his interest in helping graduate student research novices develop into research colleagues.

“As one former student said, ‘After being at UD, I have worked at the University of Connecticut, Harvard and now with collaborators from Colorado School of Mines, Texas A&M and Imperial College London and I can truly say that Andrew’s set of skills as advisor is rare and unique in academia, making him one of the best not only in the US, but in the field in general.’

“Another former student who now has his own lab with graduate researchers wrote that he sometimes asks himself a question: ‘What would Andrew do in this situation?’

“A current student wrote, ‘If I have a chance to become a faculty member in the future, I would like to become a person like him.’

“Since coming to UD in 2004, Prof. Teplyakov has served or is currently serving on a total of 43 dissertation committees.

“Murray Johnston, chair of the Department of Chemistry and Biochemistry describes Prof. Teplyakov as ‘a pillar of the graduate program.’ He richly deserves the University’s highest award for graduate advising and mentorin.