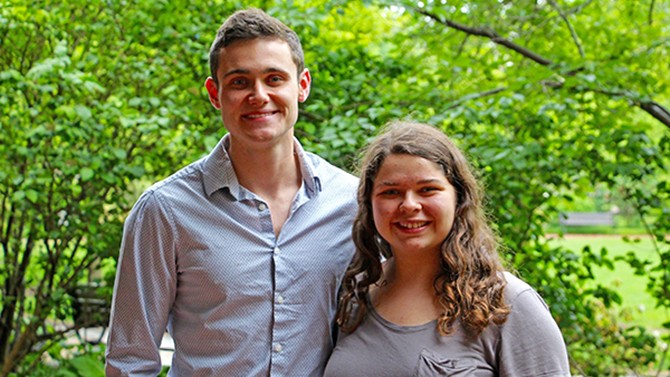 Graduation and Peace Corps on horizon for two UD seniors

Two University of Delaware students, John McCarron and Bridgette Spritz, have been selected as Peace Corps volunteers. Ghana and Rwanda will become home to McCarron and Spritz shortly after this weekend’s Commencement festivities come to an end.

In fact, McCarron, an Honors Program student and chemical engineering major, will receive his honor’s degree with distinction, walk in the University’s Commencement, attend convocation, and depart on his Peace Corps journey – all in just two short days.

McCarron will travel to Ghana where he will teach math to middle school students. “I think I’ve known that I wanted to do this for several years now,” the seasoned chemistry and engineering tutor said.

While Ghana’s official language is English, McCarron will spend his first three months in-country stationed in the capital city of Accra, where he will take intensive courses in Asante Twi to help him navigate locally.

“It will be so different than what I have been doing for the past four years,” said McCarron. “I’m looking forward to taking some time to be introspective, to reflect, and to learn a new way of life.”

McCarron looks at the program as a way of giving back before moving on to his career in medicine. “I have had so many opportunities that most of the world has never come close to getting. I felt that before I just kept running ahead with everything, I should take a step back and try to repay some of the wonderful things the world has done for me.”

Once McCarron settles into his new community this fall, he will look for opportunities to branch out, to perhaps tutor students in science, to practice new language skills with his host family and friends, and “to try new things is the goal,” he said.

Spritz, too, has dreamed of becoming a Peace Corps volunteer. “I heard about Peace Corps in high school through one of my teachers,” she said. “He spoke about the organization with such respect.”

According to Spritz, it was two study abroad programs – freshman year to Morocco and later to Malaysia and Vietnam – with Audrey Helfman of the School of Public Policy and Administration that gave her the “confidence and curiosity” to take a leap of faith and apply to the program.

“I feel like I’ve really benefited,” she shared. “Those experiences abroad have changed my perspective on what people’s lives are like and what their needs are.”

Spritz, an international relations major with minors in Islamic studies, Arabic language, and organizational and community leadership, will depart in September for Rwanda to teach English.

Here, Spritz will not only learn Kinyarwanda, one of the country’s three official languages, but expects that she will also pick up a working knowledge of French.

During the application process, Spritz allowed the Peace Corps program to choose her location of service. “I figured that they’ve done this before and I should trust the process.”

While she had never previously considered traveling to Rwanda, Spritz eagerly anticipates digging deeper into the country known predominantly by Americans for its 1994 genocide. “I’m really interested in learning more about Rwanda, in getting beyond that one dominant narrative of the country.”

What is more, Spritz, a former resident assistant (RA), expects that finding her own place within a Rwandan community will be particularly rewarding. “At the University of Delaware, because it is a middle-sized school, you have to find your space, where you fit in, your group and your formative role in it,” said Spritz. “I want to do the same thing in Rwanda, find my community and find my space.”

About the Peace Corps

The Peace Corps is the preeminent international service organization in the United States that has sent more than 220,000 American volunteers to serve in 140 host countries since its foundation by John F. Kennedy in 1961.

Those interested in learning more about the Peace Corps or the application process are invited to contact the University’s official representative, Nicholas Dippel.