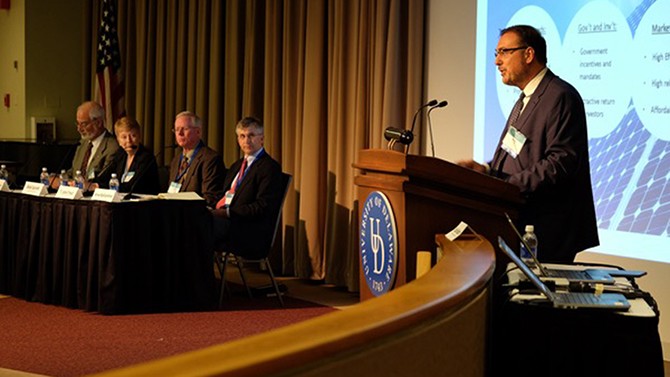 Experts from across the United States gathered at the University of Delaware on Friday, May 13, to participate in National Lab Day.

The event included a series of panel discussions related to the overall theme Clean Energy: Challenges and Opportunities on topics including security, power generation, grid modernization and storage.

Following are reports from the panels:

Electrification is the greatest engineering achievement of the 20th century, according to the National Academy of Engineering, said moderator Charlie Boncelet, professor of electrical and computer engineering at UD.

But ensuring a steady supply of electricity — safe from cyberattack — already is a big worry for the 21st century. It’s no longer a matter of if, but when, cyberattackers will target America’s power grid, U.S. officials have said.

It’s already happened to Ukraine. On Dec. 23, 2015, cyberattackers took down that nation’s grid, knocking out power for hundreds of thousands of customers.

This session’s panelists highlighted challenges they face in today’s cyber war, from the type of cybersecurity specialists needed, to new tools for fighting the battle.

Idaho National Laboratory (INL), which plays a key role in developing and testing U.S. grid security technology, is looking to universities for cyber specialists with electrical and computer engineering degrees, who also have a multidisciplinary focus, according to Rob Hovsapian, a research scientist and group leader there.

INL has several existing strategic university partnerships, and is in discussions with UD, which has been designated a National Center of Academic Excellence in Cyber Defense Education. INL offers a 12-month doctoral program that gives students the opportunity to work on their doctoral research right in their labs.

“The days of one lab or university on its own are gone,” Hovsapian said, emphasizing that cybersecurity requires collaboration among national labs, universities and industry.

According to John McDonald, business development leader at GE Grid Solutions, the automated control systems for the energy industry, known as supervisory control and data acquisition (SCADA) systems, were built without much thought about cybersecurity — until the attacks of 9/11.

“That was a wake-up call,” said McDonald, who has 42 years of experience in the electric utility industry. “Since then, emphasis has been on every aspect of the system.”

Prior to the mid-1990s, these SCADA systems were driven by serial communication with proprietary protocols, meaning that a system’s vulnerability was only point to point, and a breaker couldn’t be tripped to bring it down. Much more network communication is used today, however, so if someone can get into the network, they can access much more of the system.

McDonald said there are a lot of architectural tradeoffs in implementing cyber functionality, and consideration needs to be given to price-performance tradeoffs.

“You have to put the business hat on, as well as the technical hat,” he said.

In the future, managing the grid will actually mean managing a series of microgrids. The future grid also will be much more volatile as renewables grow, he said, describing a coastal California community with solar panels on rooftops that all went instantly from zero to 100 percent production, as a layer of marine fog burned off.

Alex Kent, senior research scientist at Los Alamos National Laboratory, said, “We have a long way to go in traditional cybersecurity,” and keyed on “the three D’s” to illustrate his point.

We can deny the adversary by building protections such as firewalls. “We have a leg up there and can constrain the cyber components to do what we want,” he said.

As for deter, anyone with a computer can be a hacker and the Internet has no boundaries. While people are put in jail for hacking in the U.S., that’s not the case in many other countries.

Detect is the last piece. “For all we do, people get into our systems,” Kent said. “I don’t believe there is any system on the planet without some level of malicious activity.”

New tools are coming online, though, to fight the cyber battle. PathScan, developed at Los Alamos, and now being commercialized with EY, builds statistical models to characterize the normal traffic flow between communicating computers. If the observed flows are unexpected in the context of the statistical models, it may mean a cyber attacker is moving through the network.

According to Trout, solar technology is witnessing tremendous growth, with 50 gigawatts — enough to power 8 million homes — installed in 2015 alone. Prices are decreasing while new architectures and other innovations are entering the market.

The main challenge for industry, Trout said, is continuing to bring costs down without sacrificing long-term quality and reliability.

Bobi Garrett, deputy director of lab operations at NREL, said that the use of all renewables is growing, with 130 gigawatts installed globally in 2015 at a cost of $286 billion.

“However, these technologies don’t all stand on their own without incentives,” she said. “We need them to achieve grid parity.”

Important research efforts in solar include next-generation materials, improved reliability, and the establishment of standards and science-based methods to determine what drives degradation.

One innovation currently being explored is on-site manufacturing of turbines to eliminate the issues associated with transporting large blades to wind farms.

Bloom Energy vice president Arne Ballantine said that the future lies in distributed and personal power that is highly customizable, flexible, and adaptable to customer needs.

Concepts in the new energy paradigm include mission-critical reliability, resiliency to threats, sustainability, and low-cost predictability.

Bob Lieberman, president of the Society for Optics and Electronics, concluded the panel discussion by reminding everyone that fossil fuels still account for about 80 percent of the market.

“Fossil fuels are going to be with us for a while,” he said. “It’s important to develop new technologies, but in the meantime there’s a lot we can do to maximize efficiency and minimize effects on the environment.”

The panel was moderated by Dion Vlachos, Elizabeth Inez Kelley Professor and director of the Catalysis Center for Energy Innovation at UD.

An electrical grid is an interconnected network for delivering electricity from suppliers to consumers and includes generating stations, transmission lines and distribution lines that connect individual customers.

“The rapid expansion of renewable electricity generation and electric cars, and the shift from large centralized power plants to decentralized ones will really be the thing of the future,” Budischak said.

Levitt noted that grid is about 100 years old, and has really seen some dramatic changes in the past decade that indicate progress toward the evolution of clean energy generation.

“We’ve seen hundreds of billions of dollars invested in pollution controls for power plants, tens of billions of dollars in new record efficiency gas-powered electrical generating plants, and the same invested in new solar and wind power plants,” Levitt said. “The result of all of this is that we have seen an astonishing decline in the emission of pollutants, including carbon emission rates that have declined more than 13 percent in the last 10 years.”

The existing national power system has served us well, King said, but the 21st century needs a grid to match needs and expectations.

“The important drivers are emerging threats, whether it’s Mother Nature or security issues, including cybersecurity,” ” King said. “The other driver is clean energy generation.”

Resilience in the wake of physical and cyber threats is a key component in taking the grid to the next level through modernization, Walck said.

Gould noted that the evolution of smaller, interconnected power distribution systems highlight a fundamental transformation in the energy system.

“The customer is at the center of this transformation,” Gould said. “We need to take a customer-centric perspective on these trends, and to look at what is driving them.”

Gould added that utilities must evolve to create a platform to realize customer expectations through physical, social media and digital means and the development of new business models.

Finding ways to store energy is a critical challenge in the nation’s effort to build a sustainable energy environment.

A panel moderated by Noureddine Melikechi, vice president for research, innovation and economic development at Delaware State University and founding director of its Optical Science Center for Applied Research (OSCAR), spoke to advances in the science as well as continuing challenges.

Yushan Yan, associate dean for research and entrepreneurship and Distinguished Professor of Engineering in the University of Delaware’s Department of Chemical and Biomolecular Engineering, talked about his research group’s work on fuel cells and the need to reduce costs and improve durability to meet consumer expectations.

Toyota has a hydrogen-powered vehicle now – the Mirai – that refuels in three minutes and has a 400-mile range, he said. But it goes for about $57,000, is available only in California and there are few recharging stations.

His lab is working on ways to bring down costs and build efficiencies. And the challenge of storage exists in every energy environment.

“Even the traditional grid needs storage,” Yan said. “It was built many, many years ago. You design to the highest capacity, based on peak demand. The demand was lower then, now consumption is going up and we have started seeing the limit of our grid. Do we rebuild the grid or put storage into the system?”

Simon also said standards are needed for testing and comparing the technologies.

Transportation may look much different in the future, he said. Instead of buying a car, you might buy a service. That could change a lot of dynamics.

Matt Weed, director of research and development for Open Photonics of Orlando, Florida, spoke about his work in “disruptive technology” and science policy advocacy, and especially his efforts to help those who develop effective new technologies connect with those who need them – getting past what is known as the “valley of death,” where promising ideas die for lack of an outlet that can bring it scale.

Asked about the efficiency of hydrogen fuel cells, Yan said they are 50-60 percent efficient now, higher than the average gasoline engine.

But efficiency is not the only number to consider, he said. Another benefit is the great reduction in carbon dioxide emissions.

“With that environmental benefit, it makes sense to use hydrogen,” he said.

He said battery-powered cars remain in an unsettled competition with fuel cells.

But, he said, there are many challenges remaining on both sides. And he said there is too much uncertainty and too many assumptions to give the economic nod yet to hydrogen, battery or fossil-fueled vehicles.

“There is work in those areas,” he said, “but at this point it is in flux.”

Simon said everyone should know that the most energy efficient car is the old car you own.

“The energy it takes to build a new car is such a big consumption, expending more energy than you can save by any other measure,” he said. “So drive your old car.”

Although, Yan noted, the annual emissions check eventually will cause problems.