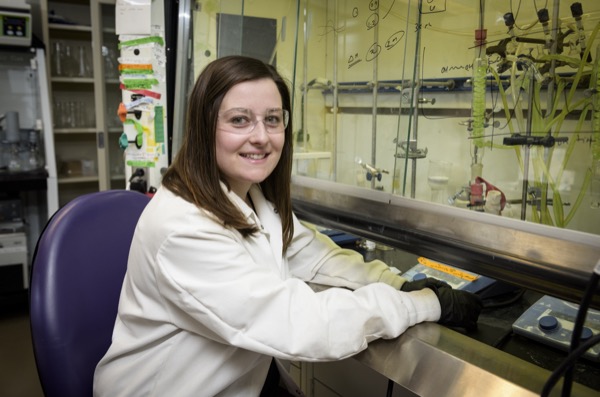 8:49 a.m., April 27, 2016–Melissa Gordon, a doctoral candidate in the Department of Chemical and Biomolecular Engineering at the University of Delaware, has won an Excellence in Graduate Polymer Research Award from the American Chemical Society(ACS).

The symposium recognizes outstanding graduate students in polymer science and engineering, fosters networking and exposure, and helps to develop the careers of future leaders in the field. This year’s symposium featured the work of 31 students, with 22 oral presentations and nine posters.

Gordon delivered an oral presentation on her research, which focuses on developing novel stimuli-triggered polymer networks for self-healing applications.

“Stimuli-triggered processes found in nature, such as the contraction of our eyes in response to bright light or healing after a cut, motivate the design of ‘smart’ materials that can respond to environmental cues, such as light, temperature or pH,” Gordon says.

In the work she presented at the ACS symposium, Gordon described a fundamentally new type of smart material in which dynamic bonds are built into the material at the molecular level, enabling the material to both heal and strengthen on demand in response to light. The final material properties can be easily tuned for a variety of applications, including space suits that can repair pinhole punctures from orbital debris and improve astronaut survivability during space exploration.

The material has been selected by NASA for environmental testing on the International Space Station in 2017 so that the researchers can learn more about how it will respond in the extreme environment of outer space. Beyond self-healing, the material has potential applications in hydrogels, functionalized surfaces and cell culture platforms.

Gordon, who has accepted a faculty position at Lafayette College beginning in January 2017, is co-advised by Norman Wagner, the Unidel Robert L. Pigford Chaired Professor of Chemical and Biomolecular Engineering, and Christopher Kloxin, assistant professor.

“Melissa is an NSF Graduate Fellow, a Delaware Space Grant Consortium Graduate Fellow and a co-author and scientist on our NASA International Space Station project slated for launch within the year,” Wagner says. “She is an excellent role model for aspiring female engineers.”