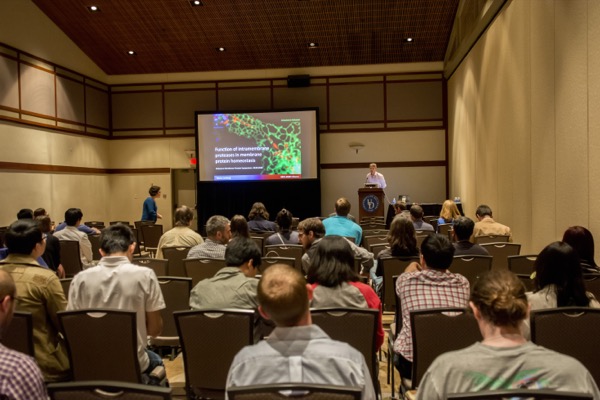 COBRE symposium focuses on proteins of interest to health and disease

11:07 a.m., April 20, 2016–More than 100 scientists and engineers from academia, industry and government turned out for the eighth membrane protein symposium at the University of Delaware on Monday, April 18.

The event was sponsored by the COBRE on Membrane Production and Characterization, which is supported by the National Institutes of Health (NIH) and led by Abraham M. Lenhoff, Gore Professor of Chemical Engineering in UD’s Department of Chemical and Biomolecular Engineering.

Membrane proteins, which represent more than 30 percent of the human genome, are of great interest in understanding and treating disease. Despite recent advances in protein characterization, challenges remain in expressing membrane proteins in significant quantities, in isolating and purifying them, and in crystallizing them.

Eight experts, including keynote speaker Marius Lemberg, shared their latest research findings on the organization and behavior of membrane proteins.

Lemberg, a professor at the University of Heidelberg, discussed his work on intramembrane proteolysis, an important control mechanism in all kingdoms of life from bacteria to humans. Intramembrane proteases have also been linked to viral infections and to diseases such as Alzheimer’s.

Despite a few well-studied examples, very little is known about most of the 13 intramembrane proteases known in humans. Lemberg’s research focuses on elucidating the function of these proteases in physiological processes using approaches ranging from biochemistry and cell biology to bioinformatics.

In addition to technical talks, the program featured more than 30 posters by researchers from UD, the University of Maryland, Lehigh University, Johns Hopkins University, Temple University, NIH, and the NIST Center for Neutron Research.

The Center of Biomedical Research Excellence (COBRE) in Membrane Protein Production and Characterization at the University of Delaware was established in 2000 with generous support under the COBRE program within the National Center for Research Resources (NCRR) of the National Institutes of Health (NIH). Additional support was provided by the Delaware Biotechnology Institute (DBI).

In its original form, the COBRE supported research covering a broad range of activities in structural and functional genomics, but the present focus on membrane protein production and characterization was adopted following renewal of the program in 2005.

The program was renewed again as a Phase III center in 2010; within this structure, it is primarily an infrastructure center that provides direct support for shared core facilities and pilot projects, but the participating investigators involved in the center have independent support for their membrane protein research that draws on center resources and contributes to the overall research progress in the center.