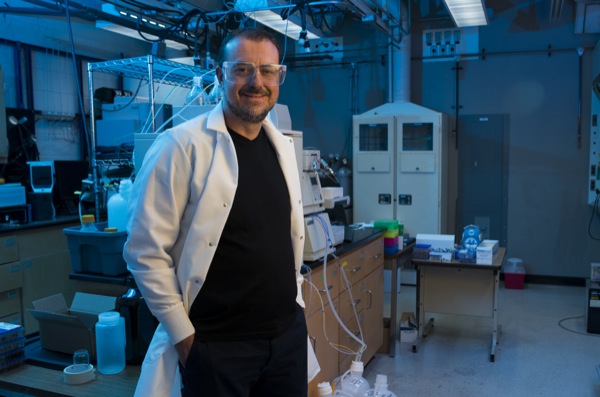 11:41 a.m., Feb. 22, 2016–Mathematical models are used to predict just about everything from traffic and weather to plant metabolism and industrial biotechnology.

However, while they are valuable tools in a broad range of fields, predictive models are still plagued by uncertainties, or errors, and a great deal of effort is directed at determining the extent and effects of these errors.

Now, a team of researchers led by the University of Delaware’s Dion Vlachos has developed a framework to address this issue by looking at the effects of correlated parameters.

Their work appears in a paper published in Nature Chemistry on Monday, Feb. 22.

Vlachos explains that all mathematical models comprise a number of measures, known as parameters. Weather forecast models, for example, include dozens of parameters from temperature and precipitation to wind speed and lightning.

Slight errors in any one of these measures can cause model predictions to veer off course — which is why meteorologists are not sure whether an approaching storm will become a blizzard in the Mid-Atlantic region or swing out to sea just north of the Carolinas and leave kids in Delaware disappointed that they didn’t get a snow day.

In evaluating the effects of such errors, researchers have traditionally assessed each of them separately and then “added them up,” which, as it turns out, can lead to overestimation.

Vlachos uses a simple analogy to explain why.

“If you and a friend each have four reasons for wanting to live in the city, that might sound like a total of eight reasons,” he says. “But if three of your reasons overlap, the list ends up with only five items, not eight.”

“It’s the same with model parameters,” he continues. “When we looked at correlations among parameters and their dependence on each other, we realized that the errors were not nearly as large as we thought they were.”

The paper documents the team’s work on predicting the collective behavior of reaction networks, with the goal of improving chemical transformations in catalysis.

However, the approach has applications in fields ranging from catalysis and combustion to environmental sciences and biology.

“Models are more robust and reliable than we thought they were,” says Vlachos. “It makes sense that the parameters are interdependent and that you can’t change one without affecting the others, whether you’re talking about global warming or wastewater treatment.”

About the research team

Sutton, who earned his doctoral degree at UD in 2014, is now a postdoctoral research associate at Oak Ridge National Laboratory.

Guo is a visiting scholar at UD’s Catalysis Center for Energy Innovation.

Katsoulakis is a professor in the Department of Mathematics and Statistics at the University of Massachusetts, Amherst.

Vlachos is Elizabeth Inez Kelley Professor of Chemical and Biomolecular Engineering and director of the Catalysis Center for Energy Innovation.