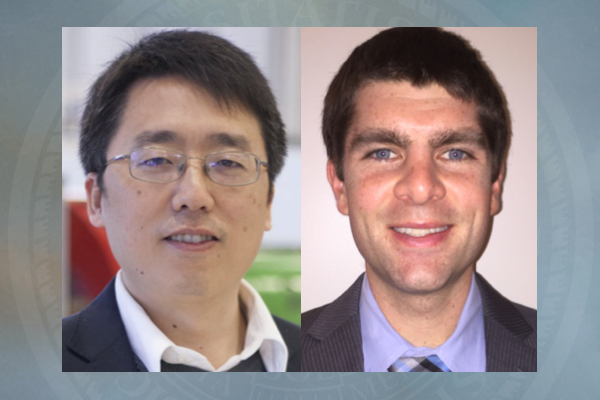 9:55 a.m., Feb. 12, 2016–Two researchers in the University of Delaware’s Center for Neutron Science have won awards from the Neutron Scattering Society of America.

Yun Liu is the recipient of the 2016 Science Prize, and Douglas Godfrin received the 2016 Prize for Outstanding Student Research.

Liu, a research associate professor in the Department of Chemical and Biomolecular Engineering, was cited “for the discovery of dynamic cluster ordering in complex colloidal systems using neutron scattering.”

Liu holds an affiliated research professorship in the Department of Physics and Astronomy, and he is currently a staff scientist at the NIST Center for Neutron Research.

Liu has performed ground-breaking research that greatly expands understanding of colloidal systems, which appear throughout nature — for example, in biological systems such as blood or cellular components — and are also found in foods, paints, personal-care products, and modern composite materials.

He is credited with discovering dynamic clusters in concentrated protein solutions and relating these to previously unexplained changes in viscosity that have profound implications for the production, purification, and administration of biopharmaceutical formulations.

Godfrin, who earned his doctorate at the University of Delaware in 2015, conducted his doctoral research in part at the NIST Center for Neutron Research. He is currently a postdoctoral associate at the Massachusetts Institute of Technology.

Godfrin was cited for “for seminal neutron scattering studies of concentrated protein solutions and protein dynamics with application to biopharmaceutical engineering.”

Godfrin’s work combined theory, experimentation, and simulation to determine the microstructure of concentrated protein solutions, which present challenges for formulators of biopharmaceuticals as well as scientists investigating the cellular environment.

Both will receive their awards at the 8th American Conference on Neutron Scattering, to be held from July 10-14 in Long Beach, California.